Apple unveiled the initial build of its latest desktop operating system at the company's worldwide developer conference (WWDC) in early June 2014. With a bevy of new features, including a tighter integration with other Apple devices and services, on top of some user interface changes, many considered Yosemite to represent a dramatic change for Apple in the desktop arena. Subsequent developer interest seems to have been equally striking, as initial adoption figures of the OS beta version in North America have significantly outpaced those of its predecessor, OS X Mavericks.

According to a new study published by Chitika today, in the three days following the release of the first OS X Yosemite Developer Preview, adoption jumped significantly – hitting 0.20% of total U.S. and Canadian Mac OS X Web traffic. That figure is particularly impressive considering that adoption of the OS X Mavericks Developer Preview achieved only a 0.05% share after 30 days. The increased level of aggregate activity for Yosemite is likely partially driven by the prominent changes present in this OS version fueling a higher degree of developer curiosity and experimentation. The changes to Safari in particular may be prompting a greater amount of Web usage from current users in terms of testing and customization. 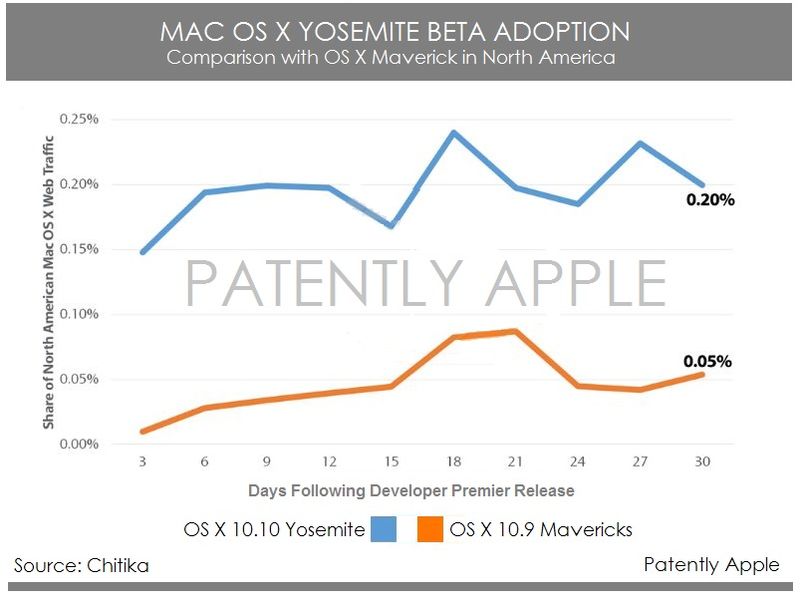 Looking at the patterns across the graph, the brief share jump experienced by both Yosemite and Mavericks slightly over two weeks following their respective debuts corresponds with Apple's release of second Developer Preview editions.

Overall, Chitika notes that the data points to a promising future for OS X Yosemite. In the short term, we expect the operating system's usage share to grow in the wake of the release of the third Developer Preview edition on July 7, 2014. Additionally, with the increased level of developer activity thus far, along with the success of the similarly no cost OS X Mavericks, it's very probable that OS X Yosemite adoption will outpace that of any other previous Mac desktop OS when it is released publicly later this year.

To quantify adoption of OS X Yosemite Developer Preview editions, Chitika Insights sampled hundreds of millions of U.S. and Canadian Mac OS X-based online ad impressions running through the Chitika Ad Network. The data used within the analysis were drawn from impressions catalogued between June 2 and July 2, 2014. To provide a historical comparison with OS X Mavericks Developer Preview adoption, an additional analysis was performed on impressions catalogued between June 10 and July 10, 2013. The data points were then plotted on a three-day rolling average for the purposes of clarity.