Intel's 14nm Core M CPU's Launch this fall, but not for Macs

Intel will launch 14nm-based Core M series processors specifically for use in fanless notebook/tablet 2-in-1 models in the fourth quarter of 2014, with many models to be exhibited at the Intel Developer Forum to take place in San Francisco September 9-11, 2014, according to supply chain makers. The one thing missing here of course – is that Apple's MacBook Air won't be invited to Intel's party.

Intel will release five processors under the Core M series including the 5Y10, 5Y10a as well as enterprise vPro 5Y70, initially to replace its seven 22nm Haswell-based processors including Core i7-4610Y, Core i5-4320Y and Core i3-4012Y, the sources noted.

Following the releases of Core M processors, Intel's 14nm Broadwell will become available in 2015. The H series Core i7 processors will be released in the third quarter of 2015 and Core i5 processors are unlikely to show up until the end of 2015.

Intel will also upgrade its existing 22nm Haswell processors including Core i7-4960HQ and Core i5-4200H in the fourth quarter of 2014. That basically translates to Apple's MacBooks only getting a minor power upgrade later this year.

The fact that Intel will be purposely giving their OEM's a chance to introduce something new that Apple can't match in their MacBook Air for Christmas shouldn't come as any surprise to those who followed Intel's latest moves announced at Computex this year. 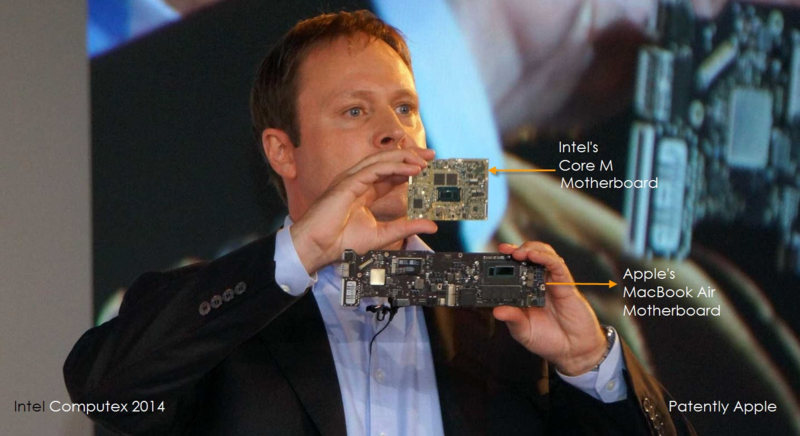 Patently Apple covered Computex in our report titled "Intel Obsessed about Challenging Apple Product Thinness." There was a real focus to show how Intel's Core M Motherboard out engineered Apple's MacBook Air. In May Microsoft positioned their new Surface 3, not against Apple's iPad but rather Apple's MacBook Air. And Wintel is mounting this attack on Apple's MacBook Air because sales of Wintel notebooks have dropped below 90% - mainly due to PC fans rebelling against Windows 8 and its alien interface that's dominant over the traditional Windows desktop UI.

Yet the fact that Intel will purposely delay the 14nm Broadwell until 2015 so that their OEM's can have a distinct advantage over Apple with their new Core M is seen as a little vindictive. And while Intel will try to explain it away, it is what it is.

So how is Apple responding to all of this recent attention that competitors are giving the MacBook Air? By simply launching a new TV ad reminding consumers that the MacBook Air – is the "Notebook People Love."