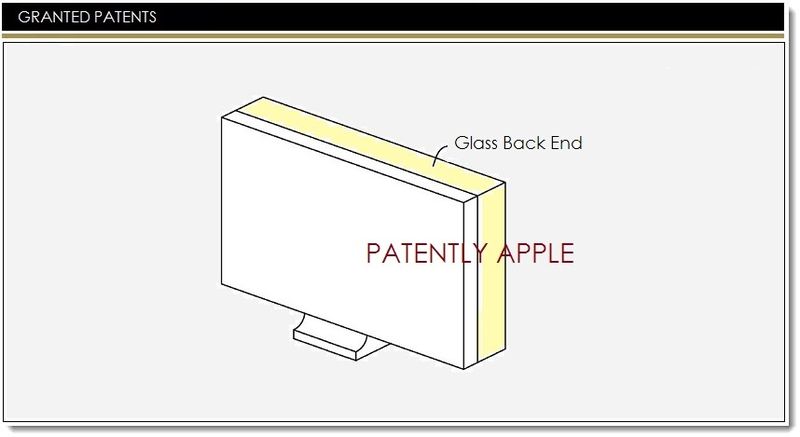 The US Patent and Trademark Office officially published a series of 51 newly granted patents for Apple Inc. today. In this particular report we cover Apple's invention relating to fused glass device housings. As noted in cover graphic, the process could possibly cover a future Apple TV and/or a future iMac which would abandon their long standing love affair with aluminum. The fused glass designs may also extend to future iDevices as illustrated in our report.

Multiple planar glass members may be fused together to form a five-sided box in which electronic components may be mounted. Display structures and other internal components may be slid into place between opposing glass sides of the box." Apple's patent FIG. 23 illustrates this in a diagram showing how glass housing structures formed from a five-sided box of fused glass members may be provided with internal components. 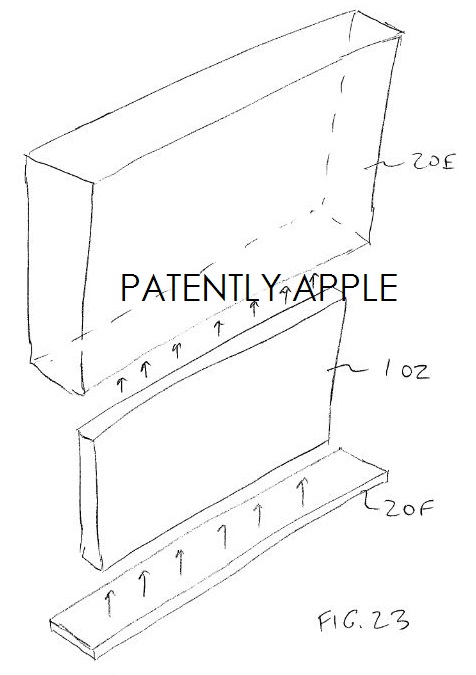 While the design noted above could apply to a future television, according to the patent application, the more realistic application shorter term would be Apple shifting from Aluminum for the iMac to that of glass like the iPhone design. The darkened back panel of glass would be able to hide the iMac's componentry.

It should be noted that Jony Ive has usually been noted on design patents. Yet this granted patent carries the weight of Jony Ive giving this invention more credibility as being one that may be coming to market.

Apple's US granted patent figures including FIG. 23 noted above, is a quick hand drawing. A Patently Apple exclusive report in August 2013 presented Apple's European filing of this patent which provided better graphics as noted below. For more details, see our report titled "Apple Files Patent for Fused Glass Device Housings for TV & More."

Apple's "fusion" process could be further enhanced with Sapphire as noted in our September 2013 patent application report titled "Apple Invents a Fusion Process that Will Add a Sapphire Laminate Layer to iPhone, iPad & Future iWatch Cover Glass." That report covered many possible future devices including "Computers" which would cover an iMac as well.

Yesterday there was some buzz generated by the iPhone Hack website about Apple's iPhone 6 using sapphire cover glass. While there was no way of proving their sample was in fact sapphire glass, in general, Apple's sapphire glass could provide added bendability and durability as was covered in Apple's patent noted above.

Apple credits Apple's Sr. VP of Design Jony Ive and teammates Peter Russell-Clarke and Michael Pilliod as the inventors of granted patent 8,773,848 which was originally filed in Q and published today by the US Patent and Trademark Office. To review today's granted patent claims and details, see Apple's patent.