Apple Granted a Patent for a Secure Enclave Processor

The US Patent and Trademark Office officially published a series of 51 newly granted patents for Apple Inc. today. In this particular report we cover one of Apple's granted patents relating to a Secure Enclave Processor. Such a processor was first introduced in Apple's A7 chip for securing a user's fingerprint in conjunction with Apple's new Touch ID feature introduced with the iPhone 5S. While todays granted patent regarding a Secure Enclave Processor covers authentication, it also covers securing other forms of private data.

Today, Apple has been granted a related patent titled "Trust zone support in system on a chip having security enclave processor." Their invention relates to security on "Systems on a Chip" (SOC) and devices that employ them. SOCs may operate on private user data as well as data belonging to others (e.g. copyrighted audio, video, and still images).

The security of the SOC and its ability to resist attacks meant to compromise secure data are becoming increasingly important features. a secure enclave processor could also be used to secure financial transactions and financial management.

Apple's patent FIG. 1 noted below we're able to see a block diagram of one embodiment of an SOC coupled to a memory. As implied by the name, the components of the SOC may be integrated onto a single semiconductor substrate as a integrated circuit "chip." In some embodiments, the components may be implemented on two or more discrete chips in a system. The Secure Enclave Processor (SEP) is seen below as "SEP 16." 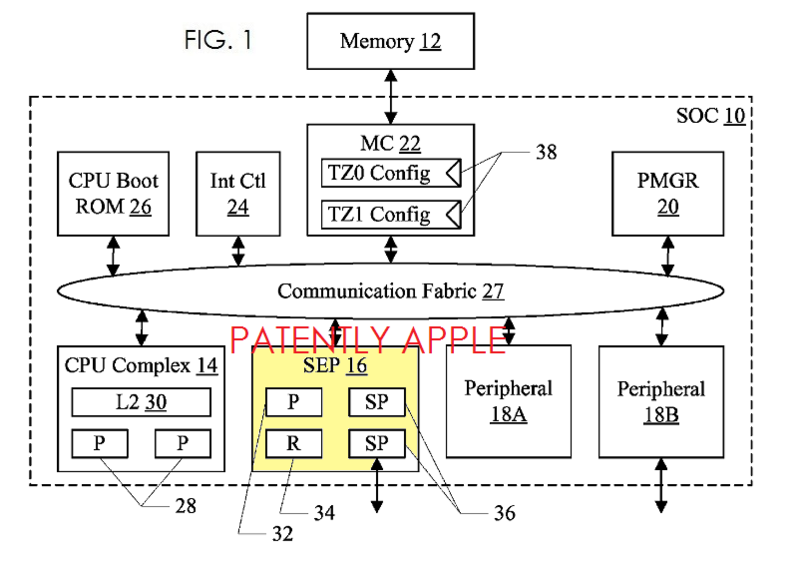 Apple credits Stephen Polzin, James Keller and Gerard Williams as the inventors of granted patent 8,775,757 which was originally filed in Q3 2012 and published today by the US Patent and Trademark Office.

James Keller came to Apple as part of the PA Semi acquisition in 2008 to work on Apple's "A" Series processors. Keller is now with AMD. Gerard Williams is Apple's Sr. Director in Platform Architecture and came to Apple from ARM.