A new ABI report published today illustrates that Apple and Samsung account for the majority of the top 20 smartphone models sold worldwide in Q1 2014. Apple's flagship iPhone 5S clocked in as the number one smartphone around the world. Samsung's heavily marketed flagship device Galaxy S4 i9500 16GB came in second. Although Samsung's Galaxy S5 was shown at Barcelona's Mobile World Congress this past February, it didn't acutally launch publicly until the beginning of Q2 so it naturally didn't show up in this latest ABI report. 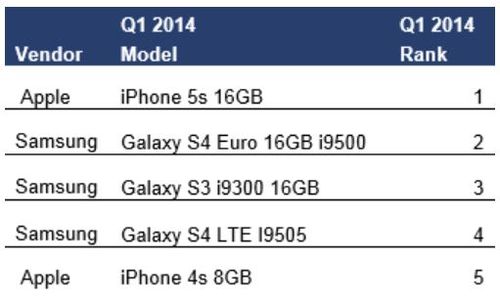 According to ABI's report, Sony, LG, and for the first time, Xiaomi make up the rest of the top 20 models, with Huawei dropping out. The other smartphone vendors are struggling to compete with Apple and Samsung's huge flagship device marketing budgets, both above the line and in channel. ABI Research expects Huawei and HTC to bounce back in to the top 20 after the launch of their flagship devices the HTC One M8 and the Huawei Ascend P7 in Q2 2014.

Last week we posted a report titled "Apple Continues to Trounce Samsung in Smartphone Sales in US." Today's ABI report simply extends the iPhone 5S's leadership around the globe.