Retina Displays for the Mac and Wireless Charging on the Way

Intel revealed a number of new technologies this week at Computex 2014 that will be coming to market in the not-too-distant future. Intel will be improving the PC experience by delivering an immersive experience through stunning visuals. In order to bring this to mainstream users, Intel is enabling high quality 4K 23.6 inch PLS monitors through its ecosystem partners and today announced they will be available at half the price, as low as $399, by the end of the third quarter. Intel has also enabled sub $1000 Intel Core based 4K all-in-one PCs, shipping by the end of July. That's exciting news to be sure as the industry moves towards 4K displays. In fact, last week news began to surface that the iMac may support new high-end Retina displays later this fall.

Last week MacRumors noted that OS X 10.9.4 beta the Retina Displays may be coming to the iMac which could translate to Apple's Thunderbolt displays as well. A new report out of France via MacBidouille confirms higher display resolutions will be supported as noted by Eric Slivka earlier this afternoon.

A list of other Intel technologies and chips coming to market this year could be reviewed here (PDF). One of the other big-news technologies getting some buzz today concerns Intel's post-Broadwell "Skylake" reference design. In short, Intel aims to eliminate all PC cables sometime in the 2015 and 2016 timeframe.

CNET's Seamus Bryne reported today that "For power, Skaugen demonstrated Rezence, the magnetic resonance charging technology, promoted by the Alliance 4 Wireless Power (A4WP), that Intel is aligned with. The system can be installed under a table surface, with magnetic resonance capable of charging through 2 inches of wood. It can also charge any number of devices at the same time, unlike inductive charging technologies."

Patently Apple first covered Apple's patent application regarding "magnetic resonance charging technology back in November 2012 in a report titled "Apple Nails Future Wireless Charging System." One of the graphics from that patent application is noted below.

Intel's noted timeframe for bringing this technology to market as a starting point supports our follow-up report that we titled "The Cordless Home is now in Reach with Magnetic Resonance." In that report we covered the various alliances supporting this next generation technology. That may spell some trouble ahead in respect to standards and the like, and as always, Apple is not revealing their cards as to which alliance their backing. But that's a story for another day. 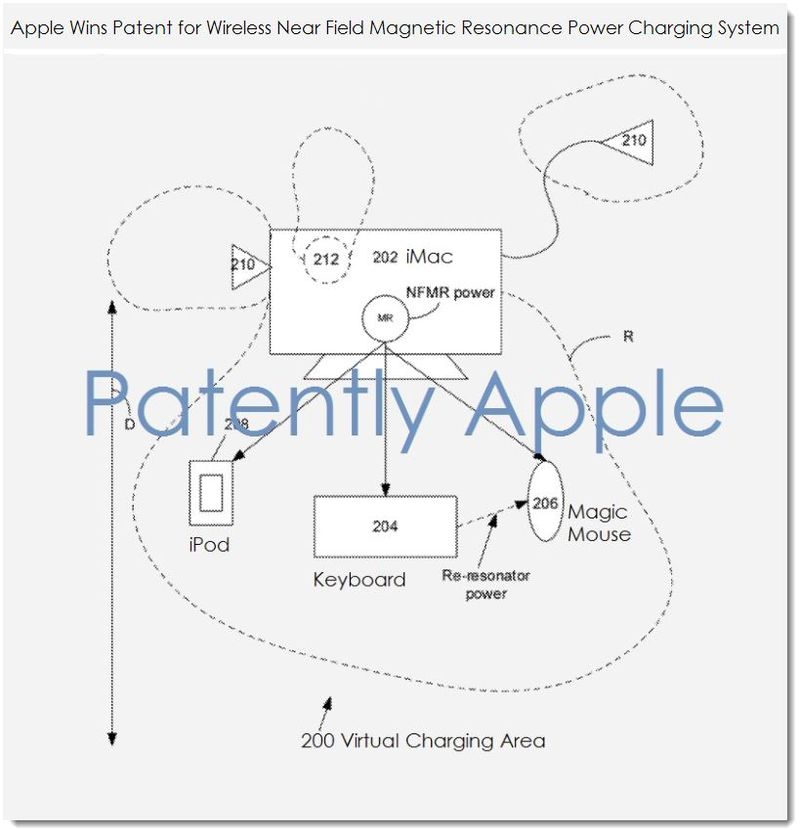 The cool thing to this is that we reported that the cordless home was now in reach and Intel's big push is only going to expedite the wireless charging revolution. This is good news because it also means that Apple's work on this front mustn't be too far behind. If we're lucky, Apple may even take the lead. Yet as always, only time will tell.