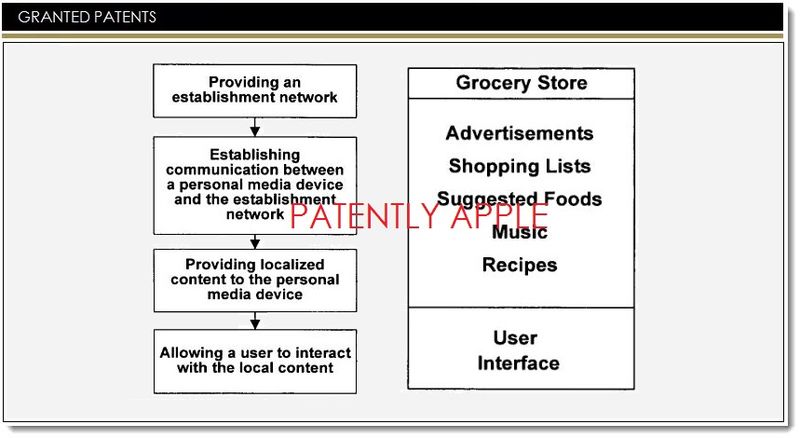 The US Patent and Trademark Office officially published a series of 64 newly granted patents for Apple Inc. today. In this particular report we cover granted patents covering Apple's iBeacon, the Magic Trackpad's gimbal press, Gesture Mapping as it relates to image filters and five design patents. We wrap up this week's granted patent report with our traditional listing of the remaining granted patents that were issued to Apple today.

Apple has been granted a patent today for their invention relating to personal media devices with wireless communication capability and applications thereof. More specifically, the invention relates to Apple's iBeacon.

Apple's patent FIGS. 15A-G show embodiments of several different types of location-based content that may be provided to a media device in accordance with the principles of the present invention. FIG. 15A indicates various location-based content that may be provided in connection with a merchant that sells goods and articles of manufacture. For example, a user may access music (e.g., being freely broadcast by the establishment or for sale on content source), advertisements (e.g., coupon specials, video advertisements, and audio advertisements), event calendar (e.g., to learn of exciting new events that may be occurring at the merchant), virtual card information may be exchanged, podcast, general information on merchant (e.g., return policies), product information (e.g., graphics of products, reviews of products, etc.), or any other suitable information pertinent to the merchant. 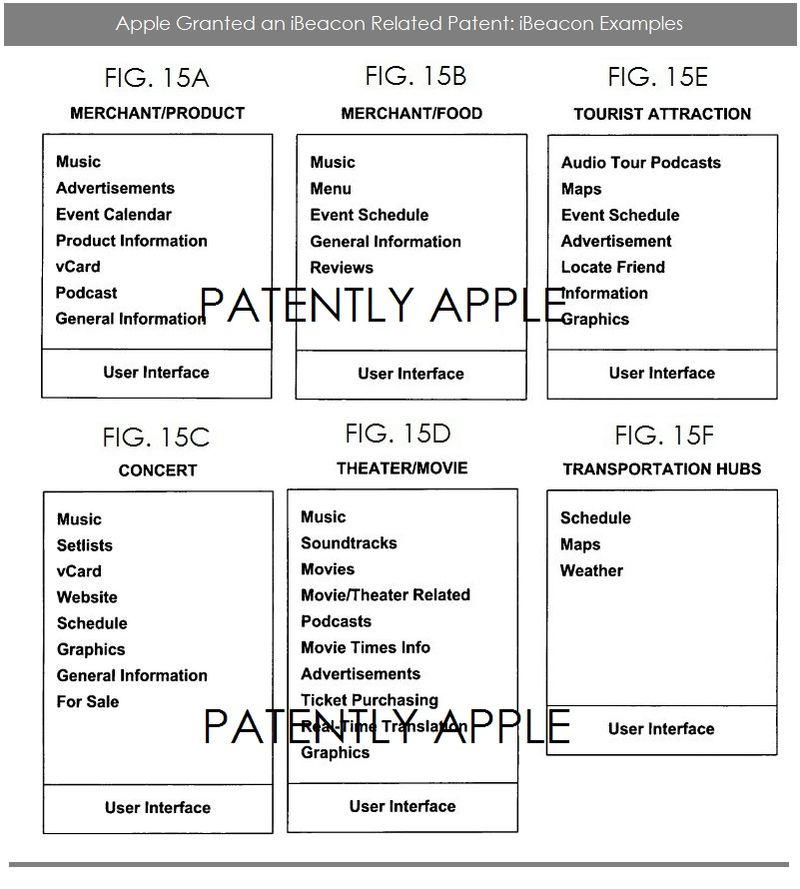 Apple's patent FIG. 15B indicates various location-based content that may be provided in connection with a merchant that sells food (e.g., a restaurant). For example, such a merchant may provide music (e.g., for purchase or for free listening), a menu (e.g., from which a user may place orders for foodstuffs), event schedule, general information on the merchant, reviews (e.g., Zagat survey), and any other suitable information pertinent to the merchant.

Apple's patent FIG. 15C indicates various location-based content that may be provided in connection with a concert or other music venue. A concert or music venue may provide content including, for example, music, setlists, virtual cards, website information, schedule information (e.g., for upcoming shows at the venue), graphics (e.g., album art, pictures of the band members, etc.), ticket sales (e.g., provide user option to purchase tickets in advance), general information relating to the concert, or any other information.

Apple's patent FIG. 15D indicates various location-based content that may be provided in connection with a theater or movie. For example, local content may include music, soundtracks (e.g., for purchase from a content source), movies (e.g., for purchase from content source), podcast (e.g., audio commentary relating to the movie such as director's commentary), showtime schedule, advertisements, ticket purchasing, real-time translation (e.g., if a foreign file or an opera in a foreign language), graphics, or any other suitable information.

Apple's patent FIG. 15E indicates various location-based content that may be provided in connection with a tourist attraction (e.g., a museum or zoo). Local content may include, for example, audio podcasts, maps, event schedule, advertisements, general information, graphics (e.g., animal pictures), and any other suitable information. Because tourist attractions can be relatively large (e.g., Disney World) and children often frequent such places, parents may be concerned of a child's whereabouts if not directly within their sight. Assuming the parent and child both have a media device, and the tourist attraction or other large area (e.g., city) has a distributed network, a location program may be executed to determine the location of the child's media device.

Apple's patent FIG. 15F indicates various location-based content that may be provided in connection with a transportation hub (e.g., an airport, bus station, or train station). Localized content may include, for example, schedules, maps, weather, city information, or any other suitable content.

Apple's patent FIG. 15G indicates various location-based content that may be provided in connection with a merchant that sells groceries. Localized content may include, for example, advertisements (e.g., weekly flyer), shopping lists, suggested foods (e.g., to adhere to a preferred eating lifestyle such as vegetarian), recipes, music, and any other suitable content.

Apple credits Michael Rosenblatt as the sole inventor of granted patent 8,718,620 which was originally filed in Q4 2006 and published today by the US Patent and Trademark Office.

Apple's iBeacon has been in the news recently with these reports:

Apple has been granted a patent today for their invention relating to the manufacture of computing or other electrical devices, and more particularly to the assembly of pressure sensing diaphragms for use in electrical devices such as the MacBook Pro's trackpad and Apple's Magic Trackpad. 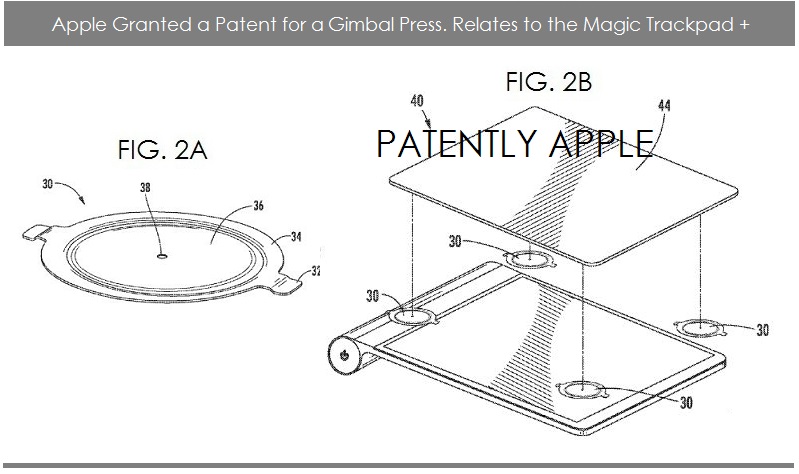 More specifically, Apple's patent is for a computing device which includes a touchpad having a plurality of internal diaphragms that allow the touchpad to sense downward force inputs. The diaphragms are evenly glued about their circumferential edge portions to an internal flat surface by way of a gimbal press. The gimbal press can include a force delivery component coupled to an upper plate having an internal depression, a lower plate having a ball bearing that accepts force from the upper plate via the internal depression, a flexible ring member, and a compliant annular component. Both plates have a plurality of interlocking features with grooves extending therethrough that accept the flexible ring member. Force is evenly distributed to the diaphragm via a gimbal effect at the ball bearing, and the flexible ring member centers the upper and lower plates with respect to each other while permitting some relative tilt and rotation between the plates.

Apple credits Patrick Kessler as the sole inventor of granted patent 8,715,438 which was originally filed in Q2 2011 and published today by the US Patent and Trademark Office.

More specifically, Apple's patent pertains to systems, methods, and computer readable medium for mapping particular user interactions, e.g., gestures, to the input parameters of various image processing routines, e.g., image filters, in a way that provides a seamless, dynamic, and intuitive experience for both the user and the software developer. Such techniques may handle the processing of both "relative" gestures, i.e., those gestures having values dependent on how much an input to the device has changed relative to a previous value of the input, and "absolute" gestures, i.e., those gestures having values dependent only on the instant value of the input to the device. Additionally, inputs to the device beyond user-input gestures may be utilized as input parameters to one or more image processing routines. For example, the device's orientation, acceleration, and/or position in three-dimensional space may be used as inputs to particular image processing routines.

In Apple's patent FIG. 14 noted below we're able to see nine various images filters on the display of a personal electronic device, in accordance with one embodiment; FIG. 16 illustrates an image overlay preview grid for a twirl image filter. 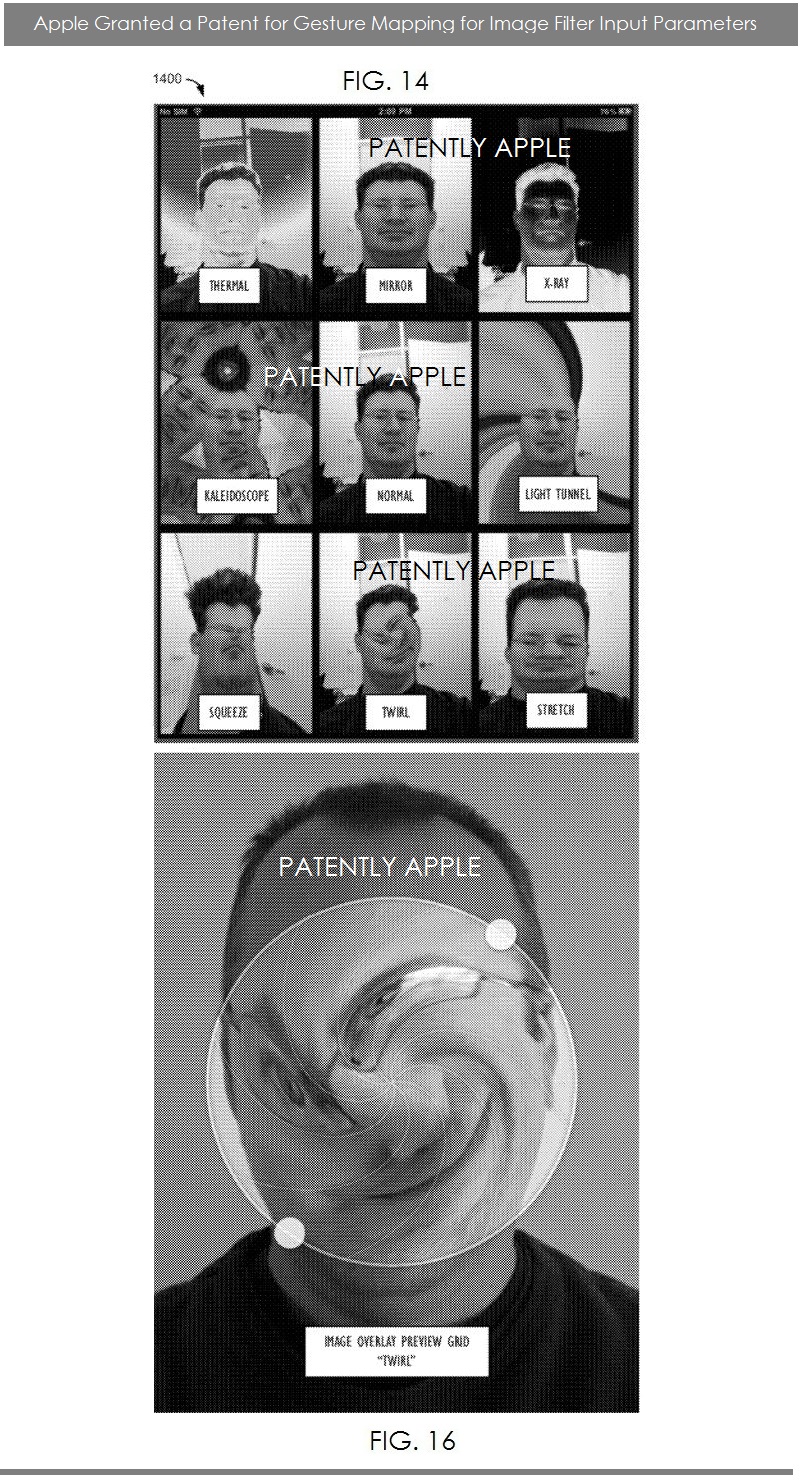 Apple credits David Hayward, Chendi Zhang, Alexandre Naaman, Richard Dellinger and Giridhar Murthy as the inventors of granted patent 8,717,381 which was originally filed in Q1 2011 and published today by the US Patent and Trademark Office.

One More Thing: Another Apple site reviewing Granted Patent 8,717,199 today is trying to make it out that this patent is applicable to a future Apple iWatch.

The patent dating back to 2008 was specifically designed for the iPod shuffle that had a clip. Apple states in their patent relates to "Electronic devices that use the configurable buttons may include, for  example, portable electronic devices such as wearable media players." Apple further notes in their summary that "A user often desires to physically manipulate a portion of an  electronic device without activating buttons on the device.  For example, a user of a small portable media player that has a clip might  desire to squeeze the clip to attach the media player device to an article of clothing." There's absolutely no context to a "wearable computer" only to "wearable media players" that related to the iPod shuffle, end of story.