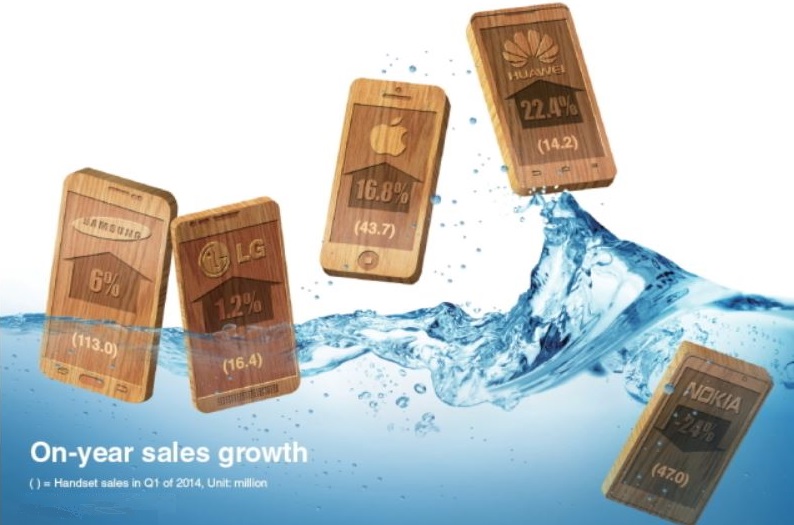 A new report published yesterday by market research firm Strategy Analytics shows that Apple's iPhone sales grew an impressive 16.8% year-over-year, significantly above Samsung's anemic 6%. Apple was only second to Huawei who scored an impressive year-over-year growth of 22.4%. Yet some of the other statistics that were presented in Strategy Analytics' charts skewed Apple's real position.

The Strategy Analytic report starts off by stating that global mobile phone shipments grew 9 percent annually from 372.7 million units in Q1 2013 to 407.9 million in Q1 2014 and were at their highest level since 2011, driven by healthier demand for 4G and 3G models across Asia, Africa and elsewhere. That's all fine and dandy.

Then the report states, if not clarifies, that "Smartphones accounted for 7 in 10 of total mobile phone shipments during the quarter." This is a key factor to remember especially when the stats start flying around about Apple only being 1% behind Nokia. Say what?

Yes, Nokia makes millions of non-smartphones and it skews the numbers against Apple. On a smartphone-to-smartphone basis, Nokia isn't in the same league as Apple. If they were, they would still be an independent company today. Even putting Apple and Nokia in the same sentence for growth was an apparent propagandist move on the part of Strategy Analytics, in my view.

That also skews Samsung's numbers and position against Apple. Firstly, the study refused to breakout the percentages of Samsung's "mobile phones" into the two camps of smartphones and mobile phones. Generally we know that 7 in 10 are smartphones, but by company, the mix could be staggeringly different.

Secondly, Apple's iPhone numbers of 43.7 million units are based on what they "sold" not what they shipped. In contrast, the study focused on tricky Samsung numbers that are based on units "shipped." This is a common Samsung marketing trick that's well documented in the press. In fact, a 2011 report showed that it was the very same "Strategy Analytics" that accommodated Samsung's skewed numbers in the "sold vs shipping" game even back then.

Considering that Apple doesn't sell dumbed-down "mobile phones," the numbers can't really be compared to Apple's correctly. And when Strategy Analytics states that Samsung's mobile phones grew by 6%, it's highly unlikely that this tiny gain was all in the smartphone column. So we're actually blind as to what Samsung "shipments" were for their smartphones and we have no idea what they actually sold. In the end, it's just a statistical mess called a study.

Then again, at least we know that Apple's iPhone (pure smartphone) growth sailed past Samsung's total mobile phone growth (whatever the mix really was) year-over-year. So in that sense, the Strategy Analytics report wasn't a total dud.

About Making Comments on our Site: Patently Apple reserves the right to post, dismiss or edit any comments. Comments are reviewed daily from 4am to 7pm PST and sporadically over the weekend. Graphic credit to Nam Kyung-don