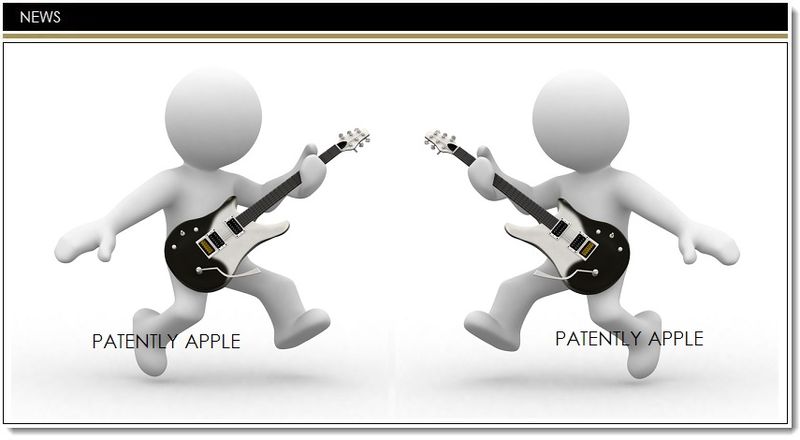 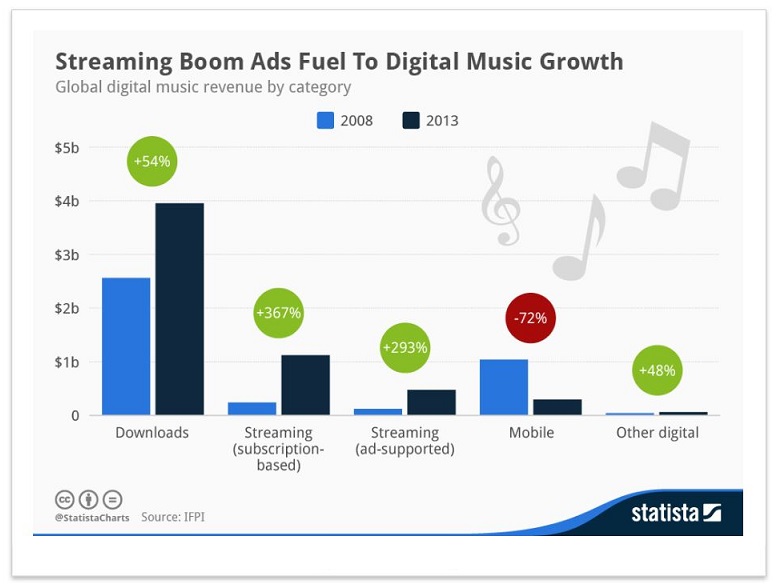 While services such as Pandora, Spotify and iTunes Radio are just taking off, Apple is reportedly thinking about launching an on-demand streaming service that goes beyond iTunes Radio and possibly considering a version of iTunes for Android. However, for the time being, iTunes remains the leading music platform and that makes it a strong selling point for why consumers should choose the iPhone over competing phones. So it may not be the time for an Android version of iTunes just yet.

Digital Downloads Still the King of Music in 2013 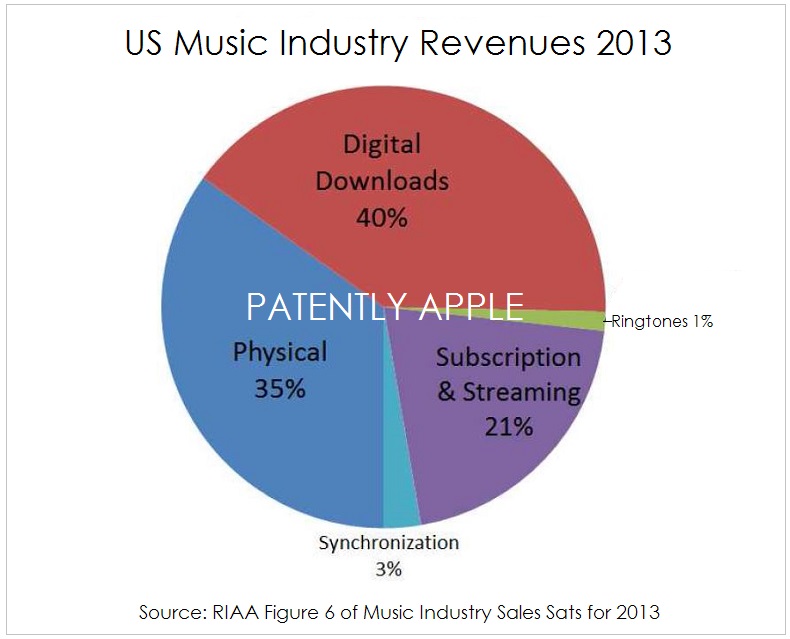 Specifically, revenues from permanent digital-downloads (including albums, single tracks, videos, and kiosk sales) only declined 1.0% to $2.8 billion in 2013 despite the big hoopla over gigantic gains from subscription services.

The digital-downloads statistical breakdown reveal that there were 118.0 million digital albums sold in 2013, up 1.1% in 2013. Total value of digital albums was $1.2 billion, up 2.4% versus the prior year. However in total sales, digital track volume was down 4.5% with value of tracks down 3.4%. That's why Apple introduced iTunes Radio so as to make up for variances in download sales.

Yet by fairly studying the Recording Industry Association of America's (RIAA) published statistics and seeing music streaming market share gains versus the almost invisible download market loss, we see good news. It's showing us that the streaming music segment is bringing new customers to the music table with very little negative impact on downloads. It's not like streaming music's growth of 39% in 2013 meant that downloads lost 39%. There is no such correlation.

A 1% drop in download sales means very little, especially when you break down the finer stats in this sector to find out that Ringtones fell a whopping 43% and music videos were down by close to 30%. That's where the real drop in downloads actually occurred.

So in the bigger picture, the gains that are found in the streaming music's market share are showing us, to a certain degree, that streaming is growing the music industry pie and not simply redistributing its wealth.

The one exception is that music streaming is likely taking some share away from physical format sales of CD's which is understandable. According to the RIAA, shipments in physical formats continued to decline in 2013, overall down 12% in value from $2.8 billion in 2012 to $2.4 billion in 2013.

In the end, there seems to be a grand marketing game being played out in the public these days by positioning download services like iTunes in a negative light and to champion streaming services that favor Android. In reality, subscriber growth in a sea of download music lovers is not a trend yet to fret over. The chart below from the RIAA shows us that there were only 6 million new subscribers in 2013. It's not like Noah of the music world has to start building an Arc to survive the coming storm. 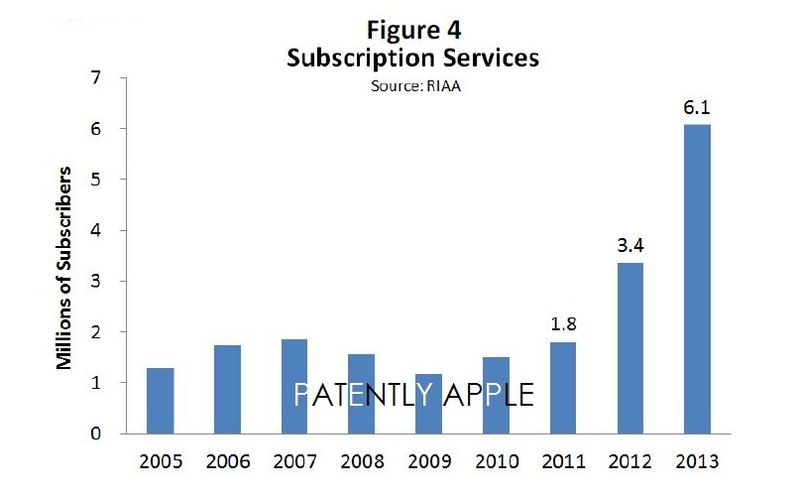 Yet when you look at how Business Insider is framing it today, you'd think that the music download market is being crushed by music streaming services. That's so far from reality it's not funny.

For music lovers who have established music libraries, streaming music will never be an option. My investment will keep me and tens of millions on the download market side of the equation forever. And if more exciting artists release quality albums in the years ahead, download sales will continue to sustain if not grow their share. Look at the wild response there was to Beyoncé album on iTunes with 828, 773 albums sold in just three days. This proves out that if the quality of music is available, music lovers will download it. Yes, it's the old 'if you build it, they will come" reality.

For the Android camp, the uptake cycle for new operating system versions is problematic in keeping a music download music service in step. It's probably why Apple is taking its time in bringing iTunes to Android. So music streaming services are trying to fill that void in Android's platform and are having success because the youth market with Android phones need something to fill that void with. The growth in music streaming services business is in step with the increase in Android smartphone growth.

How Apple intends to address some of the new emerging trends beyond iTunes Radio this year is unknown at this time. However, to be sure, the world isn't going to end in 2014 and the music streaming flood isn't going to wipe out the download music business anytime soon – even if the Android camp will keep trying to make it sound that way in the press.

Despite the fuzzy math in the press, Apple's iTunes downloading platform is still King of the hill and all of the major labels know that.