Background to the Case

MAZ Encryption Technologies formal complaint before the court provides background information as follows: "Stephen J. Zizzi is an accomplished electrical engineer and the inventor of United States Patent number 8,359,476. In 1996, Mr. Zizzi and Chris Mahne, an entrepreneur and co-inventor on another patent, launched MAZ Technologies, Inc. to develop software security products. Mr. Mahne was the President of MAZ Technologies, Inc., and Mr. Zizzi was the Chief Technology Officer.

While at MAZ Technologies Mr. Zizzi developed novel technologies relating to electronic information and document security using file-level and biometric encryption. The MAZ technology includes, among other things, information security that is transparent and seamless to the users. 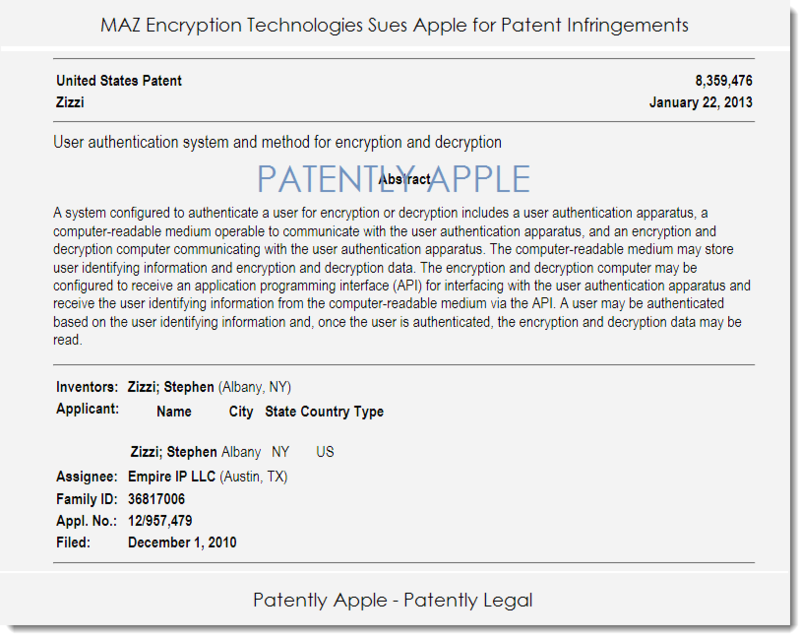 What their background information doesn't provide us with is a list of the companies that actually use their technology. As from what we could tell, MAZ spends most of their time suing companies like Apple, Dell, Oracle, McAfee, HP and other companies like Lenovo, Fujitsu, BlackBerry, Toshiba and Microsoft with the same two patents. MAZ sued Apple a year ago with their other patent 7,096,358.

The patent infringement case presented in today's report was filed in the Delaware District Court, Wilmington Office. The Presiding Judge in this case is noted as being Judge Leonard P. Stark.

Is MAZ Encryption Technologies a patent troll? This time it's a tougher call than most because Mr. Zizzi is the actual inventor of the patent who is suing Apple vs a patent assertion entity acquiring a patent for the sole purpose of filing a suit. If a small company invents something important but is simply ignored or steamrolled by larger and richer companies, their only recourse is to sue to defend their technology. Of course, that doesn't automatically mean that MAZ's claims of patent infringement against Apple are legitimate – so off to court they go. But by definition, MAZ Encryption Technologies doesn't appear to be a classic patent troll.