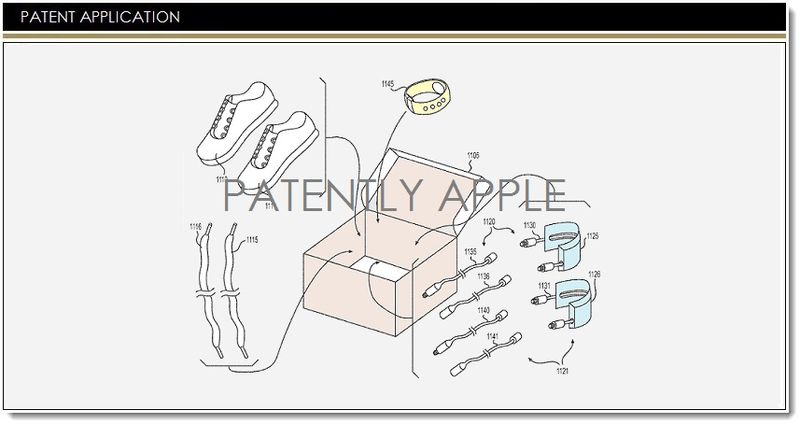 On March 27, 2014, the US Patent & Trademark Office published a patent application from Nike that reveals a new motorized footwear adjustment system that will work with the Nike-Apple created Nike + iPod system. Nike's idea is absolutely crazy, but I like it. Nike's new system will allow professional athletes and sporting enthusiasts alike to program their running shoes so that they could attain the ultimate comfort level each and every time they put their runners on. It'll provide athletes with a snugness that's unique to their needs. It's an automatic shoe lace adjustment system on steroids. Your laces will never come undone again at any time. More importantly, Nike's patent clearly confirms that this new system will work with Apple's iPhone and the Nike + iPod system including the iPod sensor. Yes, there's a new Nike + iPod system update in the making and many sporting fans will truly appreciate Nike's attention to detail and for making their next generation footwear even that much more comfortable for their hard runs and gaming needs.

Nike Invents a Motorized Adjustment System for Next Generation Footwear

One of Nike's latest patents were published today by the US Patent and Trademark Office. Their invention generallly relates to articles of footwear that include a removable motorized adjustment system.

Articles of footwear generally include two primary elements: an upper and a sole structure. The upper is often formed from a plurality of material elements (e.g., textiles, polymer sheet layers, foam layers, leather, and synthetic leather) that are stitched or adhesively bonded together to form a void on the interior of the footwear for comfortably and securely receiving a foot.

The upper may also incorporate a lacing system to adjust the fit of the footwear, as well as permitting entry and removal of the foot from the void within the upper.

This is the focus of Nike's new invention that will be linked to a future version of Nike + iPod as you'll see as our report progresses. Nike has invented an over-the-top insanely cool motorized tensioning system for footwear for professionals and enthusiasts who want the latest tools to protect their feet while power walking, running and performing many other sports and activities.

Nike's tensioning system may include a tensile member and a motorized tightening device configured to apply tension in the tensile member to adjust the size of an internal void defined by the article of footwear.

In some embodiments, Nike states that the power source may include one or more batteries. The power source is only intended as a schematic representation of one or more types of battery technologies that could be used to power the motorized tightening device. One possibly battery technology that could be used is a lithium polymer battery. The battery (or batteries) could be rechargeable or replaceable units packaged as flat, cylindrical, or coin shaped. In addition, batteries could be single cell or cells in series or parallel.

In yet another embodiment, Nike states that inductive charging could be used for charging one or more batteries. For example, a charging antenna could be disposed in a sole structure of an article and the article could then be placed on a charging mat to recharge the batteries.

In different embodiments, control of a motorized lacing device can be accomplished using various methods and devices. In Nike's patent FIG. 38 we're able to see how the system will work with various kinds of remote devices, including an RF based control bracelet shown as #390. The control bracelet may incorporate one or more buttons for sending commands to a motorized tensioning device.

In some cases, the control bracelet may include buttons for initiating incremental tightening and incremental loosening commands. In still other cases, additional buttons can be included for initiating any other commands including the open command (or fully loosen command), store tension command and return to stored tension command. Still other cases could incorporate any other buttons for issuing any other kinds of commands.Patent FIG. 31 specifically illustrates an iPhone in use with the new system. 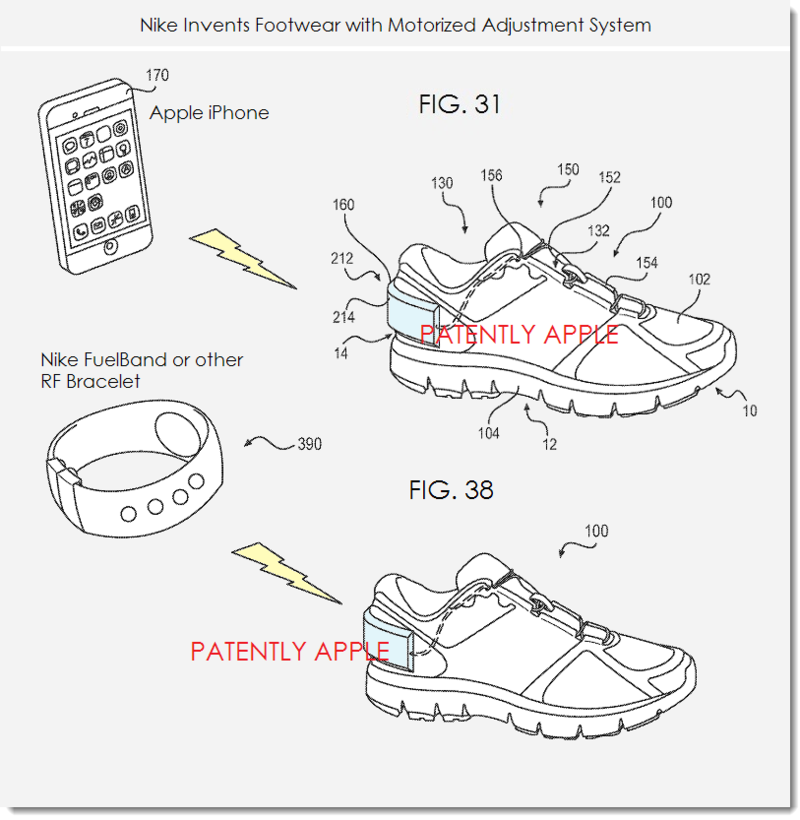 In some other embodiments, buttons for tightening, loosening and/or performing other functions can be located directly on an article. As an example, some embodiments could incorporate one or more buttons located on or adjacent to the housing of a motorized tensioning device.

In still other embodiments, a motorized tightening device maybe controlled using voice commands. These commands could be transmitted through a remote device, or to a device capable of receiving voice commands that is integrated into the article and in communication with the motorized tensioning device. Think Siri enabled. 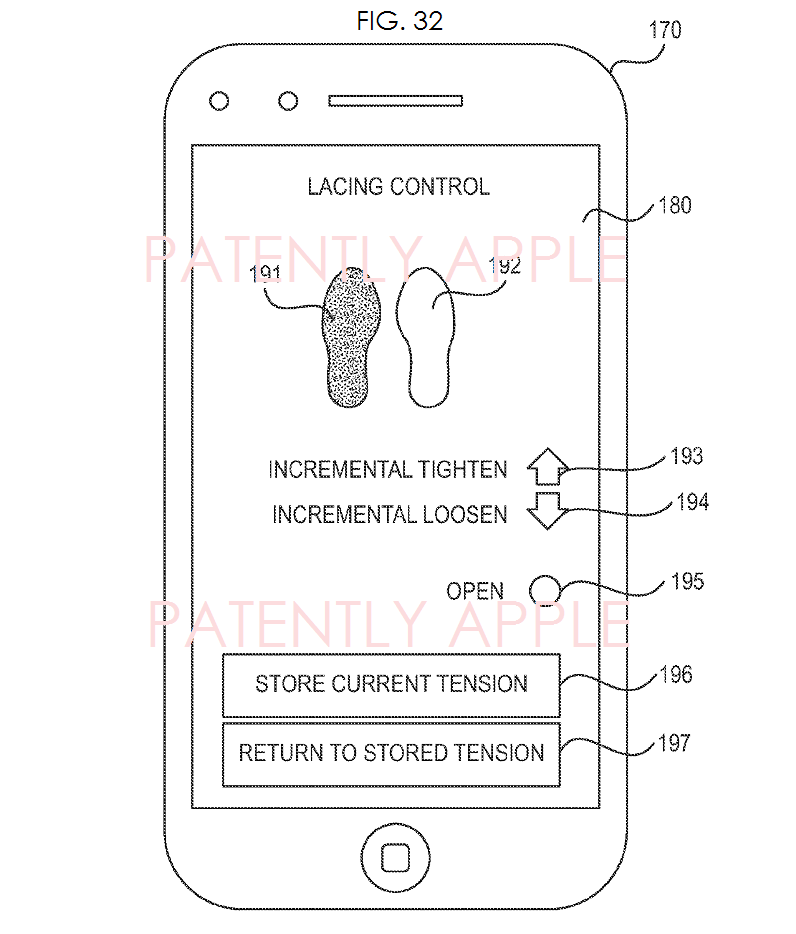 All of the following patent figures relate specifically to the Nike + Systems interfaces to control the new motorized footwear adjustment system: 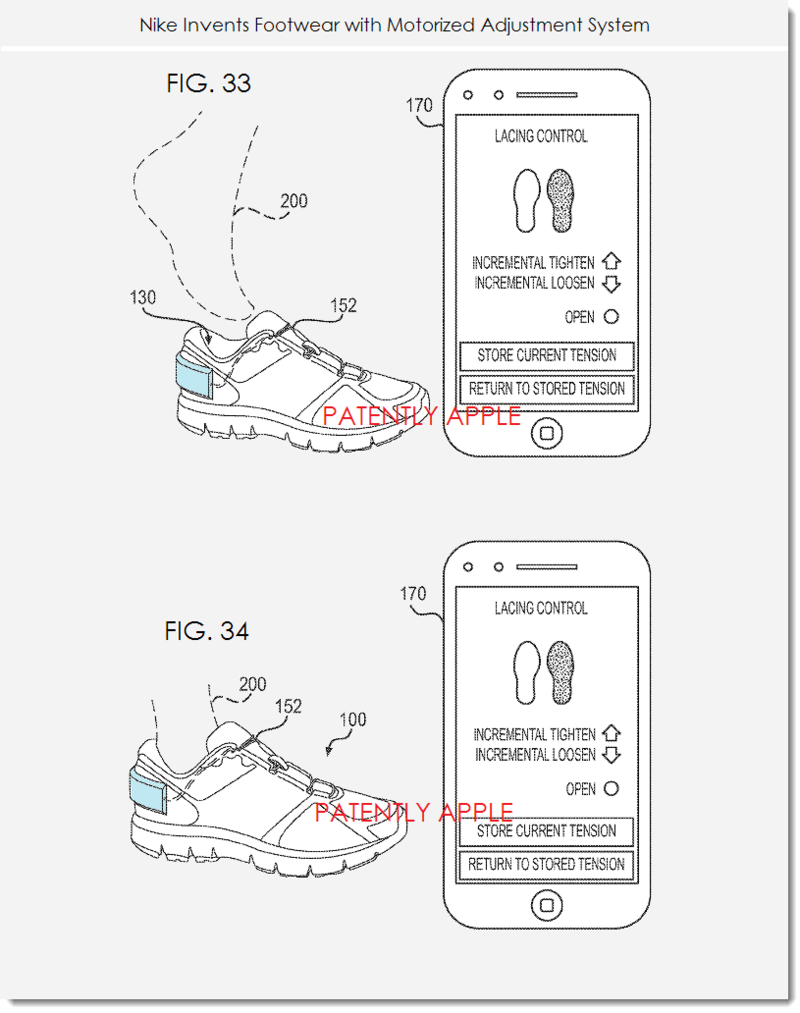 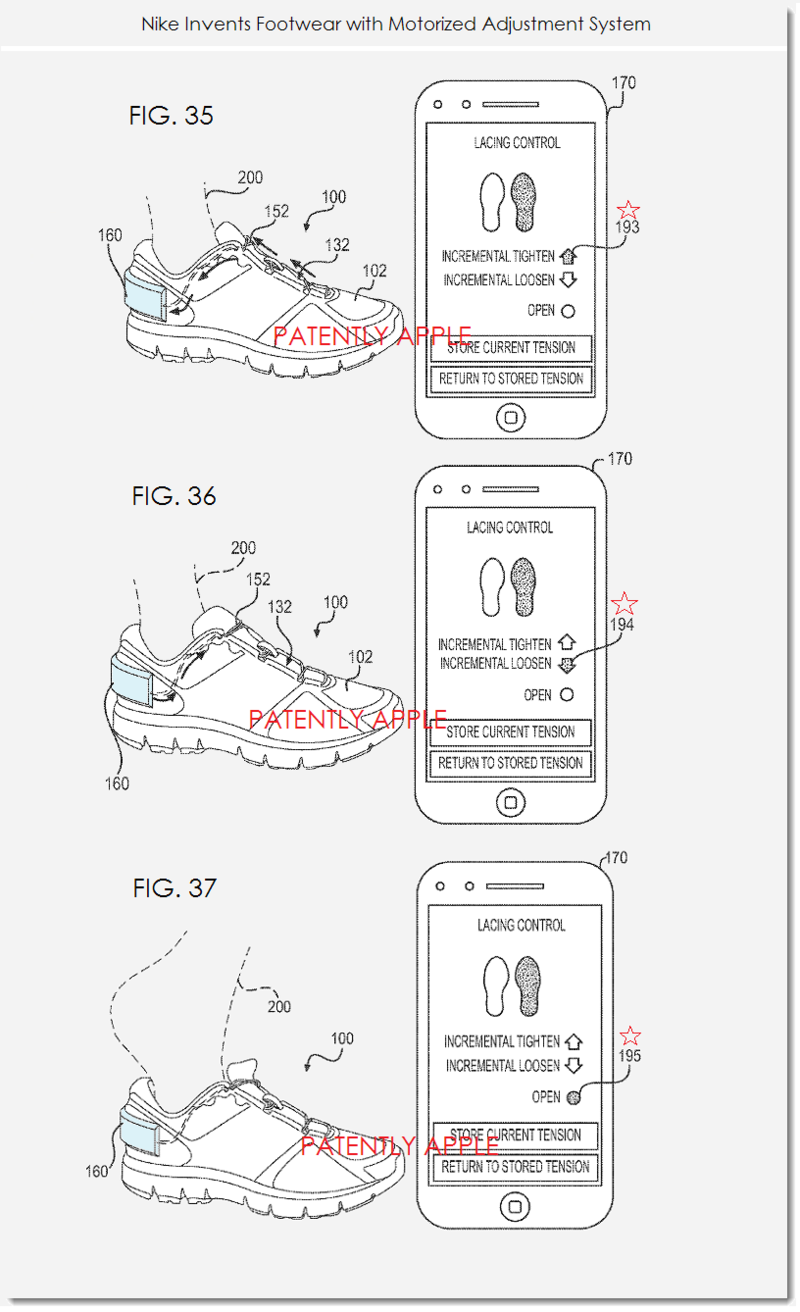 Nike's patent FIG. 46 is a schematic view of an article of footwear having an attachable tensioning system and showing select components of a sole structure of the footwear – which is the classic Nike + iPod sensor. 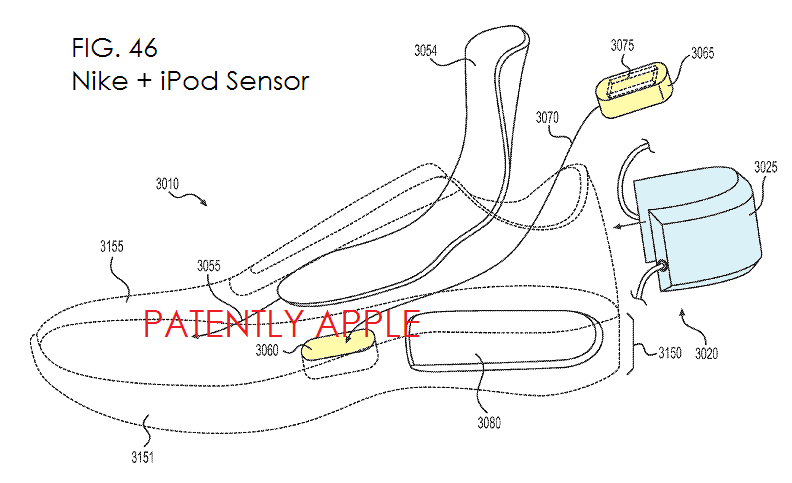 In Nike's patent FIG. 7 noted below we're able to see an embodiment of an exemplary manual release system for tensile members. In FIG. 7, the footwear #1000 can include a tensioning system #1002 with a lace #1004 and a motorized tensioning device #1006. 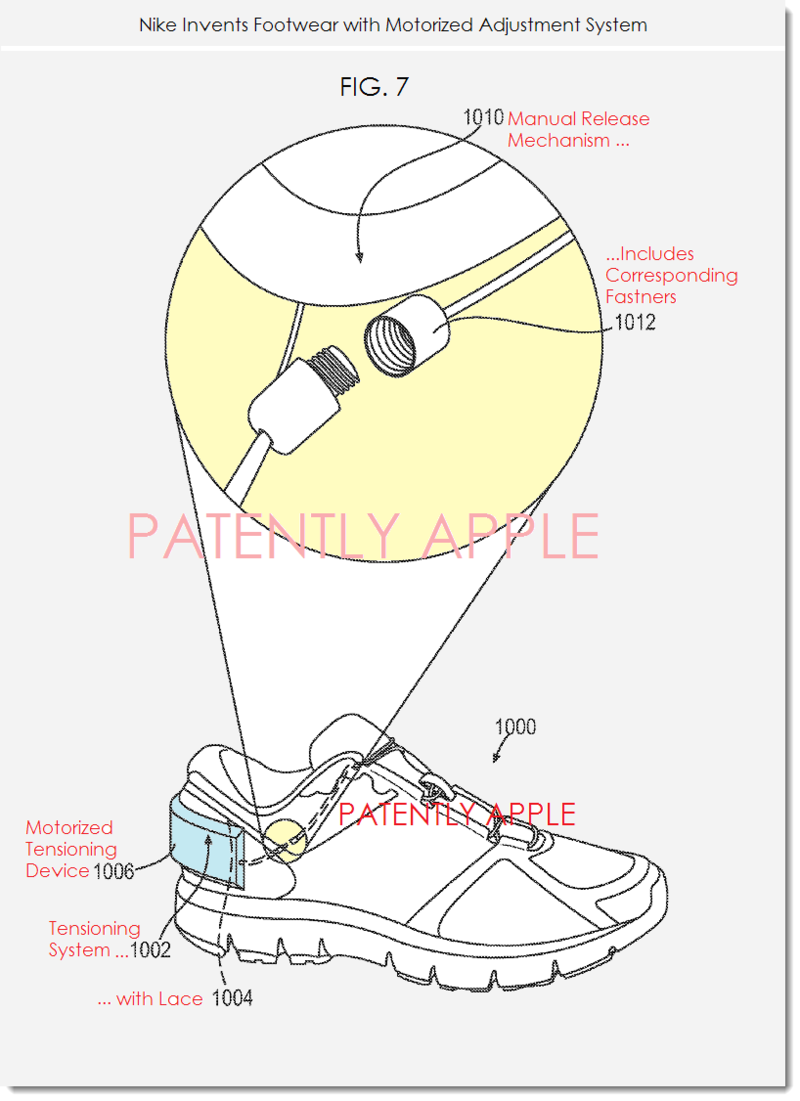 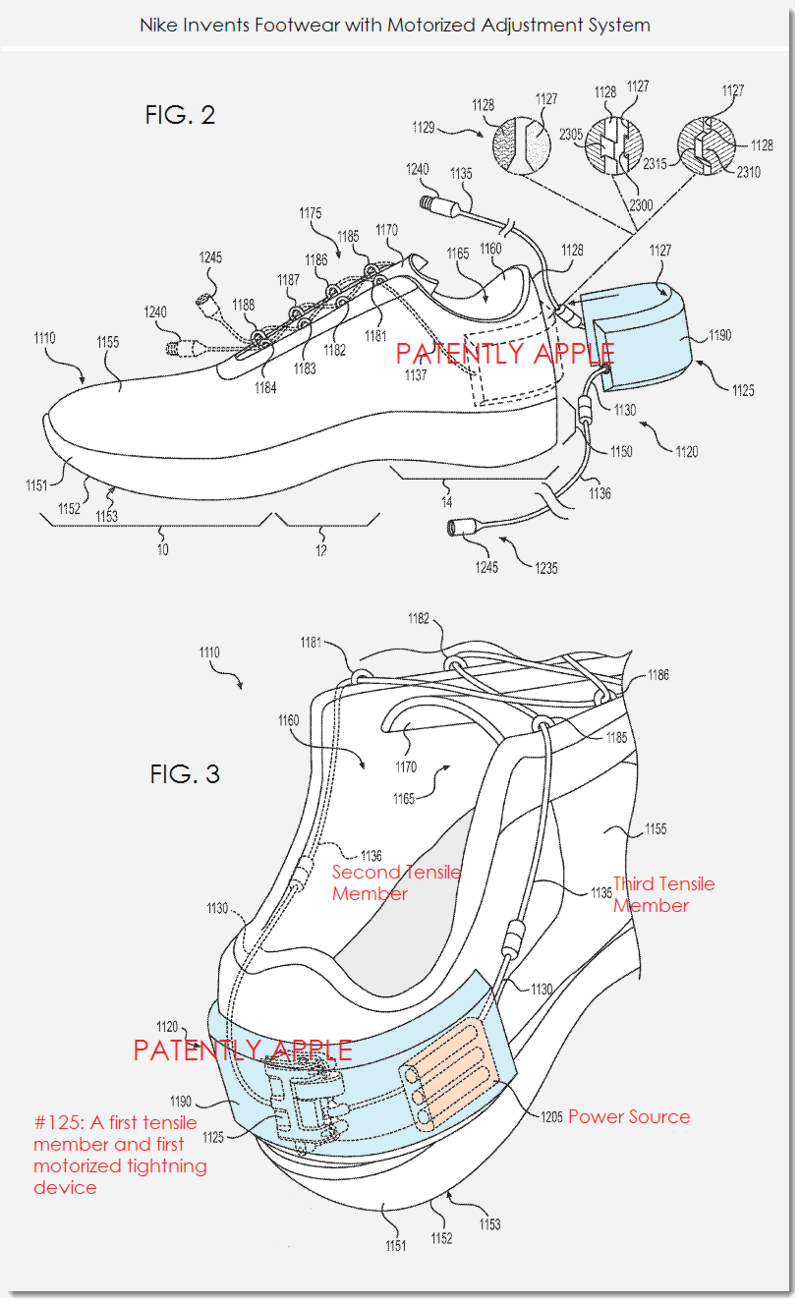 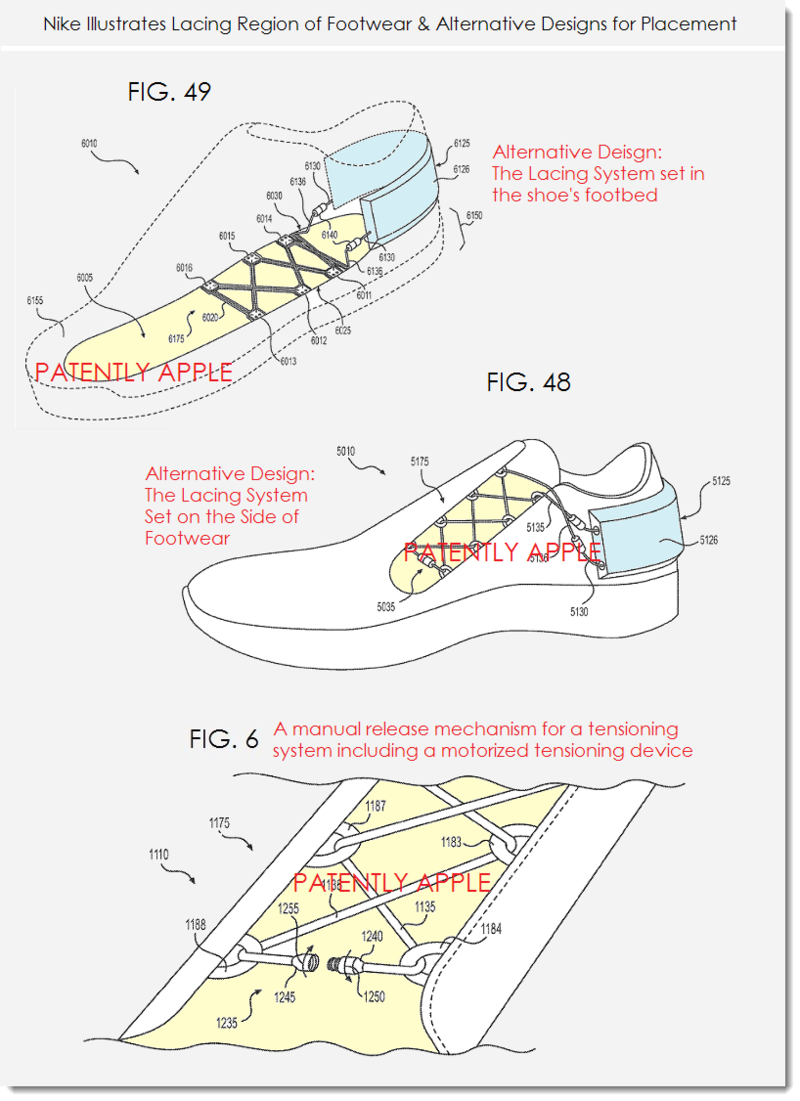 Nike's patent FIG. 6 is a schematic isometric view of an embodiment of a manual release mechanism for a tensioning system including a motorized tensioning device.

Nike's patent application that was published today by the US Patent and Trademark Office was originally filed in Q3 2013. Considering that this is a patent application, the timing of such a product to market is unknown at this time.