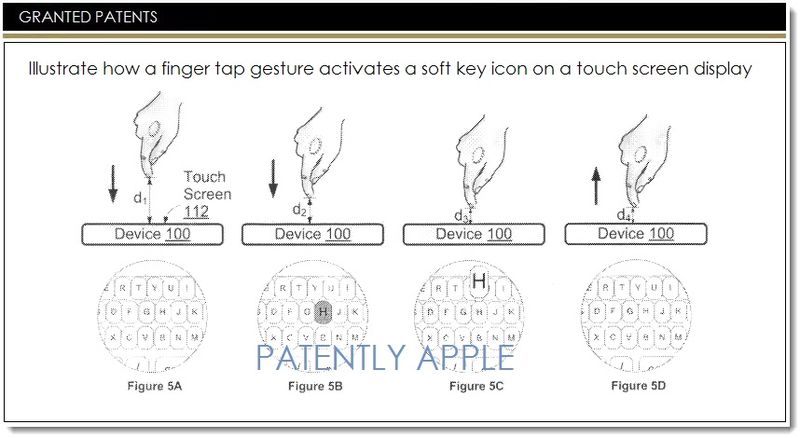 The US Patent and Trademark Office officially published a series of 36 newly granted patents for Apple Inc. today. In this particular report we cover a historically important multitouch related patent. This is one of the key patents relating to the original iPhone that allowed Apple to create a touch based device using a touch related user interface that presented touch based apps to control the device. The design introduced complex gestures including the slide gesture that was used to create the "slide to unlock" feature that everyone in the industry copied thereafter. The new gesture based UI allowed Apple to introduce an easy to use interface that dramatically departed from the heavy button riddled designs of yesteryear. This was a key point that the late Steve Jobs made during his historic 2007 iPhone keynote.

Apple Granted a Patent for a Portable Multifunction Device, Method, and GUI for Interpreting a Finger Gesture

Apple has been granted a patent today for their invention relating to portable electronic devices, and more particularly, to a portable multifunctional device that interprets a finger gesture on the touch screen display and performs operations accordingly.

Apple notes in their original 2008 invention that conventional approaches fail to recognize and/or use differences between finger tap gestures and finger swipe gestures on the touch screen display that can be used to make the device respond more efficiently to such gestures (e.g., responding faster to tap gestures and moving a slider icon by a distance that more accurately reflects the touch gesture).

Cell phones and the so-called "smartphones" of the day prior to the iPhone heavily used buttons to control most of the functionality of the device. Steve Jobs made that as one of his key sales points in his 2007 keynote introducing the revolutionary iPhone.

Today's granted patent covers the multitouch technology that enabled the iPhone to use touch and swipe gestures on its display. That capability gave the iPhone the ability to use a revolutionary touch-based user interface with touch based apps that changed smartphone design forever.

Apple credits former Senior VP of iOS Software Scott Forstall, Scott Herz an Michael Matas as the inventors of granted patent 8,665,225 which was originally filed in Q2 2008 and published today by the US Patent and Trademark Office. To review today's 29 detailed granted patent claims and other features, see Apple's patent.