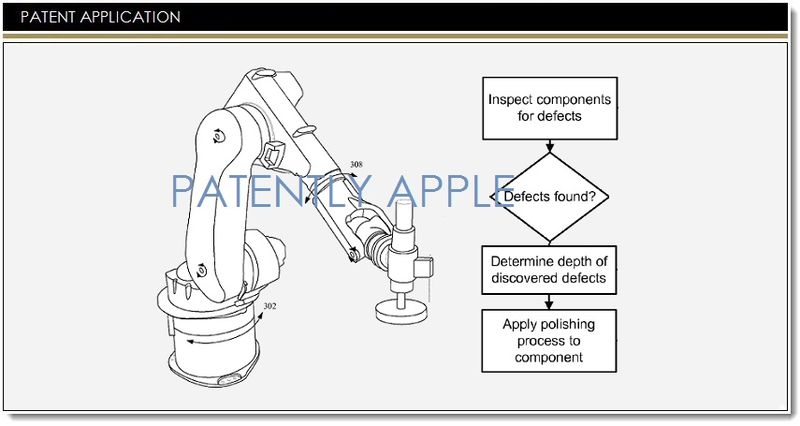 Last Thursday the US Patent & Trademark Office published a patent application from Apple that reveals that they're seeking protection for a newly advanced five axis robotic arm used in the manufacture of their new Mac Pro. Apple's Senior Vice President Operations Jeff Williams states in a video presented below that in order to make the advanced Mac Pro Tower, Apple had to pioneer entirely new processes. Of course one of them relates to Apple's new robotic arm. In the end, Apple is showing us the insane depths that they're willing to go so as to create an amazingly original desktop computer. How many companies other than Apple would go to such lengths to design a new desktop today in the midst of the mobile revolution? None. Apple just thinks different. Designing cool products is just in their DNA.

Apple states that fine surface finishing operations such as sanding and polishing remove material on the order of a few to several hundred microns depending on the intensity and cycles of force application. On three-dimensional surfaces composed of splines or curvatures, it is challenging to measure material removal and directly correlate it to accuracy and efficiency of the finishing operation. During modem machining operations, the finishing tool is generally perpendicular to the curvature of the workpiece whereas historically, measurement methods have been made perpendicular to a plane of reference. This conformal tool orientation results in parallax. Both contact and non-contact measurement methods such as lasers, 3D scanners, CMMs, OMMs, etc. have been deployed in various applications. These methods requires fixed datum as reference with respect to which material removed in the vertical direction compared before and after finishing. Given that the material removed is incredibly small, fixed datums of reference yield a significant measurement error.

Thus there exists a need for a method and an apparatus for polishing a three dimensional curved edge of an object resulting in a visually smooth and consistent reflective appearance. 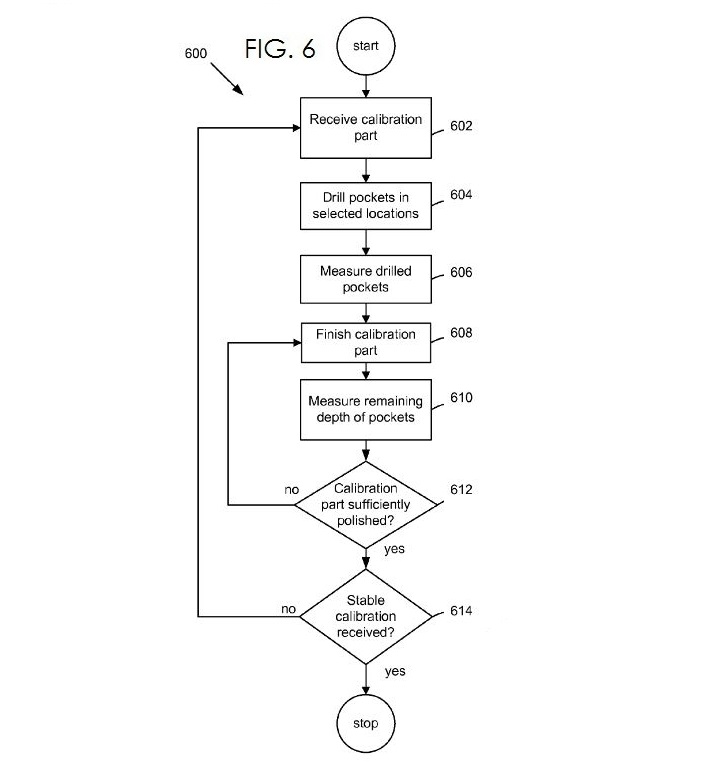 Calibrating a Finished Operation for a Spline-Shaped Housing

In another embodiment a method for calibrating a finishing operation for a spline-shaped housing is disclosed. The spline shaped housing has a varying radius of curvature. The method includes at least the following steps: (1) drilling a number of pockets into and substantially normal to a surface of a calibration housing having dimensions in accordance with the spline-shaped housing, where the pockets have a depth deeper than a pre-defined material removal depth for a production style housing; (2) measuring a pre finishing depth of the drilled plurality of pockets; (3) finishing the surface of the test housing including the pockets with a finishing tool; (4) measuring a post finishing depth of the pockets; and (5) continuing to polish the surface of the test housing until the measured post finishing depth of a pre-defined number of the pockets is determined to be in compliance with the pre-defined material removal depth.

Calibrating a Finished Operation for a Workpiece

In Apple's patent FIG. 3 noted below a five axis robotic arm is shown. A five axis robotic arm can be configured to accurately maneuver a finishing tool along a surface of a housing. This maneuvering can be referred to as a tool control path. A tool control path can be accurate to a tolerance of about 5 microns and moves the finishing device in an orientation that is substantially normal to the surface of the housing. Another robotic arm similar in design to that of FIG. 3 can be used to drill pockets in a device housing that can be drilled to an accuracy of about 5 microns.

Furthermore, when machining more housings made of more ductile material such as for example aluminum for the Mac Pro, handling of the part itself can result in minute modification of the orientation of the surface by slight deformation of the housing. Consequently the finishing calibration process should be completed without moving the part. 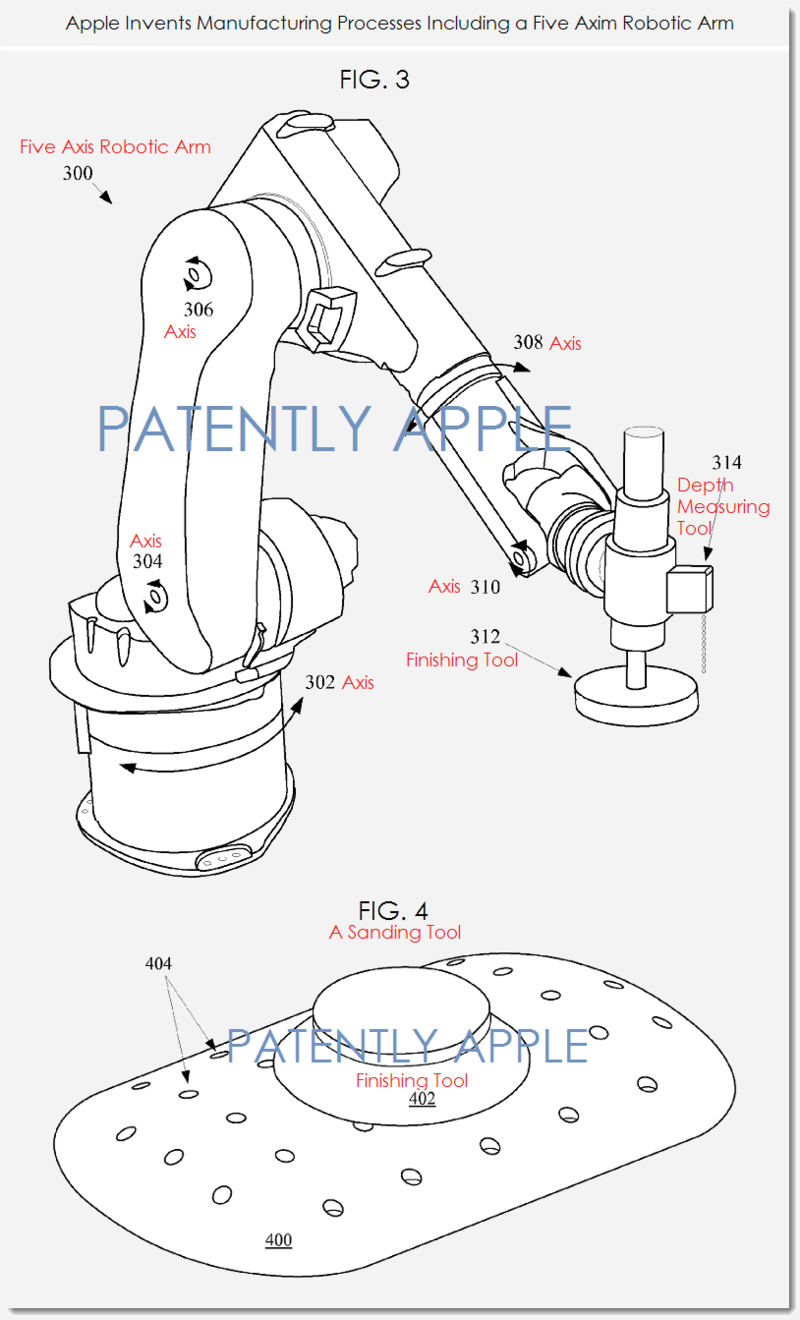 It should be noted that in some embodiments a laser can be configured both in front of and behind the finishing tool in order to allow real-time determination of material depth removal during a finishing process. 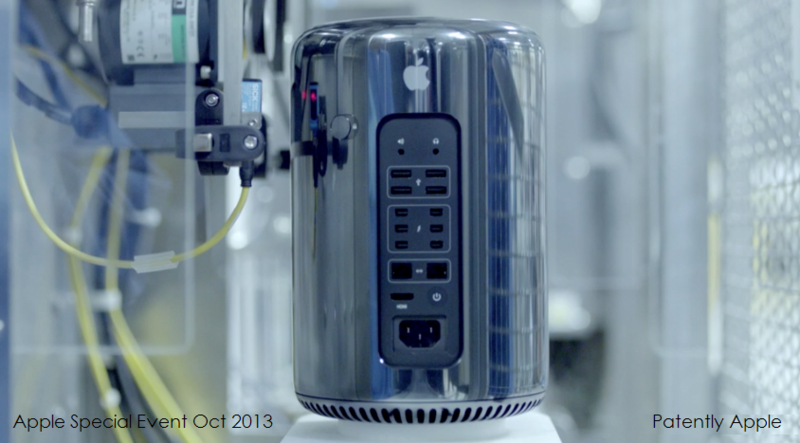 Apple's new Mac Pro is manufactured in Texas that uses next generation robotics in the finishing and assembly processes.

Apple points out in patent FIG. 4 that a spline shaped housing, noted as #400 above, is undergoing a finishing operation by finishing tool #402. In one embodiment the finishing tool can be a sanding tool. When data retrieved from this material removal determines that additional pressure or abrasive action is needed in certain areas, a force feedback component can be configured with the robotic arm to allow precise application of force to establish an accurate force profile for the finishing operation.

Apple credits Shravan Bharadwaj as the sole inventor of this patent application that was published on Thursday. Apple originally filed the application in Q3 2012.