Last July the buzz was on for LG to successfully deliver an advanced fingerprint scanner ahead of Apple's upcoming iPhone 5S. While the anticipation was high, they ultimately failed to deliver it at their special event that was held in New York in August. A month later, Samsung failed to deliver the very same feature that their rumor mill had been hyping. They later weaseled out and blamed their problems on delivering that feature squarely on their one time partner Validity. Last month the rumors began again that LG would finally be bringing their fingerprint scanner to market at the Mobile World Congress trade show starting on February 24. But LG has stumbled once again as the specs for their new smartphone were made public today and a fingerprint scanner didn't make the cut. As the pressure mounts for Android OEM's to deliver this feature, Korea's CrucialTec has just introduced a new solution that's much closer to Apple's Touch ID feature. Our report covers the basics of the CrucialTec's announcement.

It's being reported in Korea today that CrucialTec's CEO Ahn Geon-jun announced that it had succeeded in developing a crystal ceramic material with durability twice that of high-strength glass using transparent composite ceramic material.

With the strength of the material close to sapphire glass, the unit price is expected to be far lower. Another advantage of the new material is that it could be processed in one tenth the thickness compared to sapphire glass. 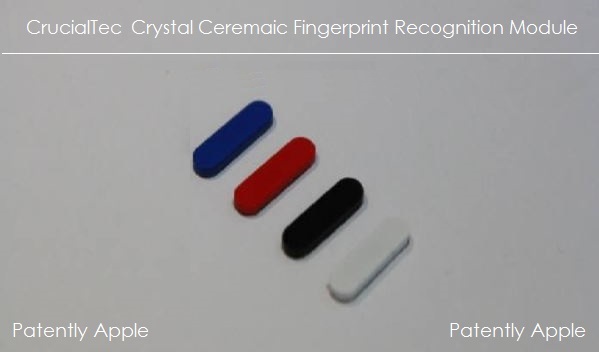 The report further noted that "The existing fingerprint recognition modules were colored using UV coating method. However, UV coating made the surface uneven, which caused the light to scatter. However, crystal ceramic produces sophisticated colors close to glass.

CrucialTec has set out a plan to convert the fingerprint recognition module line to crystal ceramic package line during the first half of the year. There is almost no burden of additional investment as the company can use the existing production facilities. Rather, the productivity will be increased all the more as the package structure became simpler.

Will CrucialTec's solution finally provide Android OEM's with some hope of challenging Apple's iPhone 5S Touch ID later this year? Only time will tell, but the tiny scanning area on these slim Android phone buttons appear to be awfully narrow for capturing a full fingerprint accurately. That's why solutions from other vendors such as Sweden's Fingerprint Cards may end up being a better fit for most Android OEMs. Then again, the two companies signed a 3 year agreement back in 2012.

Yet at the end of the day, one thing is for sure: Apple's lead in delivering a solid fingerprint scanning solution for the iPhone 5S for device authentication and e-commerce via the iTunes Store has Android's top OEMs scrambling to find something that could match it. And with each failed attempt of theirs, the pressure keeps mounting while making Apple look smarter all the while.