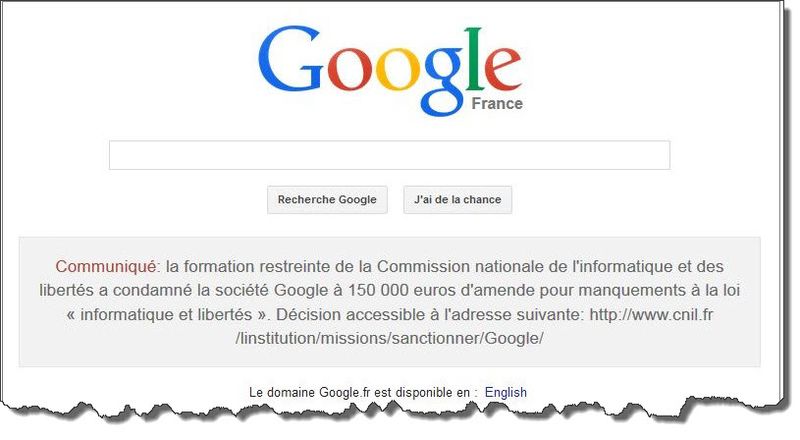 It's being reported today that Google lost a last-minute appeal to French courts on Friday, and was forced to display a huge, 13-point text block on its otherwise sterile Google.fr webpage for 48 hours. The text within the block refers to the €150,000 (US $204,400) fine that Google will have to pay for violating French data collection laws.

In the case of France, the country's Commissions Nationale de l'Informatique et des Libertés (CNIL) in January came to the conclusion that Google did "not comply with several provisions of the French Data Protection Act." As a result, the committee fined Google the aforementioned €150,000 and demanded that the company publish a communication on its website to inform users about the committee's decision.

Google on Thursday asked France's highest administrative court to suspend CNIL's order requiring Google to publicize the fine on its website, arguing that the paragraph notice – demanded by CNIL to be of a font size no smaller than 13 points and located directly beneath the search bar on Google's primary French website – would cause its reputation to be "irreparably damaged." Additionally, argued Google, the company shouldn't have to publish the announcement while it appeals CNIL's decision.

PC Mag.com noted that "As you might expect, France's Conseil d'État disagreed." The violation of collecting data on consumers illegally is an ongoing matter with Google around the globe.

Last week, Google agreed to a settlement with European competition regulators ending half a decade of wrangles with antitrust authorities across the globe.

European authorities and judges appear to rather enjoy forcing US technology companies like Apple and Google to publically repent for their sins. I mean, it was the French who invented the Guillotine for public executions in the first place, right? I guess old habits die hard.