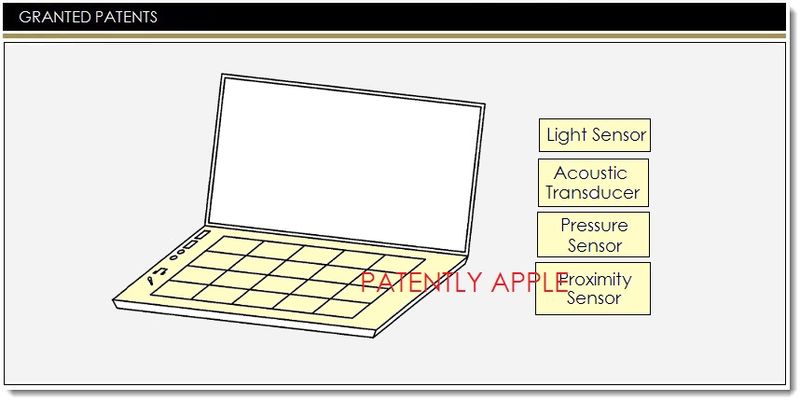 The US Patent and Trademark Office officially published a series of 38 newly granted patents for Apple Inc. today. In this particular report we cover a single yet powerful invention. While the invention primarily relates to a possible future MacBook, it also relates to a future tablet, iPhone, television or home appliance. The invention focuses in on the device casing being an I/O interface that could illuminate physical buttons. In the case of the MacBook, there would be no physical keyboard, just an illuminated image of a keyboard which could also morph into a numeric pad and technically into any configuration supporting an application. So with GarageBand, for instance, the keyboard area would be able to morph into a piano keyboard. With a gaming application, the face of the MacBook would be able to reconfigure itself to represent game controls of one sort or another. This is one of Apple's more interesting inventions that could one day support a futuristic hybrid device that would be able to morph into many devices including a notebook, portable gaming machine, television and beyond. 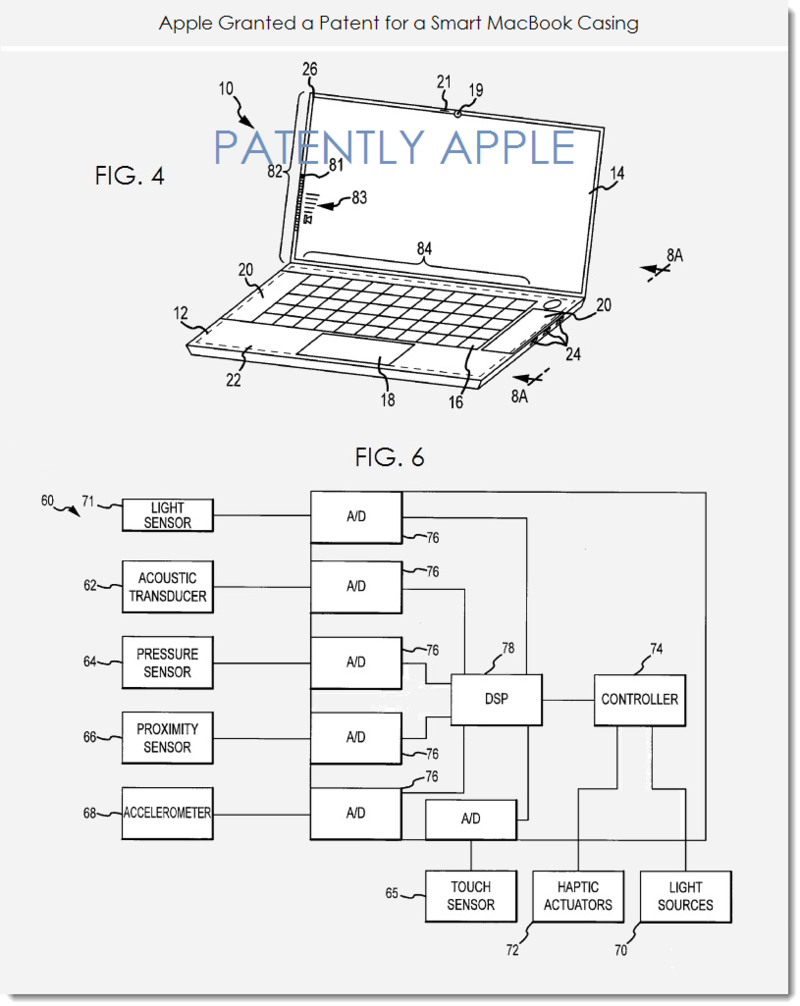 The I/O Interface for Computers, Devices and Home Appliances

According to Apple's granted patent, the housing user interface or I/O interface may be implemented in a variety of electronic devices including, but not limited to, portable computing devices, cell phones, televisions, personal computers, smart phones, personal digital assistants, media players, appliances such as refrigerators, microwave ovens, etc. and any other suitable electronic device. As such, although the description included herein may include some specific embodiments and may be related to particular functions, it should be understood that the housing I/O interface may be implemented in a wide variety of devices and may perform a variety of functions beyond the embodiments specifically described in this report. 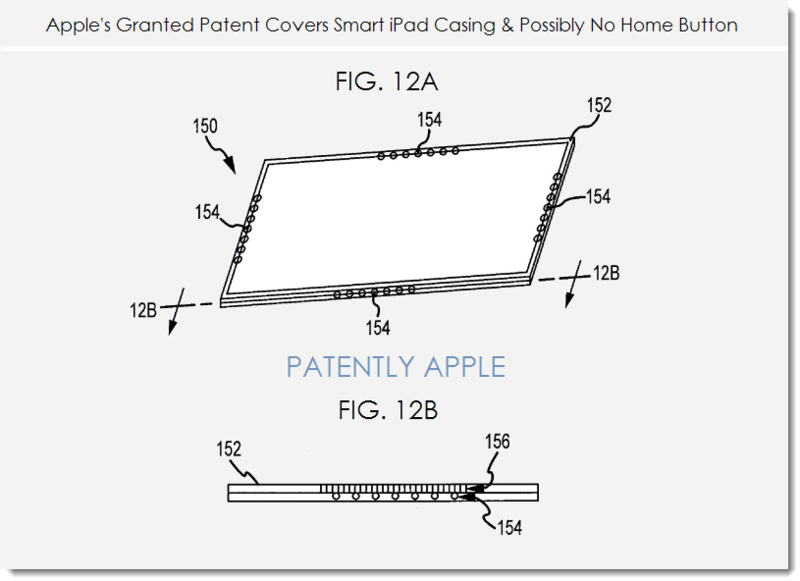 Apple's patent FIG. 12A illustrates a tablet computing device (#150). In one example, the volume outputted by the device's speakers of the device and/or the brightness of the display may be adjusted by touching or applying pressure to the housing (#152).

Instead of having a home button, the tablet may simply go to sleep with one tap on the housing and turn off with a double tap. Considering that Apple's patent is primarily illustrating a smart MacBook casing, it's possible that the inclusion of a smart tablet casing that differs from the iPad would be in context with a hybrid notebook tablet rather than an independent standalone iPad.

As shown in Apple's patent FIG. 8A below, when there's no object detected as being near the MacBook Ports (#24), there is no output/feedback provided to a user and the surface of the housing appears to be a non-functional wall, as there are no breaks in the housing surface for input or output devices.

In response to sensing the user input, i.e., an object approaching the ports, the proximity sensors (#66) may generate a signal. The strength of the signal generated by the sensor may be used to determine the distance of an object from the ports. Upon sensing an object near the ports, the processor may generate an output signal to light sources (not shown) so that icons (#97) may be illuminated or may otherwise appear on a top surface of the housing to indicate the location and types of ports that are located on the side of the housing, as shown in FIG. 8B.

Turning to FIGS. 9A and 9B, an alternative embodiment is illustrated wherein a USB connector (#112) may be configured to identify itself to the system as it approaches a port or a bank of ports. 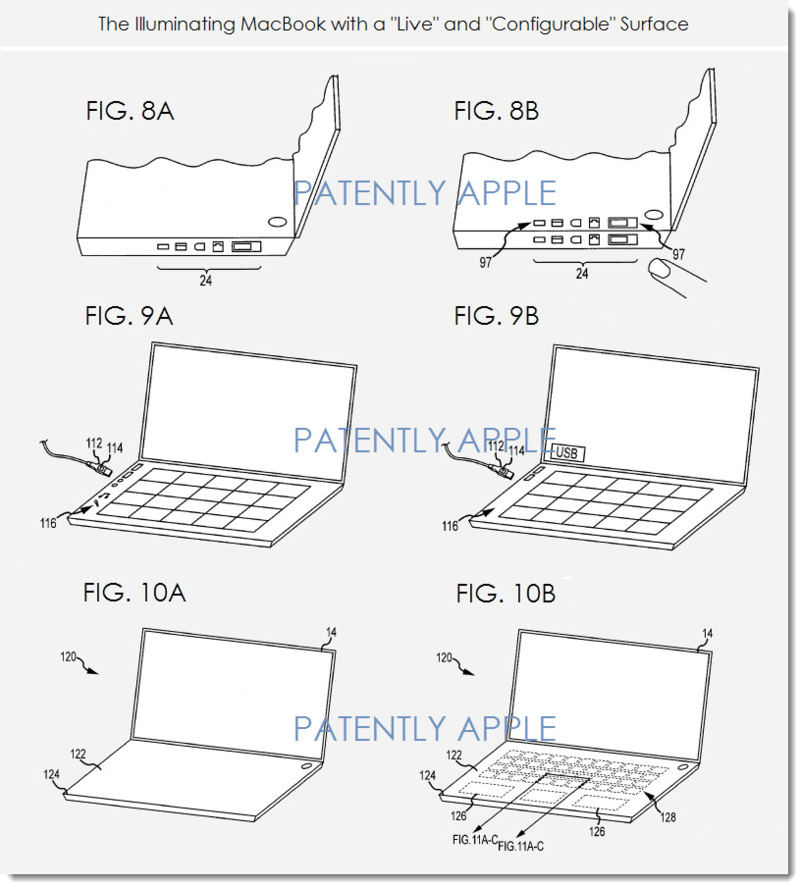 In yet another alternative embodiment, Apple states that a user may configure the top surface of the MacBook (#122) to be a custom configuration. The MacBook system may be configured to operate in an operating mode and a configuration mode.

Once in the configuration mode, a user may define portions of the MacBook's surface to provide specified input, such as a keyboard, numeric pad. Technically, the interface could also accommodate a music keyboard or gaming controls and so forth. For example, the configuration mode may provide an application in which a user could manipulate how touching or applying pressure to certain areas of the surface are interpreted.

Apple credits Aleksandar Pance, Nicholas King, Duncan Kerr and Brett Bilbrey as the inventors of granted patent 8,654,524 which was originally filed in Q3 2009 and published today by the US Patent and Trademark Office. Apple's patent application first came to light in February 2011.