Melissa Pettignano has filed a copyright infringement lawsuit against Apple along with others including Amazon, Google, Barnes and Noble, Kobo and Sony. Ms. Pettignano has licensed the rights to publish her book in print version only, but explicitly withheld the rights to publish her book, Suzanne Lantana, in electronic book ("e-book") format. Yet somehow each defendant's online store is offering the book.

Facts of the Case

The facts of this case, as outlined in their formal complaint before the courts, state that "Ms. Pettignano is a talented and recognized artist who is both an author and musician. She is a songwriter and has published works of both fiction and non-fiction.

Ms. Pettignano's talents have been recognized by many sources in the industry. For example, Ms. Pettignano has appeared several times in television, radio, and magazine interviews, such as CBS Radio, The Barry Z TV/Radio Show, The New Yorker TV Show with James Chladek, The Jo Shenman TV Show, and RAI TV Italian. Ms. Pettignano was interviewed for a show entitled: Bill O' Reily's: What's Happening Now on Fox News, which is awaiting a scheduled air date.

Ms. Pettignano has recently been recognized as one of the "50 Great Writers You Should Be Reading" by The Authors Show, and was featured in Entrepreneur Magazine discussing the impact of the 9-11 terrorist attacks on her work as an entrepreneur .

Ms. Pettignano has filed multiple applications for copyright registration with the United States Copyright Office directed to her books.

Ms. Pettignano has never authorized any entity to publish an e-book derivative of her work.

Each of the defendants in this action maintain websites or online stores that are accessible by and available to users throughout the United States including in this District.

Upon information and belief, APPLE, INC., is engaged in the business of providing retail Internet sales of various products, including books in both paper and electronic ("iBook") format, to customers throughout the world including within this judicial district." 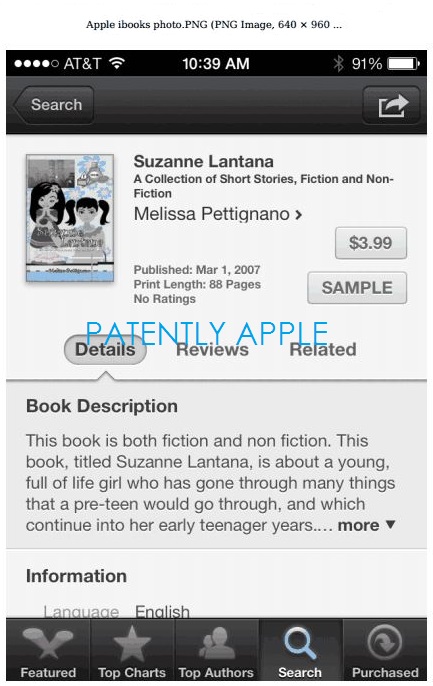 The court document, as filed by Whitaker Law Group, states that "The Defendants have willfully committed copyright infringement directly, by inducement, or by way of contributory liability, by knowingly aiding, causing, or committing, the unauthorized practice or execution of one or more exclusive rights owned by Ms. Pettignano as set forth in 17 U.S.C. § 106, said exclusive rights having been perfected by U.S. Copyright Service Requests as identified in Attached Exhibit A [not shown].

The patent infringement case presented in today's report was filed in the Washington Western District Court, Seattle Office. The Presiding Judge in this case is noted as being Judge Marsha J. Pechman.

In Other Legal News Today

Apple Inc. has agreed pay at least $32.5 million to provide full refunds to consumers to settle a Federal Trade Commission complaint that the company billed customers for millions of dollars for charges made by children in kids- focused mobile apps, without their parents' consent.

Under the terms of the settlement, Apple also will change its billing practices to ensure it has obtained express, informed consent from consumers before charging them for items sold in mobile apps, the FTC said Wednesday.