On Friday we reported that Apple's new iPhones hit Samsung's Q4 Badly. On January 07, Businessweek estimated that Samsung had shipped 13 million units of their Galaxy S4 for Q4. Yet when the real numbers came in days later, Bloomberg reported that it was actually much, much worse at a measly 9 million units, down from selling 17 million in Q3. Today, Apple announced a record-breaking 51 million iPhones were sold in the holiday Quarter which clearly demonstrates that the new iPhone 5S was a smash hit this holiday season with consumers over rival products from Samsung and others. Report Updated with Conference Call Highlights 5:15 PST 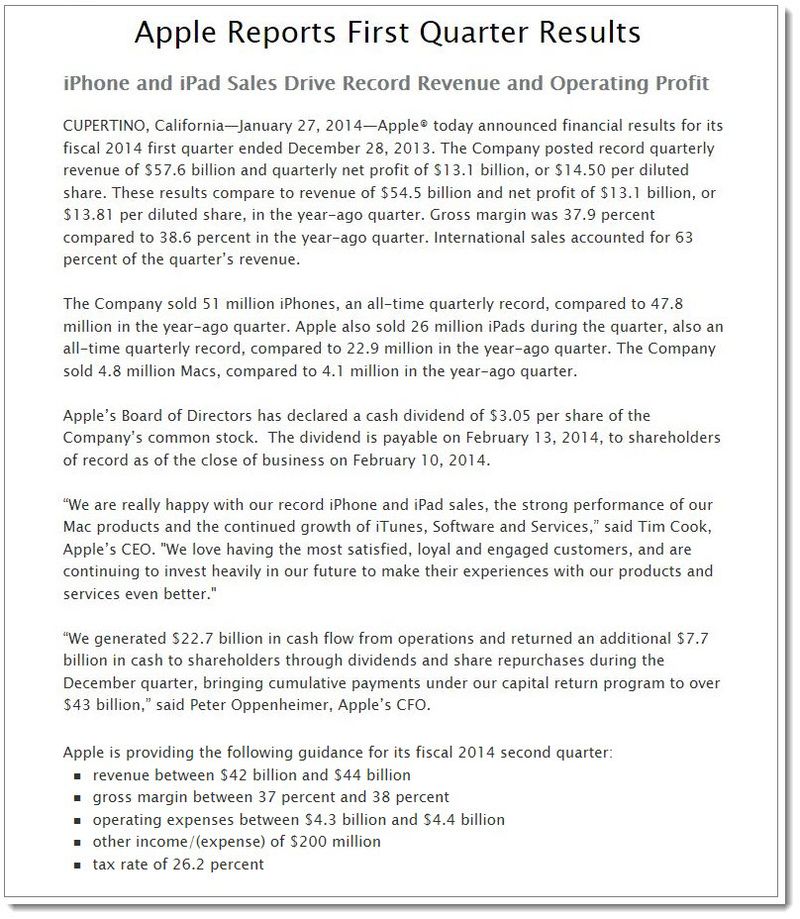 We'll follow up later should there be any interesting comments made during the conference call. After hours, NASDAQ has Apple down, fluctuating between 7.5 to 8.0% to around $507/share.

·   On iPod Sales: Apple's iPod sales fell 52% to 6 million units from 12.6 million units a year prior. That’s a rather rough drop. Cook hinted that iPod sales are likely to fall another 50% in the current quarter.

·   On iPhone Loyalty Rate: Oppenheim noted that Kantar Research found that the iPhone enjoys a 90% "loyalty rate."  That’s the highest in the industry. Oppenheimer also noted that the iPhone is becoming popular with large organizations, such as Accenture, Cisco and American Airlines.

·    On Mac sales: The Mac grew in each operating segment, particularly in Europe and China. Macs have gained global market share for the past 30 of the past 31 quarters.

·    On Growth in China: iPhone sales doubled year-over-year in mainland China. CEO Tim Cook noted that iPhone activations so far in the past week since the China Mobile launch has been highest ever in the country. He further noted that the iPhone only launched in 16 cities that that they should see the iPhone in more than 300 cities by the end of the year as they upgrade to 4G (which should translate to phenomenal iPhone growth in 2014).

·   On the topic of mobile payments: Cook noted that "We’re seeing people loving to be able to buy content, whether it’s music or movies or books from the iPhones using Touch ID. It’s incredibly simple and easy and elegant." He says the company is intrigued with mobile payments in general, and it was part of what was behind Touch ID. Cook didn't elaborate on where Apple is going with mobile payment systems.

·   On the topic of iPhone Growth: Sales in Latin America grew at 76%; the Middle East and Africa grew 65%; Central And Eastern Europe grew by 115%;  China grew 20% excluding China Mobile data; and in Japan, NTT Docomo helped push sales up 40%.

·    iPhone Sales in North American contracted:  Cook noted "We lost some sort of units for part of the quarter in North America. Cook in part blamed new upgrade plans at carriers. He noted that customers on a contract were restricted from upgrading earlier than 24 months. Part of what’s happening in North America is a “short-term effect” because of these upgrade policies.

·    On the Enterprise Front: The iPhone is being used in 97% of Fortune 500, and the iPad is used in 98% of Fortune 500. He also says vast majority of tablet activations are on iPads, and 95% of total app activations were on iOS. "I think that is an incredible measure of ultimately how sticky the products are because you get so much productivity out of an iPad and iPhone,” he said. He also thinks that "the road in enterprise is a longer one."

·   On Apple's Innovation Cycle: Cook noted that "It’s never been stronger. I’m very confident with the work that’s going on and I think our customers are going to love what we’re going to do."