It would therefore be desirable to provide improved computers such as computers with improved housing and display features.

Apple's patent relates to electronic devices such as computers, and more particularly, to displays and display-based features for computers.

The first noteworthy aspect of Apple's granted patent is that the Display structures and the rear plate may be mounted to opposing sides of a shelf portion of the peripheral housing member.

The rear plate may be formed from electrochromic glass. Photovoltaic cells may be located under the rear plate and may produce power when activated by an external light source.

Electrochromic glass is also known in the industry as "Smart Glass." Smart glass, or switchable glass, also called smart windows or switchable windows in its application to windows or skylights, refers to glass or glazing that changes light transmission properties when voltage, light or heat is applied.

Smart glass controls the amount of light (and thereby heat) transmission. When activated, the glass changes from transparent to translucent, blocking some or all wavelengths of light. 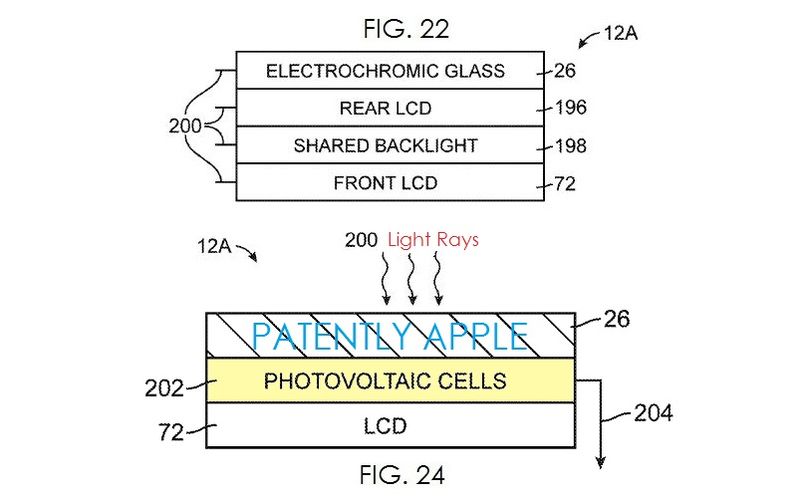 Apple has filed for a great number of patents relating to the use of photovoltaic cells for MacBooks, iPhone and iPods. You could review these patents under our "green technology archive" or under a search for solar here.

The second noteworthy aspect of Apple's granted patent is that Touch sensors may be located under the rear plate and may gather touch input. A control unit may be used to process touch commands on the rear plate to perform functions such as unlocking a magnetic latch that holds the upper housing to the lower housing.

Apple has filed for patents that cover backside controls dating back to date back to 2006. We presented images from that patent filing in our 2010 report titled "Apple: The Tablet Prophecies." Another patent on this topic was covered back in 2012 in our report titled "Apple Reveals Future iPad with Backside Controls for Gaming. 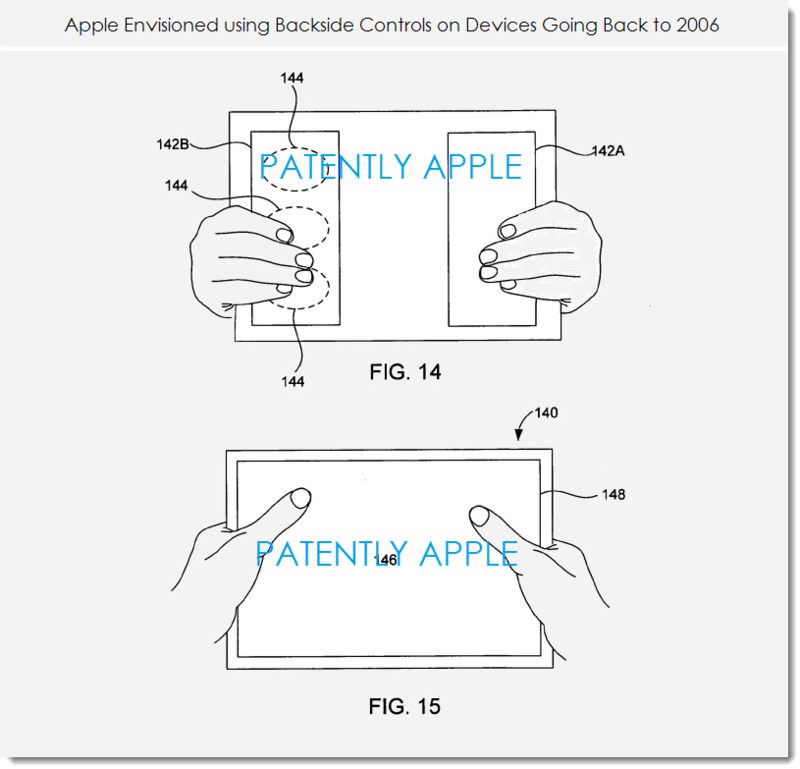 In today's patent filing, FIG. 18 noted below is a cross-sectional side view of an illustrative display module having an integrated touch sensor formed under a rear plate structure in accordance with an embodiment of the present invention.

The third noteworthy aspect of Apple's granted patent is the fact is that the filing also emphasizes an antenna in the display and wireless circuitry in devices. Associated antennas may be used in transmitting and receiving radio-frequency antenna signals such as cellular telephone signals, wireless local area network signals, etc.

Apple has already been granted a patent about a cellular MacBook and we've created an extensive archive on the subject.

A future MacBook with cellular connectivity is likely to be a product that is going to get more traction over time, especially as 4G and faster networks dominate the market. This was discussed in a new study by ABI Research today.

The ABI reports states that "Looking ahead, ABI Research expects LTE mobile broadband as a standard feature to become a differentiator for the mobile network operator channel, enhancing its selling opportunity beyond smartphones. As LTE reaches critical mass for network coverage, markets will be able to abandon 3G mode compatibility and carriers will readily shift toward LTE-only modems in data-centric computing applications. By 2015, North America will relinquish the regional lead for ultra-portables as Asia-Pacific pushes forward due to market saturation in the early adopter countries."

Ultra-portables as noted in ABI's report refers to convertible and detachable 2-in-1 configured Notebook PC's as well as Apple's MacBook Air. As Mobile China and others shift to 4G over the next few years, the explosive market for smartphones is likely to spill over to 4G ready notebooks.