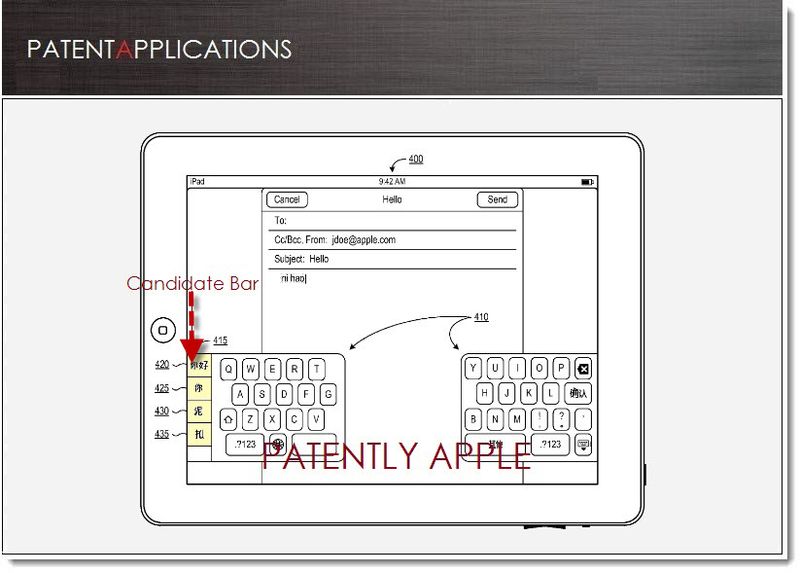 On November 14, 2013 the US Patent & Trademark Office published a patent application from Apple that reveals everything you want to know about the iPad's split keyboard. The invention places a lot of emphasis on a "candidate bar" next to the left side of the virtual keyboard as noted above. As a character input is received via the keyboard, the iPad may update the candidate bar to include various candidate characters that correspond to the received character input. The candidate characters may be individual letters or they may be words, phrases, numbers, or the like.

Apple begins covering the candidate bar in patent figure FIG. 4 noted in our cover graphic. In the noted example we see an illustrated user interface that includes character input and one or more candidates. In particular, a user may have entered character input 405 by typing on split keyboard and the character input may correspond to a linguistic expression (e.g., a word, a phrase, a string of characters, etc.) that has two or more interpretations. For example, the character input may be a linguistic expression entered in a first alphabet that has two or more corresponding spellings in a second alphabet different from the first alphabet.

Accordingly, the user interface may include a vertical candidate bar 415 which may display one or more character candidates (e.g., candidates 420, 425, 430, and 435) determined based upon the character input 405.

Apple credits Morgan Winer as the sole inventor of patent application 20130300664 which was originally filed in Q2 2012. To review the full details of this invention, see Apple's invention.

Side Note: I don't know if it's an anomaly, a temporary hiccup or just a lack of inspiration – but the lack of new invention ideas coming out of Apple are now at a snail's pace compared to those that surfaced during the 2006-2011 time frame. Time will tell if this is just a blip in time or a trend for "new Apple" without the late Steve Jobs.