Apple rested their defense last Tuesday in their final attempt to stave off a patent lawsuit with far-reaching implications for all smartphone makers. Filed by California inventor Richard Ditzik in 2011, the Los Angeles-based federal lawsuit asserts that Apple's iPhone 4 infringes on Ditzik's patent 7,103,380 titled "Wireless handset communications system." The patent, filed in 1997, claims in part a handset device that handles email and communicates with multiple networks at varying power levels. 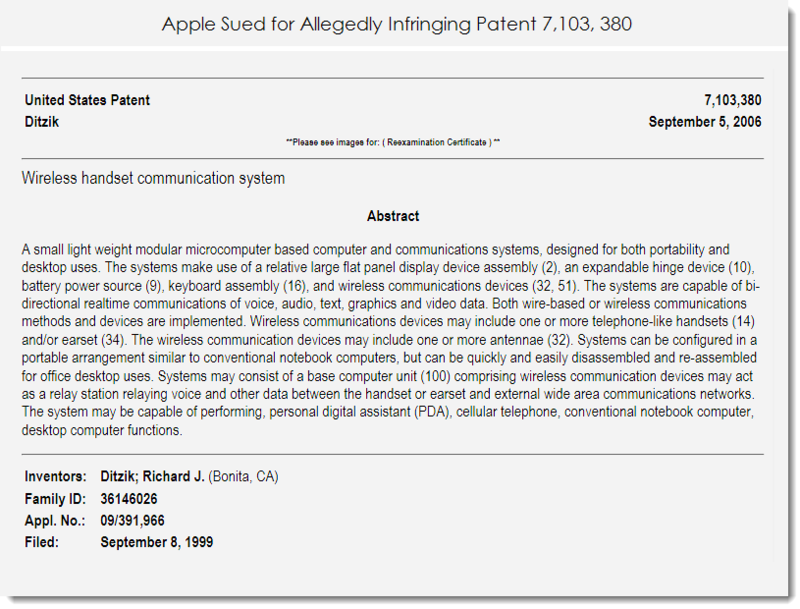 Experts Argue over the iPhone 4

Apple presented an expert witness, Associate Professor Jeffrey Rodriguez of the University of Arizona, who performed an invalidity analysis of the patent and concluded the US Patent and Trademark Office (USPTO) should not have granted Mr. Ditzik the patent in the first place. Based on the report's conclusions, Apple requested that the USPTO re-examine Ditzik's patent in 2011.

Dean Niro, attorney for the plaintiff, countered with a cross-examination that pointed out Rodriguez has no patents himself, and no experience with the rules for determining patentability which guide professional patent examiners. The USPTO eventually allowed Mr. Ditzik's patent after the re-examination, but with some changes made to his original claims.

Apple: This Patent is Bogus

Mark Scarsi, Apple's attorney, displayed several magazine articles that described key features Mr. Ditzik claimed to have invented, but already existed in products at the time the patent was granted. Two early versions of cell phones with mobile communications technology were repeatedly mentioned: the Nokia 9000 Communicator and IBM's Simon. Ray Niro, the plaintiff's lead attorney (and father of co-counsel Dean Niro), provided evidence that Mr. Ditzik told the USPTO about those articles during re-examination and the patent was granted anyway. Apple disputed the evidence.

Ray Niro laid out the plaintiff's case in his closing arguments on Wednesday: Mr. Ditzik applied for his patent in 1997 and it was granted in 2002. A total of eleven examiners reviewed his application and allowed it to proceed. Apple themselves asked for a re-examination of the patent, and the patent was re-issued to Ditzik after the review. According to Mr. Niro, Apple chose to not pay a licensing fee to Ditzik, hence the lawsuit.

Mr. Scarsi painted a different picture, claiming that Mr. Ditzik made wholesale changes to his patent application after learning of new products in the marketplace. Apple further alleges that Mr. Ditzik failed to disclose important elements of his invention in his written description (also known as the patent specification) and the newly-changed claims aren't supported by what he originally described. According to US patent law, an applicant is permitted to amend a patent's claims after the initial filing, but not the written description of how the invention works. Apple raised this point during cross-examination of expert witness for the plaintiff Thomas Blackburn.

Hello, Nice to Sue You

Apple also said that Mr. Ditzik didn't make any requests for licensing but went straight to filing an infringement suit against the company. Apple pointed out that Ditzik's company, NetAirus Technologies LLC, had already approached every other major smartphone manufacturer about his patent, but none had chosen to buy a license.

In a dramatic move at the end of his closing, Mr. Niro picked up Mr. Ditzik's official patent certificate from his counsel's desk and handed it to the inventor, while asking the jury to do likewise by returning a verdict for the plaintiff.

Because damages can be calculated based on the scale of infringement, Niro presented evidence intended to show that millions of customers were induced to infringe whenever they used their iPhone 4 to send an email. Apple succeeded in getting Judge John Kronstadt to throw out evidence that would widen the potential scale of infringement, in effect capping damages that could be claimed.

The case is considered important because of the potential effect on other smartphone manufacturers. If the jury finds for the plaintiff, then companies like Samsung and HTC may decide to license Ditzik's invention instead of fighting and losing in court. If the jury declares Apple the winner, the movement to curtail "patent troll" lawsuits, as some have termed this case, will likely grow stronger.

According to a new report from U-T San Diego, Apple didn't infringe the patent of a 70-year-old electrical engineer who claims he came up with the idea for the smartphone, a federal jury in Los Angeles said.

The jury rejected the claim by NetAirus Technologies, the company owned by inventor Richard L. Ditzik, that Apple’s iPhone infringes its patent for a handheld device that combines computer and wireless-communication functions over both a Wi-Fi and cellular telephone network.

The trial was limited to damages NetAirus could seek for infringement by Apple’s iPhone 4 since October of last year, when the patent was recertified with substantial changes in the language of the claims. NetAirus has filed a separate lawsuit for alleged patent infringement by the iPad and iPhone models that Apple started selling since the suit was filed in 2010.

Jason Frankovitz is a software patent expert who works on IP
licensing, acquisitions, and infringement projects. Contact him at
jason@theipman.net.