International Data Corporation's latest U.S. and Worldwide PC shipment stats were just released. Worldwide PC shipments totaled 81.6 million units in the third quarter of 2013. In year-on-year terms, the market contracted -7.6%, ahead of a projected decline of -9.5% for the current quarter. Although Lenovo inched out over HP, HP held up well in this tough market with a 0.4% growth which is in stark contrast to both Acer and ASUS who dropped more than 34% for the quarter. In the US, the only loser in this quarter was Apple.


The bottom line is that in business volume, there was a slight uptick in the quarter in worldwide shipments. The top three vendors (Lenovo, HP, and Dell), which all have an important presence in the enterprise and public sectors, each saw modest positive year-on-year growth during the quarter.

Conversely, consumer sentiment remained lukewarm at best, as evidenced by the continued struggles of Acer and ASUS. But the big loser in this quarter was definitely Apple who sharply declined by 11.2%. They were the only PC vendor to be in the minus column for the quarter. 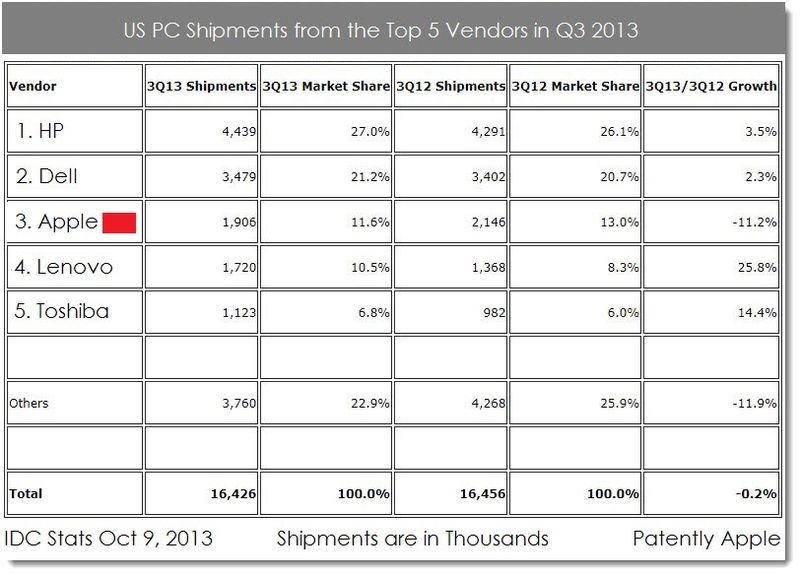 IDC failed to explain Apple's decline or the other four vendor's successes. Some of the possible positive factors for the successful four PC vendors could include more aggressive back to school sales; the popularity of 2-in-1 Notebook Tablet hybrid designs or more all-in-one Desktops coming to market to Challenge Apple's iMac.

Apple's PC stats could improve next quarter considering that the iMac update only came late in the quarter, specifically September 24, 2013. We'll know next quarter if Apple's PC sales were down due to market conditions or simply user's waiting for the updated iMacs. Time will tell.