Aylus Networks is a privately held corporation based in Westford, Massachusetts. Employing a team of world class scientists, Aylus has pioneered the development of media switch and processing technology, and infrastructure that enables mobile video communication across networks and devices. Aylus' homegrown technology – and the patent-in-suit – is the result of Aylus' own research and development. Aylus' efforts have resulted in numerous inventions protected by United States patents, including the patent at issue in this case. 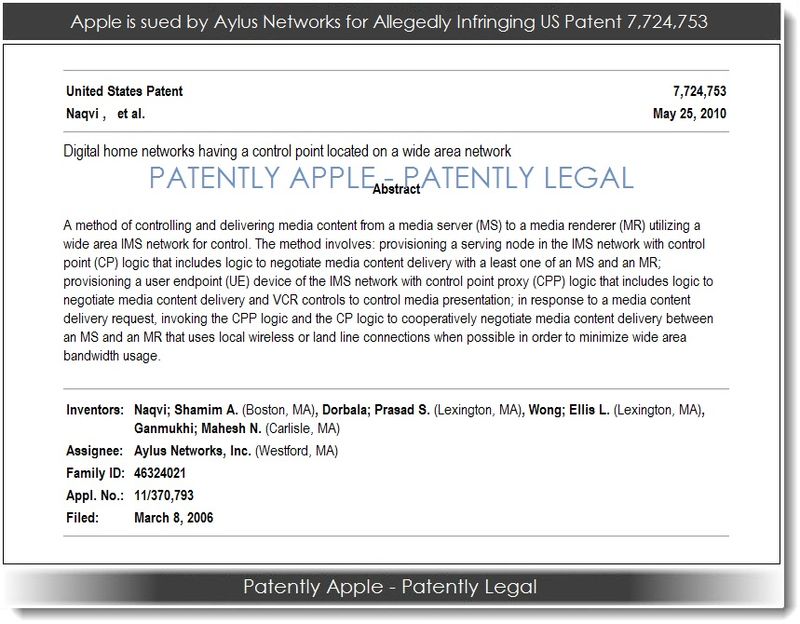 Aylus' formal complaint states that "the AppleTV product, when connected to a display device, such as a television, enables the rendering of audiovisual media that comes from a media server on a wide area network, such as the internet, on the television or other display device. This includes the display of audiovisual media from Internet services, including, but not limited to, Apple's iTunes Store. According to Apple, "Apple TV with 1080p HD gives you access to the best content — blockbuster movies, TV shows, sports, your music and photos, and more — right on your widescreen TV. You can even play content from your iOS devices on your TV using AirPlay."

Apple's Apple TV with AirPlay allows Apple's listed products to direct audiovisual media from servers located on the Internet, including, but not limited to, the iTunes Store, to an AppleTV to be rendered on a display device.

Aylus quotes from the Apple website: "Apple TV gives you anytime access to endless entertainment, thousands of HD movies and TV shows from iTunes, many in stunning 1080p, play through Apple TV on your HDTV, and music and photos stream from your computer. You just click and watch. With AirPlay, it's simple to play content from your iPad, iPhone, or iPod touch on your TV. And finding whatever you're in the mood for — from any AppleTV content provider — is quick and easy thanks to a beautiful and consistent interface."

Aylus is charging Apple with patent infringement that was willful, a code phrase that is asking the court to triple the damages should Apple be found guilty in this case. In the "Prayer for Relief, the 7,724,753 patent is noted differently as being RE44,412.

The patent infringement case presented in today's report was filed in the California Northern District Court, San Francisco Office. The Presiding Judge in this case is noted as being Judge Joseph.

First of all, let's not forget that the AirTunes/AirPlay protocol and the AirPort Express have been around since June 2004. I highly doubt that Apple forgot to apply for patents for these inventions. The underlying control and delivery mechanisms are similar.

Is the company also suing all the other devices from other manufactures that do essentially the same thing? It seems to me that even Samsung's new "Smart TV" would qualify.

I would love to see how their invention works in real life between devices and not just in their world of make believe.