The doubting is over. The iPad mini with a Retina Display is a reality and will be available before the holiday season really kicks in. The rumor that got the news right was actually the earliest rumor of them all. In February Patently Apple reported that a rumor stated that the iPad mini 2 would deliver a new level of Retina to 2048 x 1536 ppi resolution. That's exactly what Apple announced would be coming to market earlier today during their special event.


The other good news is that the older model iPad mini without a Retina display will start selling for $299 which is what some of Apple's Android competitors feared would happen – giving them advantages in cost controls.

But not all iPad mini rumors were right. In fact the Chinese blog "DoNews" should be viewed as a site not to be trusted going forward. They went out of their way to present a fake photo of an iPad mini in Gold with Touch ID capabilities that we, CNET, 9to5Mac, GIGAOM, Electronista and many others fell for including AppleInsider (using another source). While I can appreciate that some rumors will fly and others not, sources using "photoshopped" photos for the sake of clicks and momentary fame, go directly to the dog house, no questions asked.

The Brilliance of the iPad mini

Apple's iPad mini with Retina is bound to be a hit this holiday season. If you're asking the question "how do 3 million pixels fit into a 7.9 inches? Apple's answer is simple: Brilliantly.

To bring the Retina display to iPad mini, Apple had to find a way to pack every one of the 3.1 million pixels from the 9.7-inch iPad into a 7.9-inch display. Every pixel in a display has multiple signals telling it when to light up. And with a 2048 x 1536 resolution display, more pixels and more signals are placed closer together on the same plane, so signals can get crossed and image quality can suffer. To make sure everything on iPad mini looks crystal clear, Apple engineers elevated the pixels onto a different plane — separating them from the signals. In the end, the pixel density jumped to 326 pixels per inch — so dense the human eye can't distinguish individual pixels — making everything look incredibly detailed, vibrant, and razor sharp.

Apple's introduction of the iPad mini (second generation) with Retina was truly one of the brightest spots to be found in Apple's event today. 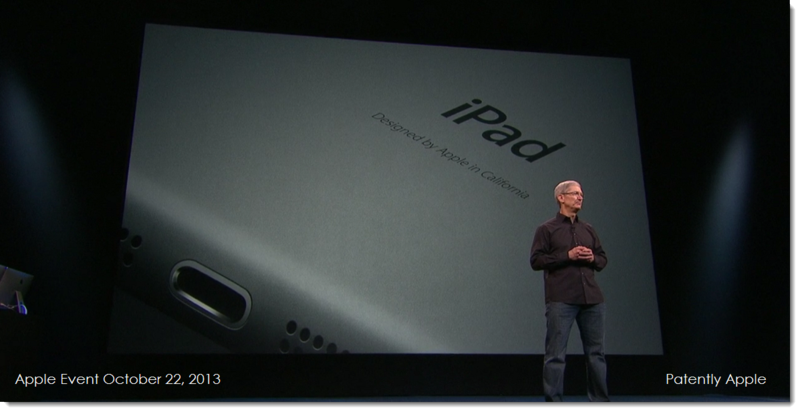 Some of the Little Things Under the iPad mini's Hood

Yes, it's the Retina display that we'll notice front and center when we visit an Apple Store in the coming weeks to see the new iPad mini. Yet there are a few changes under the hood worth noting.

The new iPad mini will also feature two antennas to support Multiple-In-Multiple-Out (MIMO) technology, bringing twice the Wi-Fi performance to iPad Air and iPad mini with Retina display at a blazingly fast data rate up to 300 Mbps. Cellular models of the iPad mini will also come with expanded LTE coverage to accommodate even more LTE networks worldwide, while continuing to deliver comprehensive support for other fast cellular technology around the world (DC-HSDPA, HSPA+), all in a single model.

For more on the new iPad mini, visit Apple's website.

I am speculating on an iPad pro coming up this december.
larger screen more pixels, higher specs....
still more accurate than WSJ

What about the MacBook Pro?

The best update is that they put A7 in to iPad mini, same as in iPad Air. Previous generation had A5

It'll be interesting to see how the market (ie: consumers) react to the $399 starting price of the iPad mini retina. It's the first time, from what I can remember, that Apple has raised the price of an iDevice when adding retina capability.