The US Patent and Trademark Office officially published a series of 36 newly granted patents for Apple Inc. today. In this particular report we mainly cover two of Apple's granted patents. The first one covers Apple's new Lightning connector while the second covers compact ejectable assemblies designed for Micro-SIM cards. Our report also highlights a few other interesting patents that were granted to Apple today including two design patents. Our report concludes with a handy list of the remaining patents that were granted to Apple today should you wish to independently research them further.

According to Apple, data transfers between devices such as computers and peripheral devices, including portable media devices, have become ubiquitous over the last several years. Music, phone numbers, video, and other data are moved among these devices, often using cables to form electrical pathways for signals that carry information between devices. Such cables are connected to these devices using a connector.

In many applications, repeated insertion of a connector plug into a connector receptacle over time may cause wear and tear on the exposed electrical contacts, resulting in a shortened life span of the connector device.

When fabricated with a non-uniform delivery profile, slight differences in the position of each electrical contacts may cause unevenly distributed stresses that degrade the performance of the connector. Additionally, an uneven delivery profile between electrical connectors may cause gaps that may result in premature deterioration of the device, accumulation of debris and reduced aesthetic appeal. 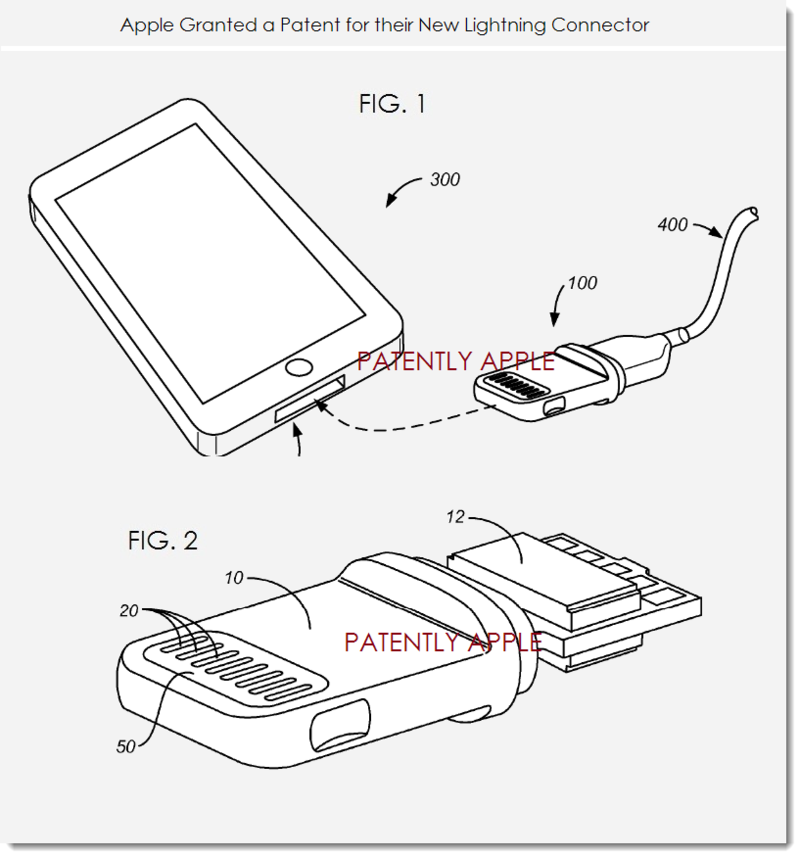 Apple credits Eric Jol, Mathias Schmidt, Edward Siahaan and Albert Golko as the inventors of granted patent 8,561,879 which was originally filed in Q1 2012 and published today by the US Patent and Trademark Office. To review today's 23 granted patent claims and details, see Apple's patent.

Apple has already received 12 design patents for the Lightning connector in Hong Kong China and one in the U. S. Apple's "Lightning" is also a registered trademark in the US. Apple acquired the "Lighting" brand name from Harley-Davidson. In related news, Apple was granted a patent "Connectors and cables with an optical transmitter" under patent number 8,562,226. Patently Apple covered the original application back in October 2011. To review our report on this invention along with multiple graphics, see "Apple Reveals Work on Optical Transmitting Cables."

Apple has been granted a patent today for their invention relating to iDevices with ejectable component assemblies. Each ejectable component assembly may include a tray that can be loaded with one or more types of removable module, such as a mini-SIM card and a micro-SIM card, and inserted into the device. Each assembly may also include a base coupled to a circuit board for electrically coupling with the removable module, a cage for biasing the module down against the base, and a guide for retaining the module at a functional insertion position within the device.

In April 2012 we reported that Nokia had threatened to withdraw 50 or so SIM card related patents from ETSI if they approved Apple's proposed design as a standard. In December 2012 we reported on another patent win for Apple regarding a SIM card design and noted that the ETSI had in fact chosen Apple's design for next generation mobile devices using Micro-SIM cards.

Apple credits Jason Sloey and Michael Yu as the inventors of granted patent 8,564,965 which was originally filed in Q2 2010 and published today by the US Patent and Trademark Office. To review today's granted patent claims and details, see Apple's patent.

It should be noted that Apple also recently filed for a patent relating to a SIM card for future wearable computers.

Some of Today's other Granted Patent Notables

Other noteworthy patents that were granted to Apple today include one relating to composite laminate made of nonwoven carbon of glass fiber using prepreg. It's a material that Apple may use in future iPad designs according to a recent patent revelation. Another granted patent covers the iPhone acting as a remote control for your desktop computer. See our original patent application report dating back in December 2009 for graphics and more.

Apple was granted two design patents today. The first design patent (D691,985) is for the original 2007 iPhone stand which included a slot for their now defunct Bluetooth headset. The second design patent (D692,019) is for Apple's GUI representing their 3D-like glass shelf effect where iOS apps sit on at the bottom of the iPhone, iPad and iPod touch. Note that dotted-lined areas in the design don't count as the design. They're only there for context to assist you in visualizing what is actually being patented. 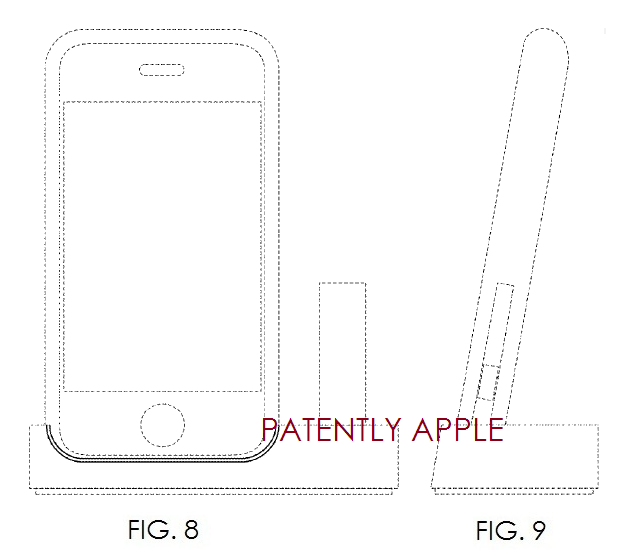 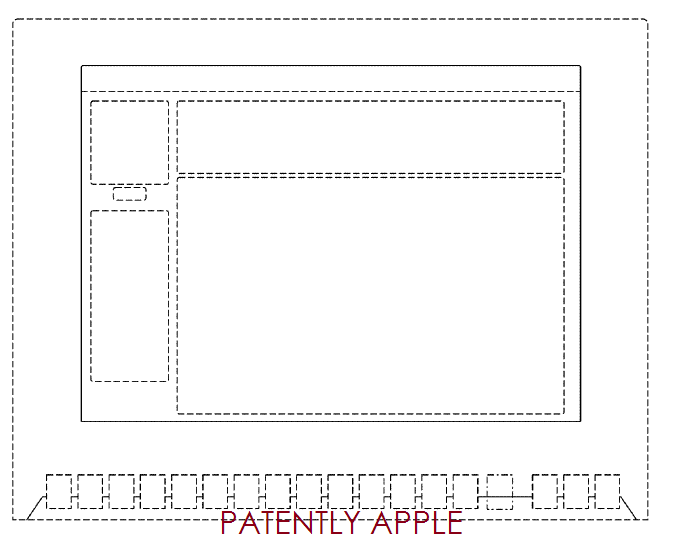 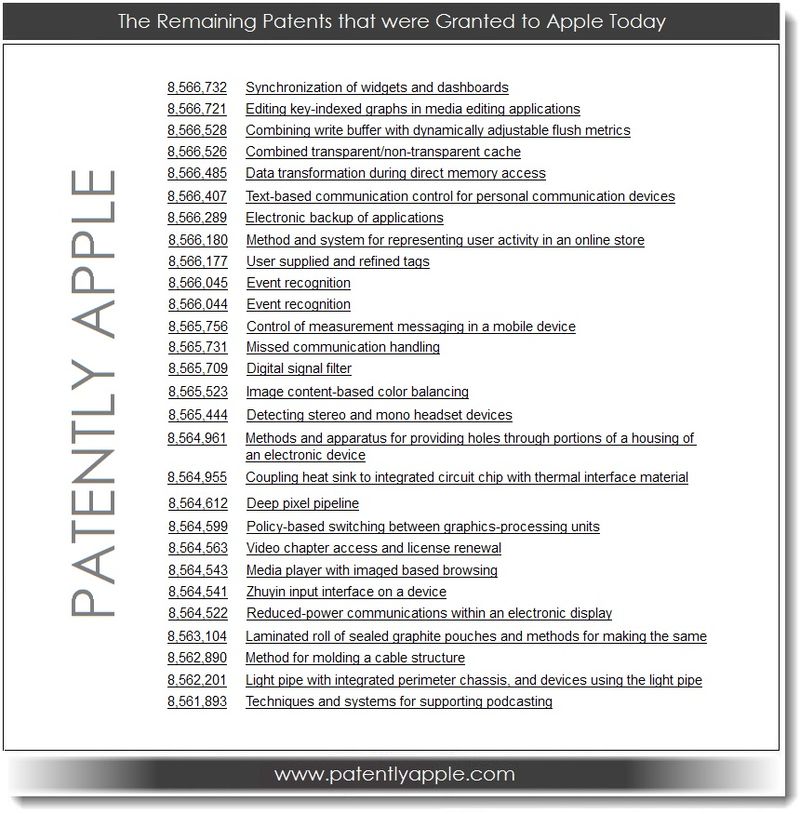