On October 24, 2013, the US Patent & Trademark Office published a patent application from Apple that reveals that they're still hard at work on a sophisticated next generation human recognition system. The work on this new system began in 2009 and their most elaborate work on this project was actually revealed in November 2012. We covered Apple's invention in great detail in our report titled "Apple Advances their Multi-Level Presence Sensing System." The 2012 patent provided the image of an HDTV and in this latest patent filing, Apple points to television content that may be R-Rated not being able to play if a young person walks into a room while the content is playing. Apple's new system will instantly scan an individual entering a room and adjust the TV as required. With an elderly person walking into a room, the audio may automatically be adjusted higher. If a Spanish friend walked into your living room, then the TV or Movie content would begin to present Spanish sub-titles. The advances discussed in the patent include fingerprint scanners, retina scanners and much, much more.

Many electronic devices provide the ability to sense or detect information from its surroundings when instructed by a user. In particular, many computers, laptops, tablets, cellular telephones, personal digital assistants, and other electronic devices include one or more cameras that can capture still or moving images and/or one or more infrared detectors that can detect heat data. Many of these devices also provide a user with the ability to access content using the device and to alter settings relating to the presentation of the content according to the user's desire. For example, a user may "login" to an electronic device, access private emails, play an adult-rated movie, halt playing of the movie when a child walks in the room, and perform many other actions using the device depending on the circumstances. However, one or more manual actions must be performed by the user in order to accomplish each of these tasks and, oftentimes, the user may not even be aware that one or more of these actions should be performed (e.g., that playback of an adult-rated movie should be stopped because a child has stepped into the room).

Apple's invention relates to a method of controlling output of content using an electronic device. The content may be associated with at least one rule that includes at least one condition and at least one action.

As yet another example, a microphone may capture audio data that may be analyzed to detect a voice of one or more particular individuals.

In some embodiments, access to particular content may be requested, and the electronic device may grant access to the requested content only if one or more conditions of a rule defined for the content is satisfied (e.g., only if the profile of detected individuals includes a required user and no one else other than the required user (e.g., access to a sensitive e-mail may only be granted if a specific individual is detected and no other individual is detected)).

In other embodiments, particular content may be presented (e.g., an adult movie may be played) while a rule defined for the content is checked. If a condition of the rule is satisfied, for example, the electronic device may alter a presentation of the content by performing an action of the rule (e.g., the electronic device may instruct a media player application to stop the playback of the adult movie when the profile of detected individuals includes at least one child). The output of various types of content may be controlled by such rules, including, for example, e-mails, documents, files, applications, movies, songs, audio clips, video clips, TV programs, any combination thereof, and any other type of content.

Apple's patent FIG. 1 noted below is a schematic view of an illustrative electronic device 100 that may control output of content. The key component here is the detector which is shown below as #114. 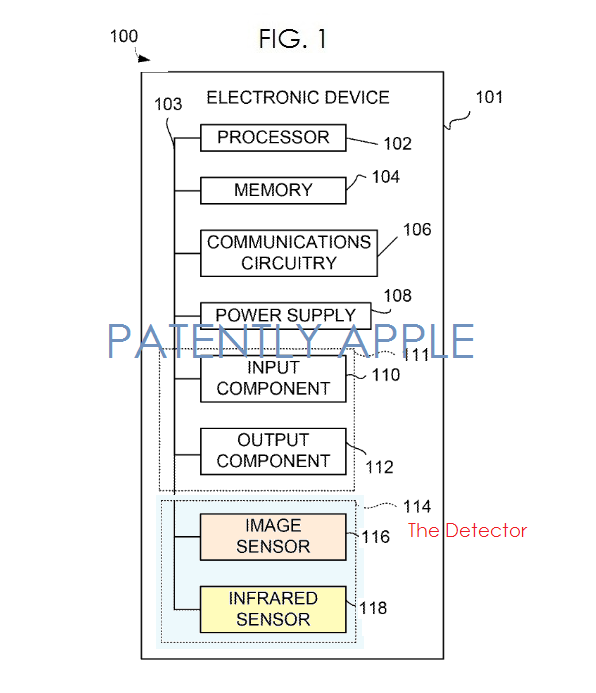 The detector found in Apple's patent FIG. 1 may include one or more sensors of any suitable type that may capture human recognition data (e.g., face data) that may be utilized to detect the presence of one or more individuals. For example, the detector may include an image sensor and/or an infrared sensor.

As another example, the detector may include a heartbeat sensor for detecting heartbeats of one or more individuals. As yet other examples, detector 114 may include a fingerprint reader, an iris scanner, a retina scanner, a breath sampler, and a humidity sensor that may detect moisture and/or sweat emanating from any suitable portion of an individual's body.

The detection module may utilize data that may be stored in a detection data structure and any other available data when analyzing current captured human recognition data for determining current detected human profile data.

Sounds a Lot like a Future Apple TV Feature

Additionally, a display may be turned off, a volume setting of the presentation may be lowered or muted, and/or sub-titles associated with content altered according to the rules that the user sets.

In another interesting example, Apple notes that the content control system may alter a presentation of content in response to an individual that is associated with a particular language being detected during the presentation. For example, if an individual associated with the Spanish language is detected, then the particular multi-media content, like a movie, may be automatically translated into Spanish.

Apple's patent FIG. 4 note below is a flowchart of an illustrative process for controlling output of content. 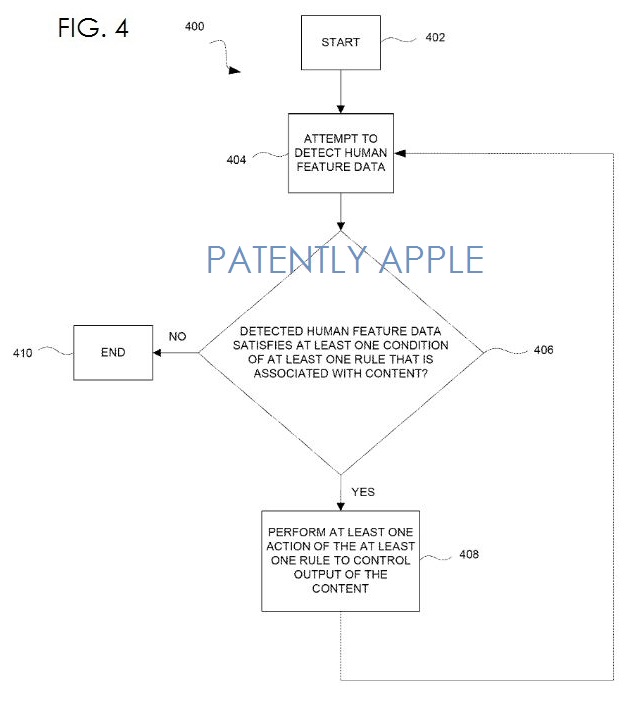 Apple credits Michael Ingrassia and Nathaniel Hramits as the inventors of patent application 20130279744 which was originally filed in Q2 2012. For more on this fascinating patent, see Apple's invention. 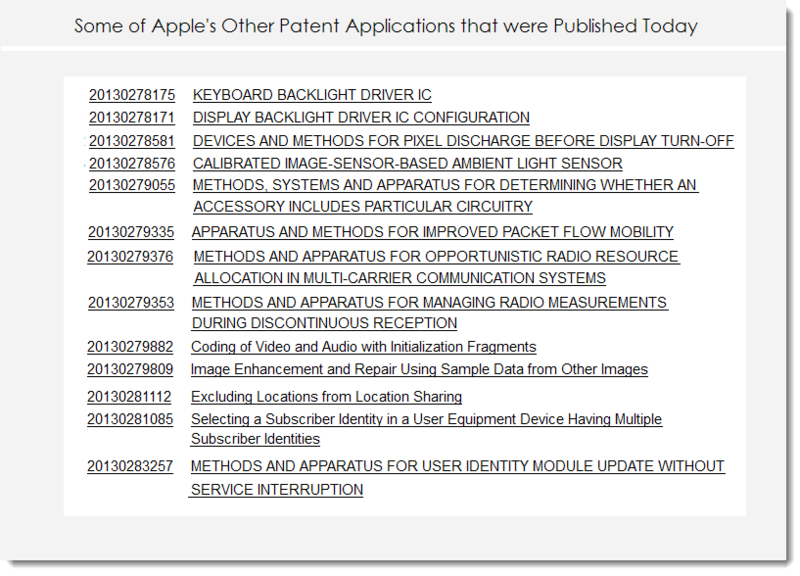 Samsung files Four Major Flex Display Patents in the US