According to a new IDC report, worldwide tablet shipments grew to 47.6 million units in the third quarter of 2013. While slightly below the firm's forecast, the number still represents 7.0% growth over the previous quarter and 36.7% growth compared to the third quarter of 2012. Android products once again drove much of the shipment growth in the market as iOS growth stalled and Windows tablets continued to struggle to win over consumers.Yet the stats showing Samsung as the one driving Android may not be all that they're cracked up to be.


IDC basically echoed what IHS stated in their quarterly review on tablets in that there were no new iPad product launches in the second or third quarter to drive volume, so Apple experienced a quarter-over-quarter decline in shipments from 14.6 million in 2Q13 to 14.1 million in 3Q13. However, with the new iPad Air shipping November 1st and the refreshed iPad mini with Retina scheduled to roll out later in November, IDC expects Apple to enjoy robust shipment growth during the fourth quarter.

Jitesh Ubrani, Research Analyst with IDC's Tablet Tracker stated that "With two 7.9-inch models starting at $299 and $399, and two 9.7-inch models starting at $399 and $499, Apple is taking steps to appeal to multiple segments. While some undoubtedly hoped for more aggressive pricing from Apple, the current prices clearly reflect Apple's ongoing strategy to maintain its premium status. It's worth noting that Apple wasn't the only one to increase the price of its small-sized tablet during this product cycle: Both Google and Amazon increased the price of their newest 7-inch tablets from $199 to $229 to cover the higher costs associated with high resolution screens and better processors."

Samsung Floods the Market with Tablets

In one of our August reports titled "Samsung Obsessed with Dethroning Apple as the King of Tablets," we quoted a DigiTimes report that stated that "Samsung is adopting a strategy to flood the market with various tablets including 7, 8- and 10-inch models, as it seeks to dethrone Apple."

In IDC's report they note that "Samsung once again secured the second position with shipments of about 9.7 million units. The company, which owes a measure of its tablet success to its ability to bundle them with other successful Samsung products, such as smartphones and televisions, grabbed 20.4% of the worldwide market with 1.2 million units shipped and a 2.5% share.

That's how Samsung is "flooding" the market with tablets by bundling them in with electronics like televisions as a bonus buy and who knows, maybe with fridges or stoves too. No wonder Tim Cook pounded the table during the iPad event when he stated the following:

How can Samsung appear to be catching up to Apple on tablets in IDC's chart when the usage stats aren't backing up the sales stats? Doesn't something really stink here? Yes, of course.

Samsung's great plan to flood the market by virtually giving away their tablets in promotions to sell other Samsung premium appliances and TV products is not the same thing as actually designing a product for people who actually use them. They're fooling the press and analytical houses with baloney straw statistics. Reporters are so dumbed down to push stats that they brainlessly quote these numbers believing that they actually have weight.

With that said, the empty statistics that IDC presents below is what analysts will talk about first and foremost: the big increase in Samsung tablet growth of 123%. Though I give IHS credit for their courage to step out and clearly say that there's a "Growing Imbalance between Shipments and Usage Measurements in the Tablet World." 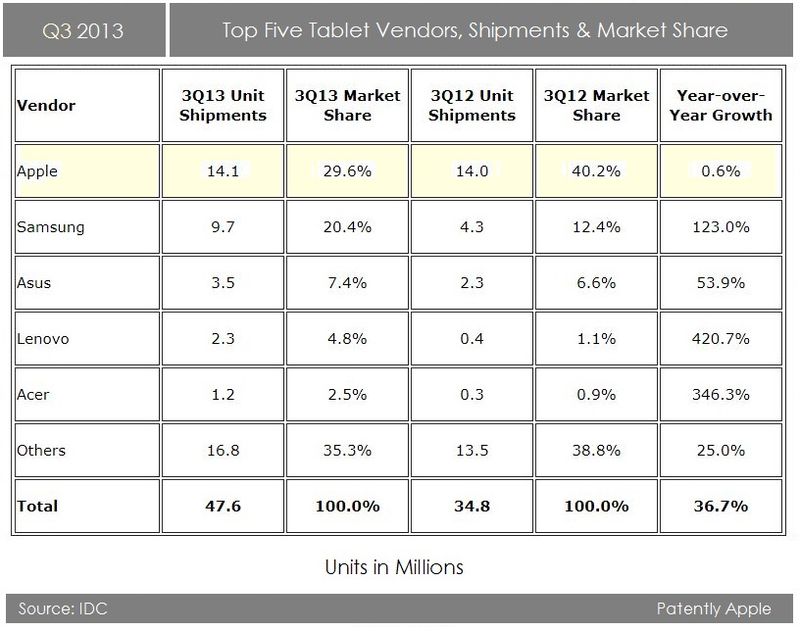 On another note, one of the up and coming tablet players in the market is Lenovo who just released their next generation Yoga tablet yesterday that at least shows some design originality – even though it looks like the top end of an Apple wireless keyboard. You'll see what I mean when you view the promotional video below.


It's a nice looking unit but relying on Android isn't going to do much for Lenovo. Then again, they did buy out the rights to WebOS from HP. So over time, I'll be keeping an eye on where Lenovo is going with mobility once they have their own OS or supplementary OS up and running.

In the end, Apple's tablet business is likely to enjoy a nice bounce back over the next several quarters with the iPad Air and iPad mini with Retina once they get up to speed. And with Apple's move to include iLife and iWork software suites to support the new iPads, the iPad story is only going to get better over time.

Some think that Apple should create a new plastic $150 tablet and use it as a giveaway with the purchase of a new MacBook Pro to match Samsung's antics to falsely boost their "tablet stats." I'd love to see Apple go toe to toe with Samsung and play their game for a change.

But no, that's not the Apple we know. Apple will not only cater to the mid to high-end segments of the market for profit, but also for lifting the quality bar of our electronic devices ever higher every year for us mere mortals to enjoy and grow with. That's Apple and that's why their customers still line up around the block to get their hands on the next great thing; because they actually use them!