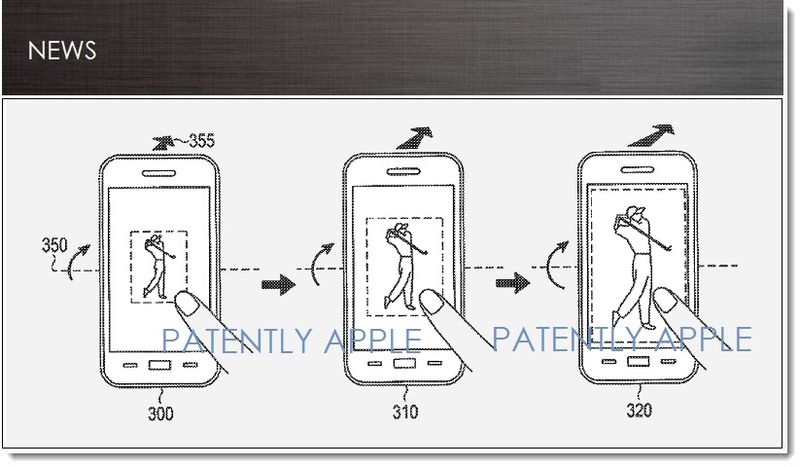 Whenever I look at new mobile phones at a retailer I double-tap the display just to see if text will zoom out perfectly to fit the screen like Apple's famed "tap to zoom" feature does. Most competing smartphones fail at this test and miserably at that. I recently noticed that Samsung's Galaxy 3 (and/or Note) reacted to the double tap almost as well as Apple's iOS. But wasn't' Samsung found guilty of patent infringement for using this feature? Yes, most definitely and to make matters worse, Patently Apple has just discovered a new patent filing from Samsung that is trying to hijack Apple's long standing feature. Does that really surprise anyone anymore?

In patent claim number one of their patent Samsung states: " A mobile terminal for a motion based screen control, the mobile terminal comprising: a touch interface for displaying an image on a screen and detecting a touch input according to a touch by a user input means on the screen; a sensor unit for detecting a motion of the mobile terminal; and a controller for determining whether to enlarge or reduce the image according to the touch input and for controlling, when the motion is detected through the sensor unit in a state where the touch input is maintained, to enlarge or reduce the image corresponding to the motion.

Apple's webpage going back a few years clearly shows that this feature has been a long standing feature of iOS and we know that Apple has patented every little unique feature that there is. 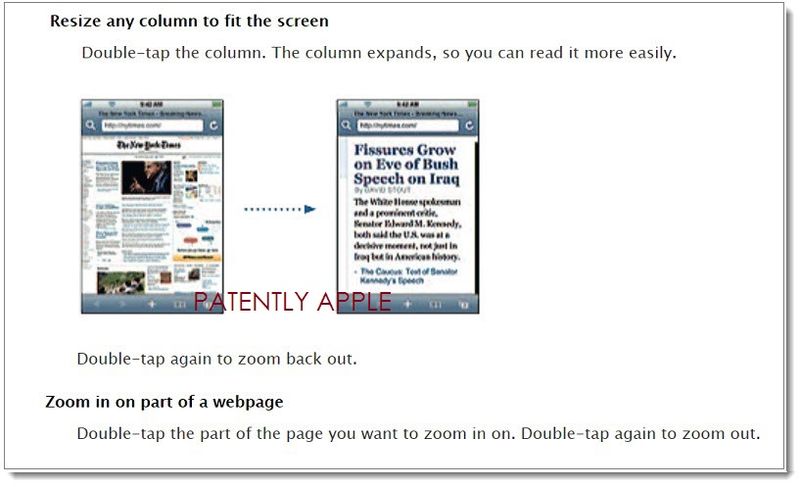 In fact, this particular feature has been protected under the famed "Tap to Zoom" patent 7,864,163.

The term double tap to zoom in or out is mentioned 17 times in the patent.

In January of this year Judge Koh denied Samsung's bid to invalidate Apple patents that included the "tap to zoom" patent as noted in a Scribd document titled "Indefiniteness Ruling" that is found in our report.

As a backup plan, it appears that Samsung now hopes that the US Patent and Trademark Office will be stupid enough to not notice that they're patent application 20130239032 is trying to hijack Apple's long standing patented feature.

Will Apple's legal team challenge this patent application? Time will tell. But the record stands: Samsung was found guilty of patent infringement and the "tap to zoom" patent was one of those patents.

Samsung's attempt to work around Apple's patent so that they can retain this important feature for their smartphones shows that this copycat will stop at nothing to ignore the law and continue to steal Apple's IP in broad daylight. I never thought that I'd say it, but the EU has more grit at threatening Samsung than the US authorities do.

This latest news comes on the back of news that broke in Europe last week that the European Union regulators have told Samsung Electronics to offer more concessions to settle EU charges that its use of patent lawsuits against rival Apple breached antitrust rules after a first offer fell short. If Samsung fails to allay the European Commission's concerns, it could face a fine of as much as $18.3 billion or 10 percent of its 2012 revenues.

What are we missing here? If a thief is caught stealing $1000 from a bank they'll get 10 years in prison. But if a white collar thief steals billions from a US corporation and hurts millions of honest hard working shareholders along the way, they simply get to laugh all the way to the bank and never look back. Is the damn system broken or what? Companies like Samsung get to go on their merry way with reckless abandon and continue to steal technology whether it's Apple's or not. What do they have to fear? The punishment doesn't meet the crime and Samsung knows that.

Here’s a idea that I think would work perfectly on your device. Feel free to patent the hell out of it:

I would rather buy any other company if not Apple but never buying Samdung in my life!
Apple products are the best on the market!!!