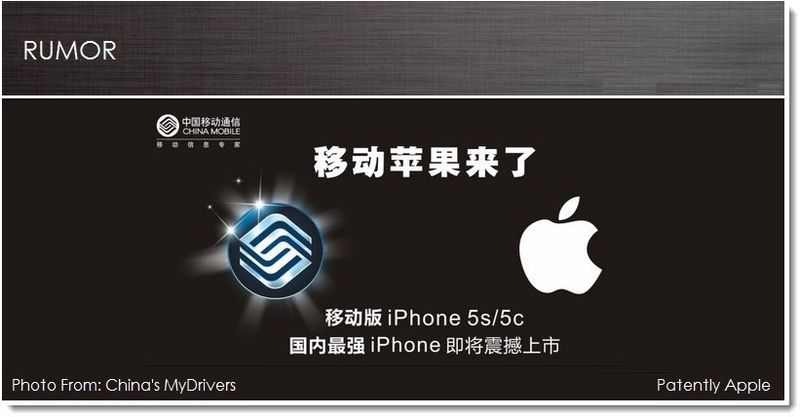 On Wednesday we reported that IDC was forecasting a huge leap in iOS 7 adoption in China for 2014. The holdup to the iPhone being released in China is a technical one at the moment as the carriers await new 4G licensing. A new report out of China presents us with China Mobile's prepared advertising for a launch supposedly to occur sometime in November if the licensing remains on schedule.


The Chinese Site "MyDrivers" found the ad on a local blog showing a "poster" that is supposedly from China Mobile. The site states the poster is promoting the "strongest" iPhone.

The site also notes that the " iPhone 5S/5C packaging and testing will be the end of September, the end of October beta, then the earliest time to market in November of this year."

Here's to hoping that the rumor pans out for November as it'll handsomely pad Apple's holiday quarter financials.

Apple needs to sign up a monopoly deal with MA and V to make the future payments by fingerprint scanner. If CC companies deny that- Apple should bring "Apple Payments" system to compete against CC companies. First get into high end stores and then get into masses. Samdung loses big time and Apple wins forever.
Apple also needs to get rid of Samdung for any parts for its products. Get the best alternatives soon!