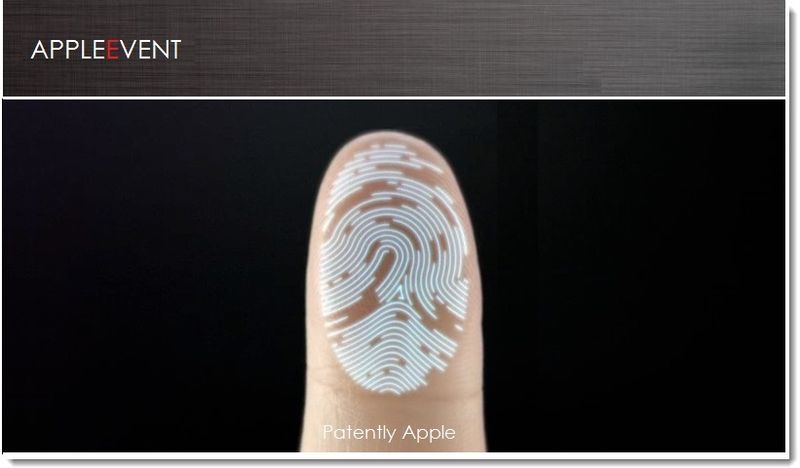 Leading up to Apple's iPhone event yesterday was exciting. Patently Apple first discovered and posted a report last Saturday detailing a phenomenal new Apple patent filing which detailed a secret fingerprint scanner project. One that would hide a fingerprint scanner right under Apple's famed Home button. When Apple revealed Touch ID at their iPhone Event yesterday, it was such a buzz. It may only be a security feature and one that will work seamless with future e-commerce applications, but the genius of how they implemented this is what makes it such a cool breakthrough. Powered by Apple's new A7 chip with a 64-bit architecture, this incredibly advanced feature came to life. It's so advanced and yet so simple. It's so advanced and yet invisibly seamless. It's this kind of legendary thinking that makes Apple the true innovator that they are.

One of the most notable segments of Apple's iPhone Event held today in Cupertino was the unveiling of the all-new iPhone 5S Fingerprint scanner. Yesterday we posted a report titled "Apple's new iPhone Fingerprint Scanner Patents Come to Life" which chronologically covered Apple's patents leading up to yesterday's breakthrough announcement. Our original reports posted on August 17 and September 07 were the patents that best covered the technology that would end up in the new iPhone 5S. 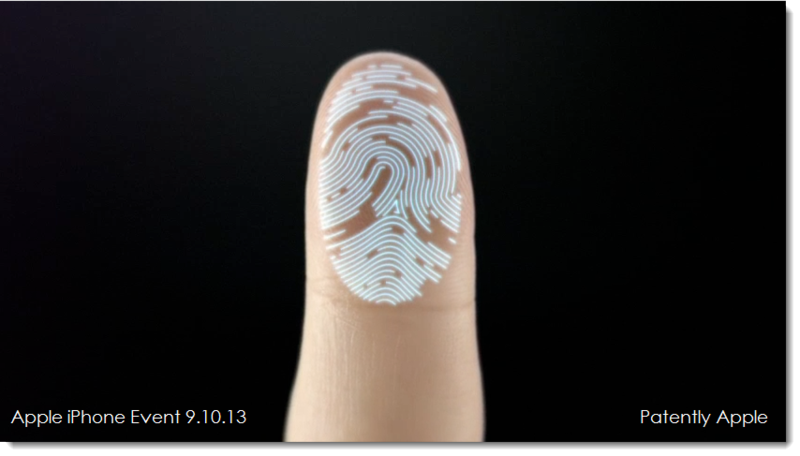 "Your fingerprint is one the best passwords in the world. It's always with you and no two are exactly alike. So it made perfect sense to create a simple and seamless way to use it as a password. 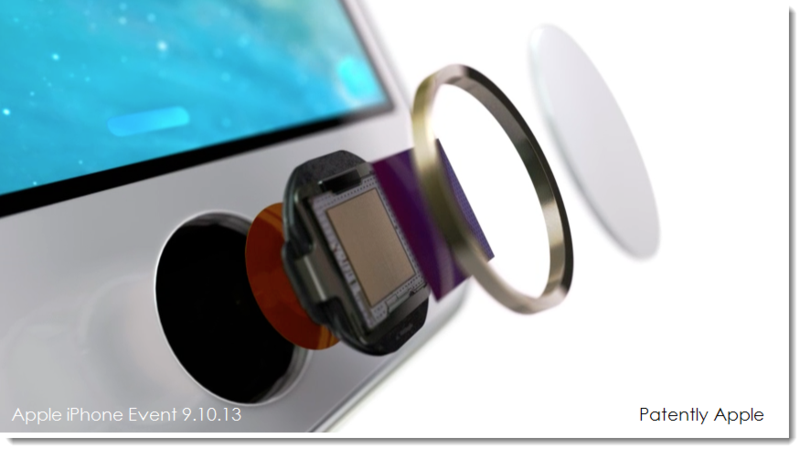 With a touch of your home button, the Touch ID sensor quickly reads your fingerprint and automatically locks your phone. You could even use it to authorize purchases through our stores for music, movies, TV shows, apps and books. 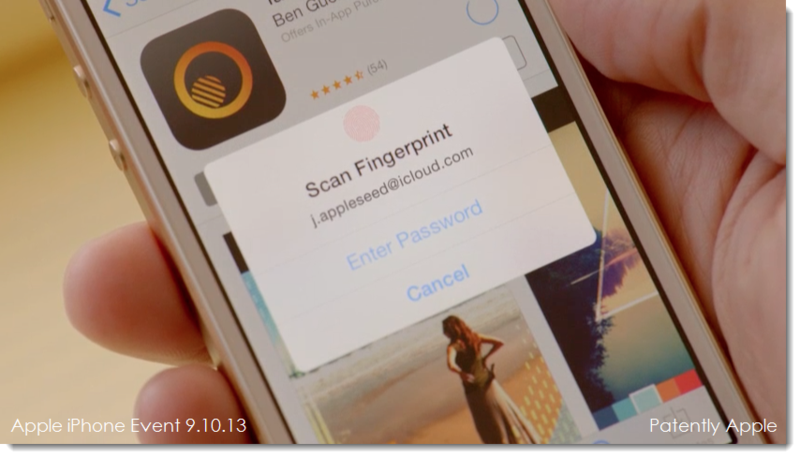 Setting up Touch ID to recognize your fingerprint is easy and every time you use it, it gets better at reading your print.

It can read multiple fingerprints and read them in any orientation. It categorizes your print by one of three basic types: Arch, Loop or Whorl. It maps individual details in the ridges that are smaller than the human eye can see. 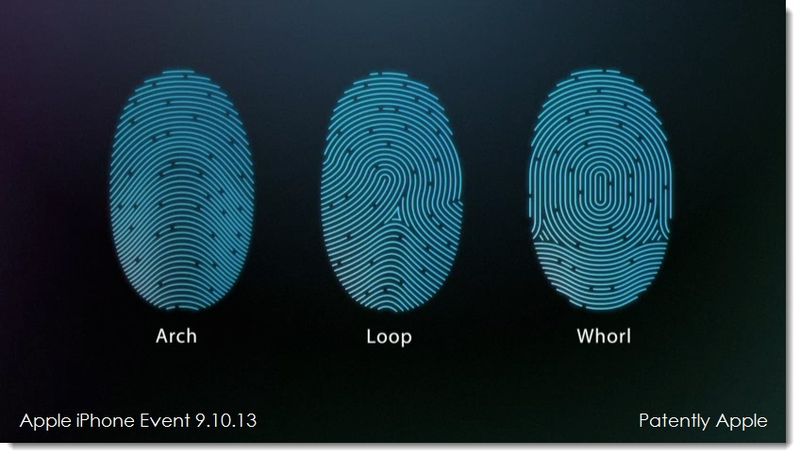 It even inspects minor variations in ridge direction caused by pores and edge structures. Touch ID uses all this to provide the most accurate match in a very high level of security. 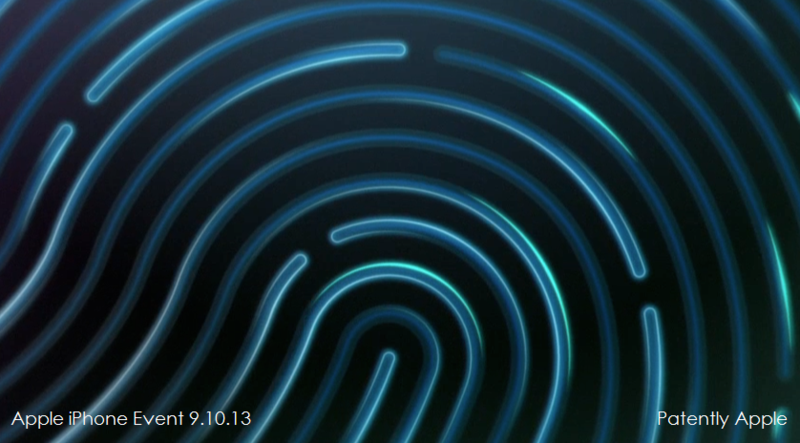 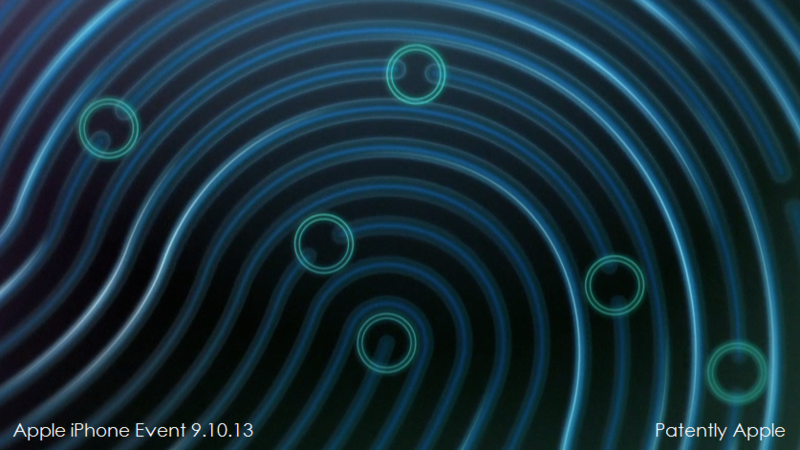 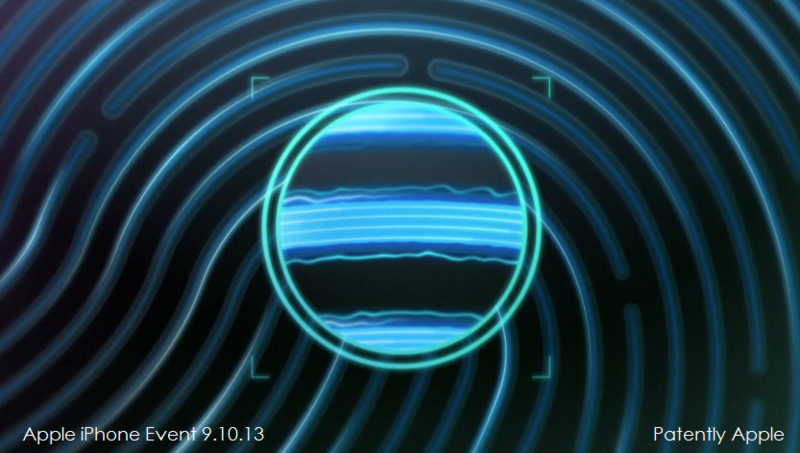 The technology within Touch ID is some of most advanced hardware and software that we've put into any device. The button itself is made from Sapphire Crystal, one of the clearest, hardest materials available. This protects the sensor and acts as a lens precisely focused on your finger. The steel ring surrounding the button detects your finger and tells Touch ID to start reading your print. The sensor uses advanced capacitive touch to take in essence a high resolution image of your fingerprint from the sub-epidermal layers of your skin. It then intelligently analyzes this information with a remarkable degree of detail and precision. 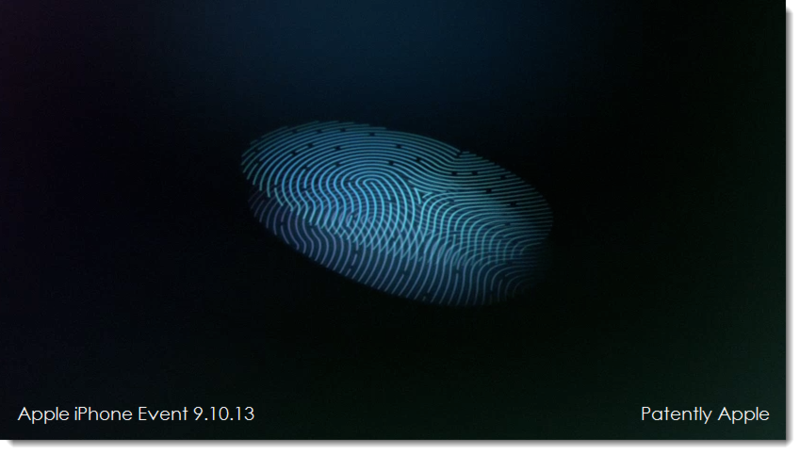 All fingerprint information is encrypted and stored inside this secure enclave in our new A7 chip. Here it's locked away from everything else, accessible only by the Touch ID sensor. It's never available to other software and never stored on Apple servers or backed up to iCloud." 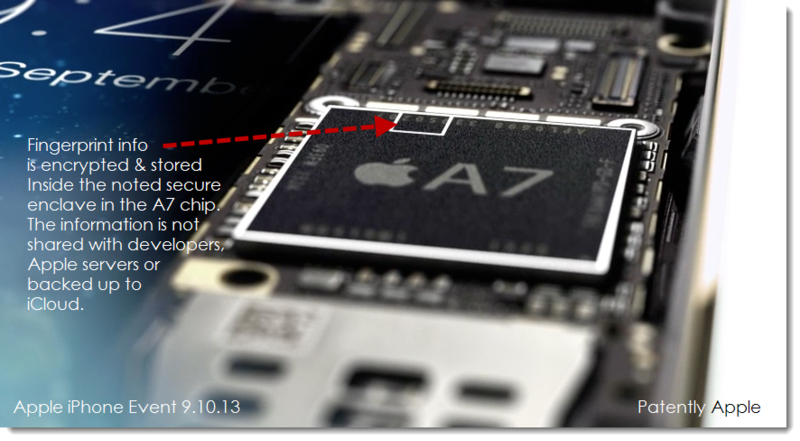 Jony Ive closed out the video by stating that "Touch ID defines the next step of how you use your iPhone; making something as important as security, so effortless and so simple. We believe that technology is at its very best; at its most empowering when it disappears.

A First Step Toward iWallet

We've known for some time that Apple bringing fingerprint technology to the iPhone would directly lead to an e-commerce application in addition to it being an authentication feature. Back in March 2012 we pointed to the iWallet working with iTunes. In Apple's video on Touch ID, Riccio made it clear that users will be able to authenticate their purchases on iTunes. This is phase-one of Touch ID and it's the easiest. Your current credit information that relates to your credit card is already in Apple's iTunes system. Adding a matching fingerprint to your current credit card information is where it all begins.

Apple admitted that "Setting up Touch ID to recognize your fingerprint is easy and every time you use it, it gets better at reading your print." Yes, Touch ID will get better over time which is saying that there may be a break-in period testing it out before moving to next level, which is going public with systems such as ISIS. When and how Touch ID will work with such services is unknown at this time.

Apple's Riccio mentioned the sub-epidermal layers of the skin being analyzed by the Touch ID sensor. In Apple's August 2013 patent application they revealed that the scanner would be able to sense "live tissue." This is a security measure to ensure that the fingerprint is from a living person so as to not be spoofed.

The Power of Apple's New 64 Bit A7 Processor

With Apple's new A7 processor, Apple introduced the world's first smartphone powered by a 64 – bit architecture. The first real app to take advantage of this on the iPhone 5S is Apple's new Touch ID. To pull off lightning fast analysis of a user's fingerprint down to the sub-epidermal layers takes incredible computation. It's why this feature isn't on the iPhone 5C. It's why the competition failed to deliver such an advanced feature.

Yet, there's more to follow on this front. Apple is likely to integrated Touch ID into other products over time, including the upcoming upgrades to the iPad and iPad mini. Simple advanced security is one of the key selling features of Apple's key iDevices this fall. Eventually, Touch ID will work its way in second tier products such as MacBooks, Apple TV and future wearables.

The new Touch ID feature is the type of advancement that we've come to expect from Apple. It's a feature that's backed by incredibly advanced technology yet elegantly implemented into an invisibly simple and seamless security feature. It's a masterpiece; a feature that some may never understand or appreciate. But Apple fans get it and we enthusiastically applaud the Crazy Ones of Cupertino for pulling off this feature which is yet another industry-first. Well done Apple. Well done indeed.

I'm not an engineer, John, but Apple has two standing patent applications noting a fingerprint sensor/scanner under the display as noted in the report below:

A company by the name of Pantech has a fingerprint scanner on the backside of their smartphone as noted in the very last graphic of our report noted below:

Apple's use of iBeacon is currently used for AirDrop. It's unclear whether or not iBeacon will be used in relation to Touch ID now or in the future. Apple's patent hints of NFC used in conjunction with wireless charging. I have no idea if iBeacon has a similar capability for such an application.

As to your specific question about iBeacon used for e-commerce applications. A group named ISIS made mention recently that they would work with Apple's NFC alternative technology and so I would take that response as an open door for Apple's use of iBeacon. But this is only an opinion. Until a formal statement from Apple emerges, we're in the dark like you.

So in addition the the tech hurdles and seamless integration into the user experience, is the additional breakthrough the integration through the home button? Since most other smartphones lack this central button, where/how else could a similar feature be integrated? And if a similar function could be integrated into the smartphone's screen, would it be as secure as the iPhone implementation.
Also, do you foresee that this fingerprint authentication will be coupled with ibeacon functionality to facilitate monetary transactions?
Thank you for an interesting read.

"A feature that some may never understand or appreciate"