In just a few short hours, Apple will be unveiling the new iPhone 5S and the iPhone 5C. One of the twists that might be announced at the iPhone event is that the Apple and Japan's DoCoMo may have struck a distribution deal. If true, the Korean Press have stated this morning that this would be disastrous for Samsung. That's such a shame, isn't it? UPDATED 9.15.13 6 PM


At the moment, Apple and Sony are neck in neck for the number one position in Japan with 21-22%. Samsung is third with 14%.

In May of this year, Samsung's share started increasing when the Galaxy S4 was selected as one of the strategic terminals to receive extensive subsidy support from NTT DoCoMo, the largest mobile common carrier in Japan. Samsung Electronics continued to be second highest in the Japanese market from the second to the fourth quarter of last year.

However, NTT DoCoMo's decision to sell a new iPhone model in defense to the decreasing subscribers count brought changes to market conditions. Apple's market share is forecast to increase sharply as iPhone is showing a steady rising tendency in the Japanese market and NTT DoCoMo is expected to implement aggressive marketing strategies.

"Traditionally, popularity of the domestic products has been high in the Japanese mobile phone market. In addition, since the release of smartphones, the influence of iPhone has been quite strong," explained an industry insider. "NTT DoCoMo's decision to introduce iPhone as a strategy to increase its share in the communications market can be a crisis for Samsung Electronics."

So besides the iPhone news that we'll be hearing about today, I'm sure going to be cheering for an Apple-DoCoMo deal to be announced. That would really make my day.

Update Sept.15, 2013 6 PM: Apple Made my Day! Apple announced that they have a deal with NTT Docomo as noted in the iPhone Event photo below: 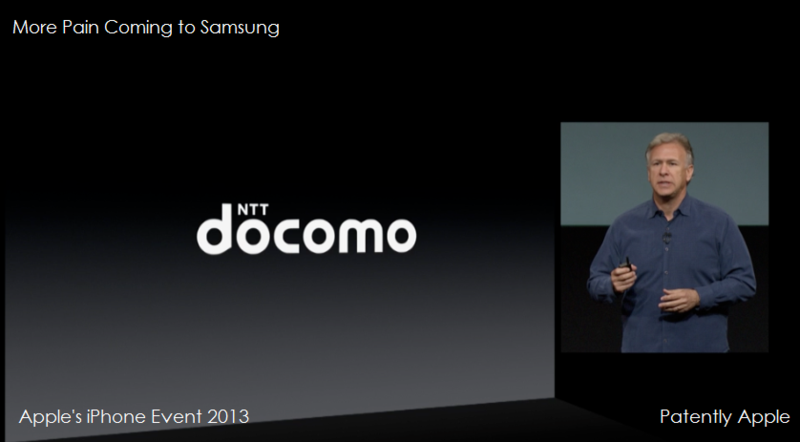