In February we posted a report titled "Samsung to Release a New High-End Smartphone in Q4 with its Own OS to Seriously Challenge Apple's iOS." As a global smartphone leader, it was reported that Samsung had to correct its one glaring weakness: Software. Samsung was to introduce its very own operating system at the Mobile World Congress, but limited its exposure to a behind-the-door presentation that apparently didn't go well. Now the Korean press is stating that Samsung is purposely delaying the debut of a high-end smartphone with the Tizen OS this year.


Samsung Electronics reportedly has slowed down the development of its Tizen operating system, which it co-developed with Intel – a move which could dash hopes of other Android smartphone vendors expecting to grab market share from the Korea-based vendor once it began shifting to Tizen, according to industry sources.

The delay is reasonable since the planned shift would benefit rivals in the Android camp, including LG Electronics, HTC, Sony Mobile Communications, and Huawei, among others, and so there is no reason for Samsung to push ahead with Tizen at the moment, argued the sources.

Additionally, given that Android has accounted for nearly 80% of the global smartphone market and leads other platforms in terms of popularity, maturity and ecosystem, as well as the fact that Samsung has incorporated Android into its smartphones, tablets, DSCs and notebooks, the possibility is low for Samsung to shift from Android to Tizen overnight barring a drastic overhaul in strategy for Android by Google, the sources commented.

Samsung Electronics has broad ambitions for the Tizen OS which is an open operating system the company has taken a lead role in developing to wean itself off its dependence on Android and Google.

Earlier this month, CNET Korea interviewed Samsung Electronics co-CEO J.K. Shin, who runs the company's IT and mobile communications division who made it clear that Tizen is more than just a pet project and "simple alternative for Android." Indeed, he envisions Tizen running on more than just smartphones, and that it will eventually move to vehicles and other industries.

Out of the blue we learn that North Korea will be entering the smartphone business with a phone branded the "Arirang." The North Korean news site posted several photos of Kim Jong Un visiting their smartphone plant called the "May 11" plant on August 10. 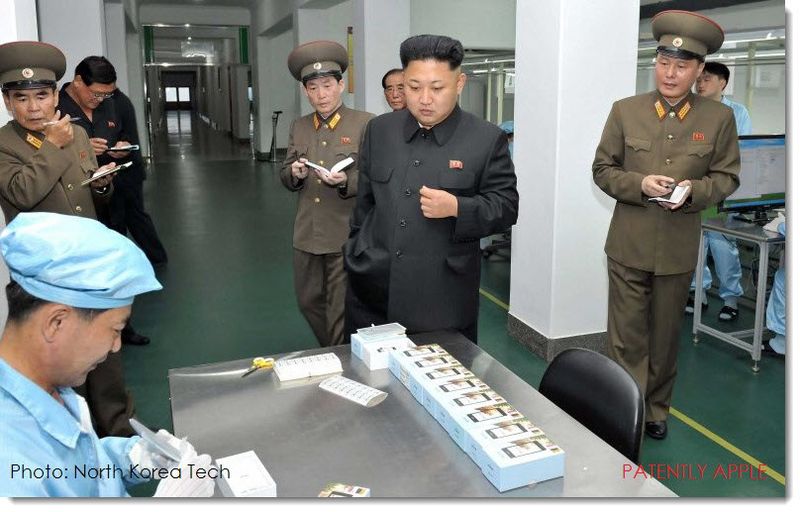 The report states that the Korean plant is working with a Chinese source who makes the phones that then get approved at the Korean plant as noted above. The new smartphone is an Android based phone and is likely one of the undisclosed reasons for Eric Schmidt's visit to North Korea in January. The North Korean news site states that production of the new phone began days ago.

Although it's an odd twist for North Korea, I think we'd all prefer to see this country focus their efforts on expanding their economy based on producing electronics like smartphones rather than exporting weapons and nuclear technology. It's a start.

I fully agree with you!

It will be interesting to see how Samsung fairs in the marketplace with Tizen when it has to compete with iOS and Android and Windows.

Even though Intel is a developer of Tizen. I do not see this as a positive for either company.

Taking the time to come up with original work instead of unabashed copying functionality of other operating systems will be a huge effort.

Getting developers onboard to support Tizen will not be easy especially since many of Samsung's underhanded tactics are being exposed to the world.

Developers have their own images to foster in a positive light and being associated with a company that is being seen as a thief, a fast follower instead of a leader, a fracturer of a leading operating system is not going to go well at all.

Tizen had better get back on schedule fast because Samsung's developer conference is approaching and promoting Android instead of Tizen is probably going to backfire.

Damn! I was really counting on Samsung shifting to Tizen OS on all it's high-end smartphones next year to blunt Android's rapidly growing market share. Samsung screwed Apple again. Samsung really punked out after the CEO boldly made those statements on stage. I'd sure like to know exactly what went wrong with Tizen to delay development just like that. At least for once I finally hear Samsung got hung up on something. You'd think it was the most perfect company in the world that never runs into problems just like they say Apple always does.