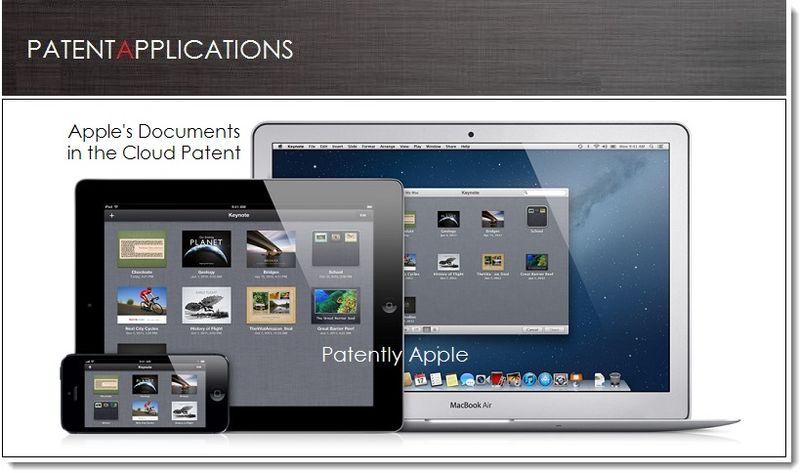 On August 8, 2013, the US Patent & Trademark Office published a patent application from Apple that revealed their original iCloud service for Documents in the Cloud. Our report provides a basic overview of the patent related to Documents in the Cloud along with a video of Steve Jobs introducing the new service at WWDC 2011.

Conventionally, a user's computing experiences were typically focused upon a particular device within a given environment. For instance, the user might interact with a desktop computer in the work environment, to store and access work-related documents, and might also have a home computer for storing and accessing personal documents. Alternatively, the user might employ a portable computer, e.g., a laptop computer, for use in both the work and home environments. In either case, the documents that the user created, edited, or otherwise interacted with, were typically stored on the user's computing device, or accessed via a network to which the computing device was connected.

More recently, the user's experience hasn't been limited to a single device for a given environment. Rather, the user might employ a number of different computing devices, such as a laptop or desktop computer, a tablet computer, a smartphone, and the like.

At any given time, the user might view, and otherwise interact with, a particular document on any one of these different devices. To enable the user to access and interact with documents via any one of these different devices, the documents are stored both locally on the devices, and on a remote server that functions to synchronize the stored documents on all of the various computing devices. Thus, regardless of which computing device the user employs to access a document, the same version of the document will be present on each device. This type of computing experience is sometimes referred to as "cloud computing."

Apple's invention describes a user interface that facilitates easy understanding of which documents that are shared amongst multiple devices, and access to the documents.

In particular, a user interface is described in the context of its implementation in a so-called "cloud computing" environment, in which documents are stored on a remote server and can be accessed from a variety of different computing devices.

The server functions to synchronize copies of the documents that are stored on each on each of a number of authorized devices. It will be appreciated, however, that the user interface described herein is not limited to this particular implementation. Rather, the principles that underlie the functionality of the user interface can be employed in a variety of different environments in which application-centric access to documents is beneficial.

In Apple's patent FIG. 1 illustrated below we see a schematic view of a cloud computing environment in which the user interface of the present invention can be implemented. In the illustrated example, the user may have three different computing devices that are used to access, and otherwise interact with, documents, namely a laptop computer 10, a tablet computer 12 and a smart phone 14. The cloud computing environment enables the user to create or download a document on one of the computing devices, and then subsequently view, and interact with, the document on any of the other two devices. 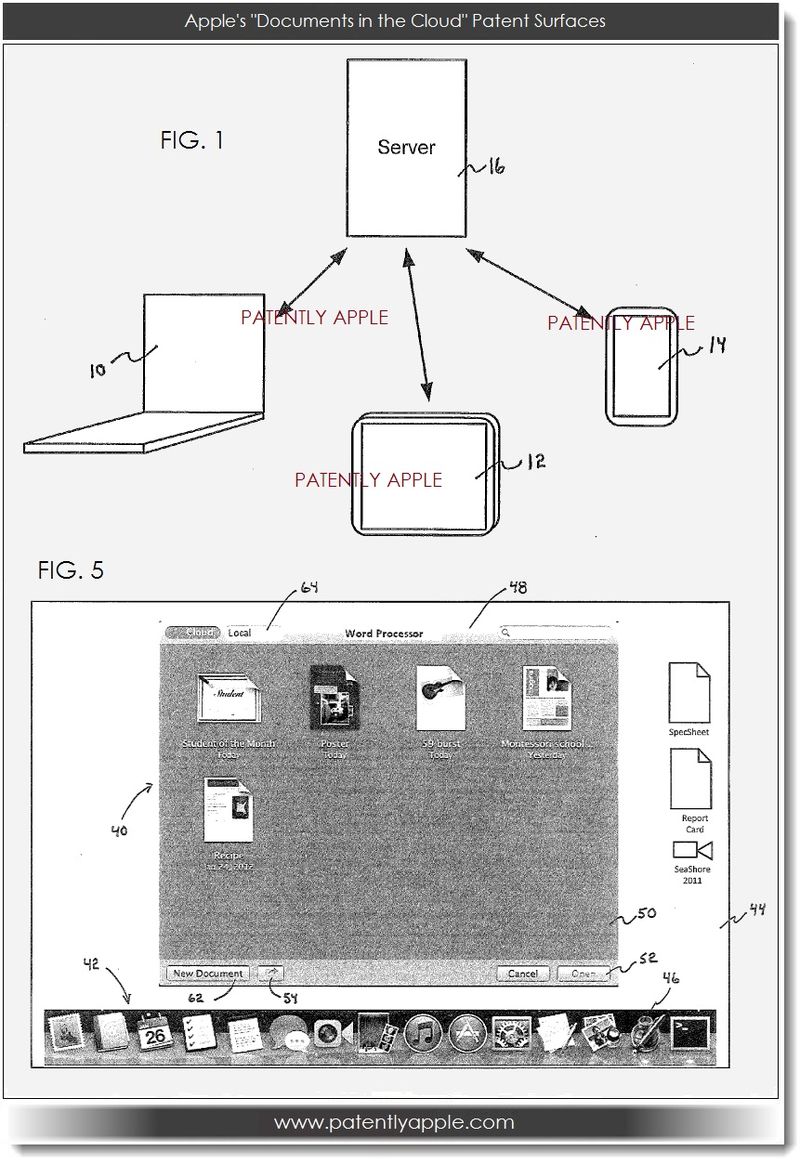 Apple's patent FIG. 5 illustrates an alternative type of user interface element 40 that may be displayed to view and access documents when application-centric storage of the documents is employed, such as in a cloud computing environment which we now know is Apple's "Document in the Cloud" – tapping into Apple's iCloud Service.

Apple's late CEO Steve Jobs first introduced "Documents in the Cloud" during his keynote at the World Wide Developer Conference (WWDC) in June 2011.

The project was obviously a work in progress and at this year's WWDC 2013, Apple introduced iWork for the Cloud which will deliver what Apple fans really wanted in the first place, this fall. With iWork for iCloud Apple is bringing Pages, Numbers, and Keynote to the web — on Mac and PC. And thanks to iCloud, your work is always up to date on all your devices based on the groundwork accomplished with Documents in the Cloud.

For those wishing to review the finer details and/or review Apple's 32 patent claims, see Apple's patent application 20130205251which was originally filed in Q3 2012.