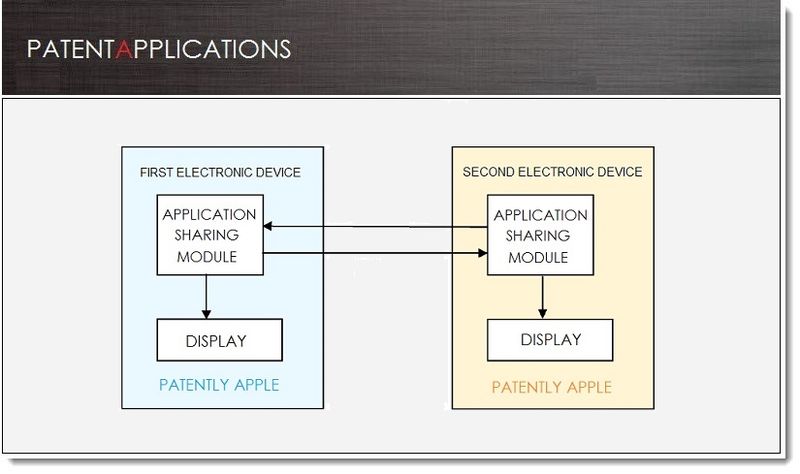 On August 1, 2013, the US Patent & Trademark Office published a patent application from Apple that reveals a real-time enterprise centric app-sharing feature for future FaceTime video conferences. Microsoft recently ran an ad mocking the iPad's inability to share apps during a video conference seamlessly. Apple's latest invention effortlessly answers that void and goes far beyond by including a privacy information mode and more.

The explosion of computing has profoundly affected the lives of nearly every person. Computers have become ever more common, inexpensive and small. Today, many people carry portable computing devices--mobile phones, tablet computers, personal digital assistants, and the like--that are far more powerful and versatile than most computers were twenty years ago.

This portability and pervasiveness has led to shifts in the way we accumulate, experience and share information. On average, people are today far more accessible and in touch than in years past. In many cases, this high degree of connectedness between people is now expected.

As part of forming connections with others, people naturally share information about themselves, their interests, their activities, and so on. Information sharing has, in many ways, become a primary means to staying in touch with friends, family and colleagues, as well as forming bonds with new people.

Information sharing is also very common in businesses. Employees often need to share information with one another or their organization to ensure continued business success. More efficient sharing can create a competitive advantage in the marketplace.

Portable computing devices facilitate this type of information sharing but are not perfect. Many times, information must be transformed before it can be shared. For example, drafts of documents might be emailed from one worker to another rather than shared directly in the context of a commonly-used application. Barriers to information sharing cause added complexity, cost time and disconnect people from one another.

Thus, what is needed is an improved way to interactively share applications and their data. 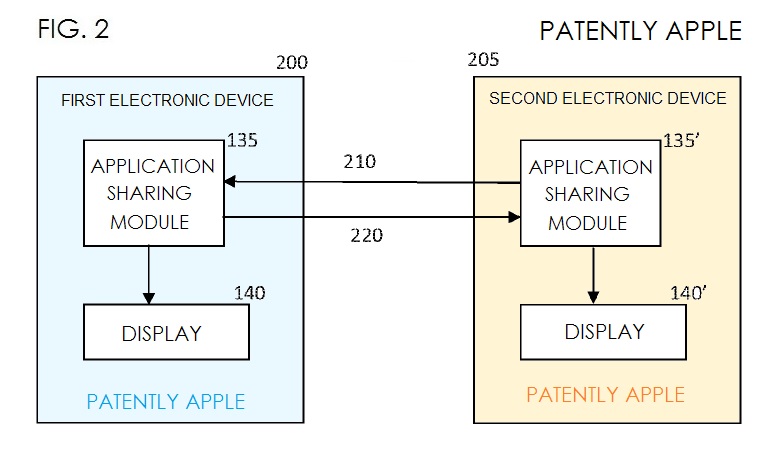 The user interface may include a plurality of menu options (buttons, sliders, lists, and the like) that permit a user to access and control certain functionality. As functionality is chosen, the processor may vary the application sharing permissions, such as privacy designators, to match the user's selections. These permissions may be stored in the storage of the device and accessed during any application sharing session.

Users may designate certain application data to be private, thereby affecting the way in which it is shared (or not shared) with other users through the interactive application. Private data may not be shared at all, or may be shared in such a fashion that particular information is obscured, left out or otherwise restricted. 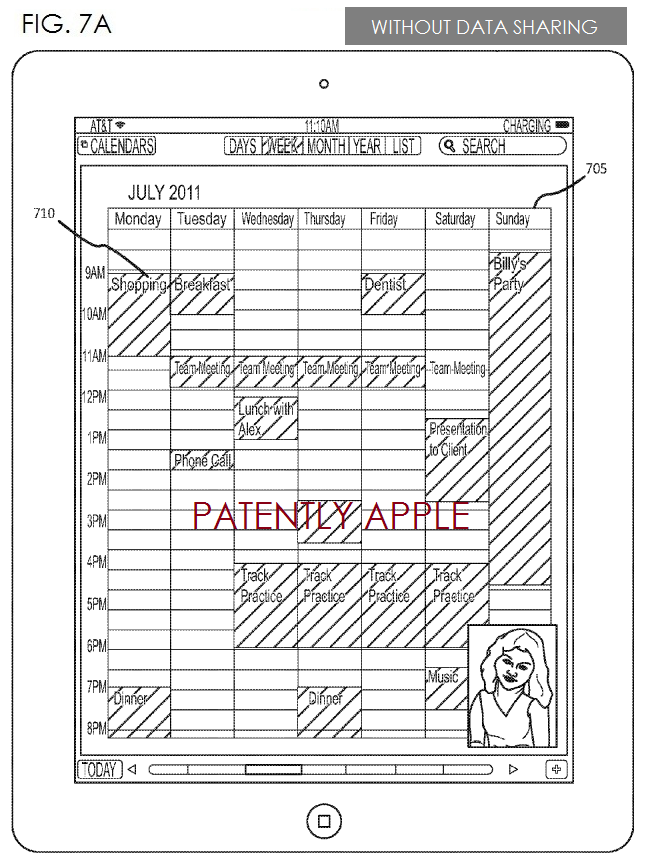 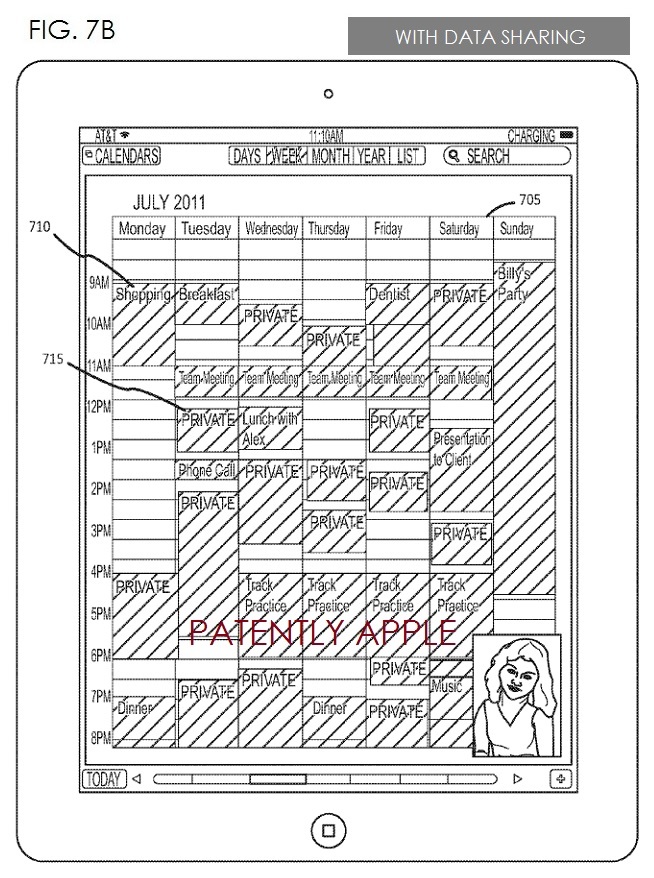 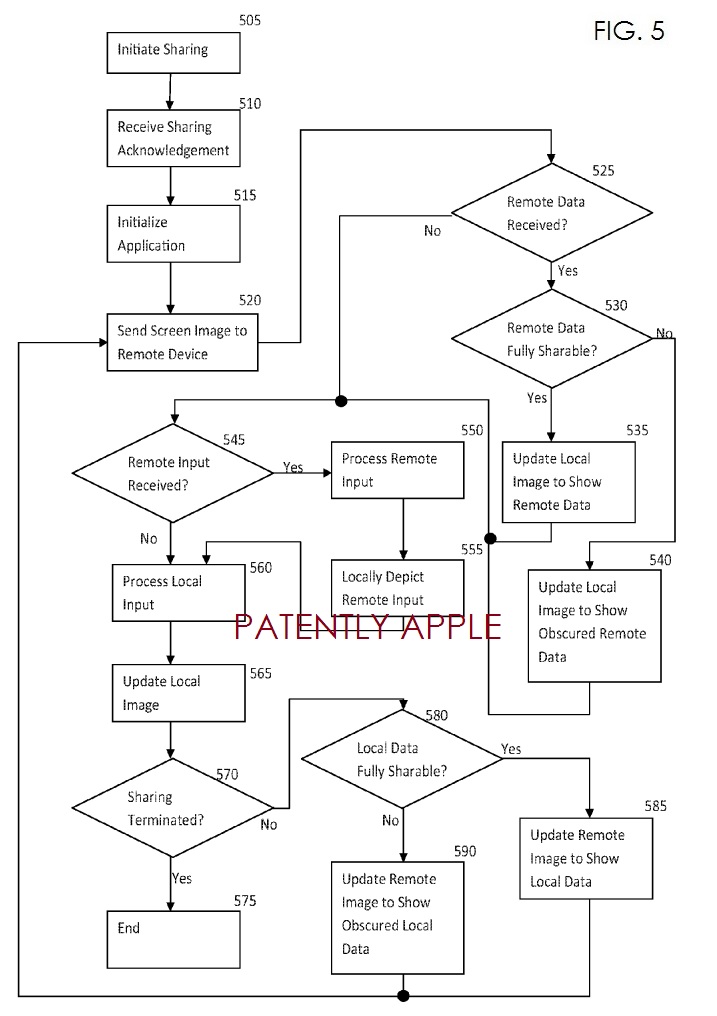 Apple states that various embodiments may include or incorporate specialized user interface elements to reflect user input and application data in an application sharing environment. For example, user inputs may be shared between electronic devices; remote user inputs may be graphically shown on a local device so that both users are aware of the others' inputs.

One example of a specialized graphical element representing a remote input is shown below in patent FIG. 6. In this example, the dashed circle noted as #605 represents a remote user touching, selecting or otherwise interacting with the shared application, through the second electronic device at the point marked by the circle. Because the local user cannot see the remote user's touch or other input mechanism, the first electronic device creates and displays the circle to provide visual feedback to the first user of the second user's interaction.

Apple's patent FIG. 6 is an example of a parent on a business trip taking the time to read a bedtime story to their child over a FaceTime conference. The parent is able to interact with the shared application of an iBook by turning the pages of the book remotely. 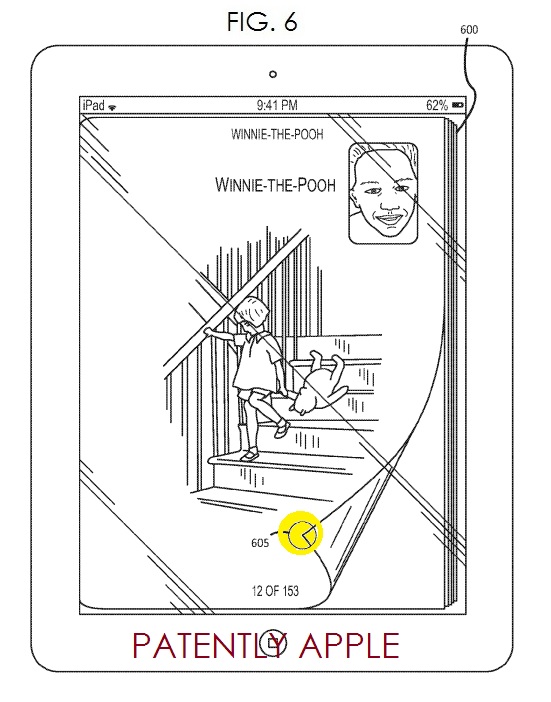 The specialized graphical elements may indicate not only a remote user's points of input, but also which portions or functions of an application are remotely controlled and thus unavailable or "locked out" to a local user of an electronic device.

It may be useful to permit only a single user to interact with certain aspects, portions, features and/or segments of an application, thereby preventing conflicting inputs from multiple users or struggles between two instances of a shared application fighting for control.

Previewing a Matrix of Apps that could be Shared

A user may select one of the applications from the list to share with the remote electronic device. When the application is selected, it may expand to fill the entirety of the display while the video conference image is reduced in size and overlaid on the application. 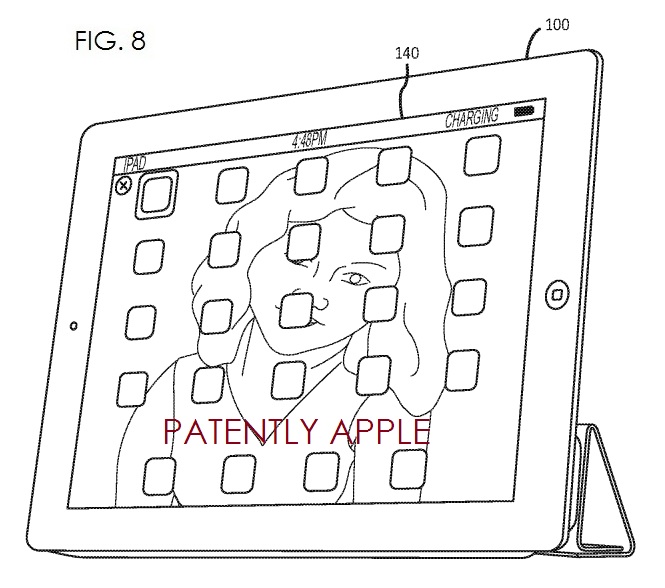 Typically, though not necessarily, an embodiment may force an interactively shared application into a full-screen display mode on the first and second electronic devices. Given the relatively small display real estate on many portable devices, maintaining the application in a full-screen mode may enhance viewability and sharing functionality.

Apple states that application sharing will be available for the iPhone, iPad, Macs and digital camera.

Apple credits Brandon Kieft and Catherine Grevet as the inventors of patent application 20130194374 which was originally filed in Q1 2012.

It should be noted that the US Patent and Trademark Office did in fact publish a series of older continuation patents today dating back to between 2006 and 2010. The continuation patents listed below are specifically referenced as such under the section titled "Cross-Reference to Related Applications."

Generally speaking, this type of patent application contains modifications that Apple's legal team have made to the original patent claims in an effort to have the US Patent Office finally approve their invention. In general continuation patents don't represent any new developments from the original patent filing.