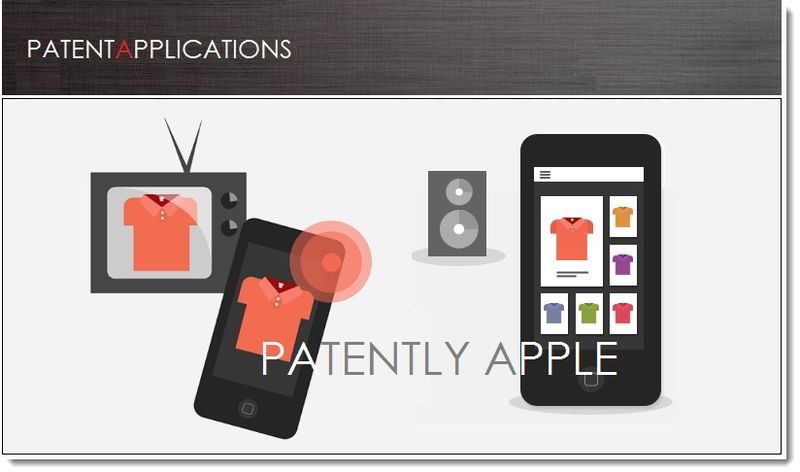 On August 8, 2013, the US Patent & Trademark Office published a patent application from Apple that reveals a very interesting future application that involves the building of audible or inaudible audio hyperlinks into an app that could be played back on podcasts, TV shows or as an in-store sale carried over in-store speakers. It could be a message sent directly to your iPhone by a band at a concert notifying you that there's a special deal on music or promotional items because you attended their concert. The inaudible hyperlink is triggered at some point in an audible or inaudible message that's broadcasted. It's easy to see that there's a lot of potential for this type of future application.


Apple states that hyperlinking has typically been limited to textual documents, including web pages, and providing a way to allow hyperlinking of non-textual material would be useful. For example, many podcast programs identify other resources that might be of interest to the listener, such as other podcasts or web material, there is currently no way for a podcast to provide a hyperlink to such other resources in the audio content of the podcast.

The linked material may be other audio content, but may also be any other type of desired content that may be accessible by the system processing the audio stream.

As with hypertext systems, an audio hyperlinking system employs hyperlink information encoded into the audio stream that can be used by an electronic device to identify, access, and perform linked resources.

Apple's patent FIG. 1 is a pair of audio waveforms, illustrating linking from one audio stream to another. 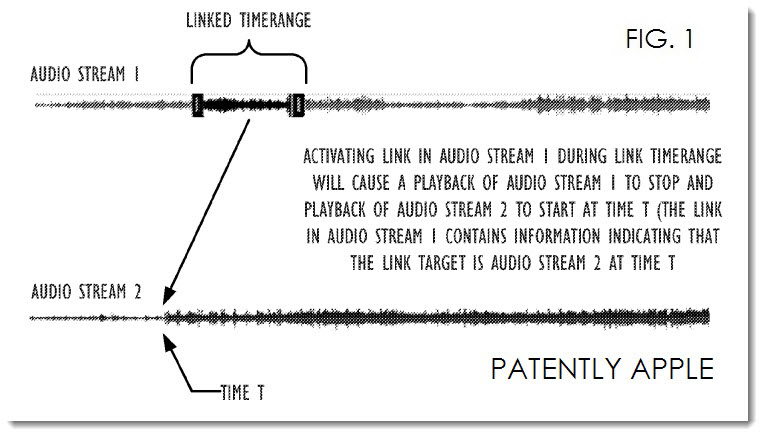 In one embodiment, a button, such as a button on a headset normally used for accepting a call, may be double-clicked to indicate that a hyperlink should be traversed, and triple-clicked (or single clicked) to indicate a return to the original audio stream.

In yet another embodiment, a user interface may provide controls for hyperlink traversal that are normally not displayed, but are displayed upon activation of another control. For example, on a smartphone, double-clicking on a Home button may cause display of the hyperlink user interface.

Under "Encoding the Hyperlink" section of Apple's patent they state that "Either or both of the hyperlink indicator and hyperlink information may be encoded in the audio stream to be audible to a listener or to be inaudible.

An application already using similar technology can be downloaded from the App Store today. On Sonic Notify's webpage we see in step three noted below that the "inaudible signal" can be played over speakers in stores, on TV, and at live events.

The apps that use an integrated inaudible signal and played over speakers on TV, concerts or in stores are able to trigger iPhone actions, be it delivering an ad, information about an in-store/Apple Store special or information relating to a movie or TV show. It may even one day trigger your iPhone to interact with a TV show like "The Voice," for voting for an artist or purchasing a Tune of the artist on iTunes. This could be a great feature for a future Apple HDTV.

To review specific details of this invention, see Apple's patent application 20130204413 which was originally filed for in Q1 2012.

C'mon James. You know that technology changes. Microsoft's tablets never went anywhere in the 90's but Apple's refinements made it a smash hit. Cavemen had nice dining room tables made of rock. But does that matter?

Really? Some 20 year old device that only you could recall didn't take off because it was half baked and you think that it's relevant today against Apple's modern invention? Now that's really funny, James.

I recall nearly the exact thing used back in the 90s. Didn't exactly take off - it was an audible dial-up modem sort of noise, there was windows software to detect the noise and of course you had to have a microphone plugged into your computer and near enough to the TV. Some internet show used it relatively discretely to load pages on what they were showing, akin to broadcasting DTMF tones to get phones to dial a number.

This is genius. Really. Thanks for finding this!