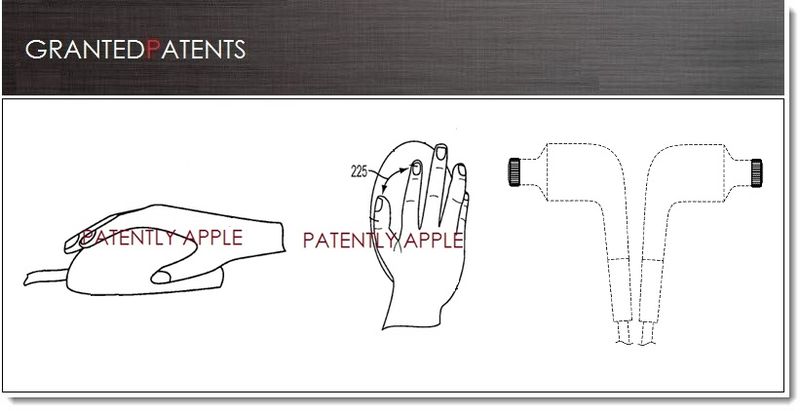 The US Patent and Trademark Office officially published a series of 41 newly granted patents for Apple Inc. today. In our summary report we highlight five interesting patents, illustrate a number of design patents and provide you with a comprehensive list of the remaining patents that were published today.

Apple has been granted a patent today for their invention that generally relates to deletion gestures on portable electronic devices with touch screen displays, and more particularly, to processes for deleting listed items that involve multiple gestures by a user on different parts of the touch screen. 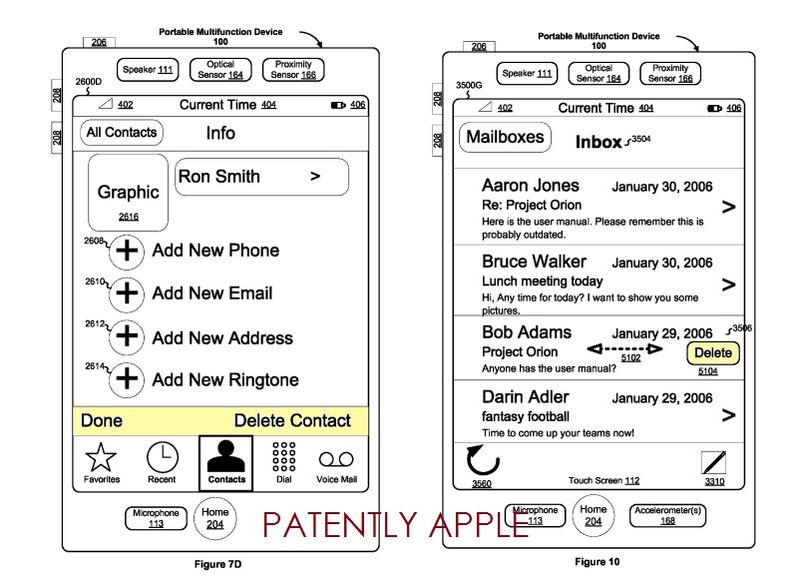 Apple credits Scott Forstall, Greg Christie, Stephen Lemay, Bas Ording and Marcel Van Os as the inventors of this granted patent 8,504,947 which was filed in Q2 2011, though was originally granted in 2007.

Apple has been granted a patent today for their invention relating to Expose, a feature invented in-part by the late Steve Jobs. The video presented below shows Steve Jobs introducing this one-time OS X feature back in 2010.

Expose is a feature that many Macites loved and they complained bitterly when it was removed. Expose was described in Apple's patent as a computer-human interface which manages the available space of a computer display in a manner which reduces clutter and confusion caused by multiple open windows. The interface includes a user-selectable mode of operation in which only those windows associated with the currently active task are displayed on the computer monitor. All other windows relating to non-active tasks are minimized by reducing them in size or replacing them with a representative symbol, such as an icon, so that they occupy a minimal amount of space on the monitor's screen.

Apple credits the late CEO Steve Jobs and Donald Lindsay as the inventors of granted patent 8,504,937 which was originally filed in Q1 2005 and published today by the US Patent and Trademark Office. To review today's 36 granted patent claims and details, see Apple's patent.

Apple Granted Patent for Projector Built into a MacBook, iPhone or iPad

Apple has been granted a patent today for their invention relating to light display systems such as projectors. The projectors could be manufactured having lower power consumption, reduced speckling, and/or that are less expensive than conventional light projectors.

Apple's patent FIG. 2 noted below illustrates a projector (patent point #105) integrated into a MacBook. Apple further notes that projectors could one day be built into other portables such as an iPhone or iPad.

Apple credits Brett Bilbrey as the sole inventor of granted patent 8,502,926 which was originally filed in Q3 2009 and published today by the US Patent and Trademark Office. To review today's granted patent with 8 claims and details, see Apple's patent. 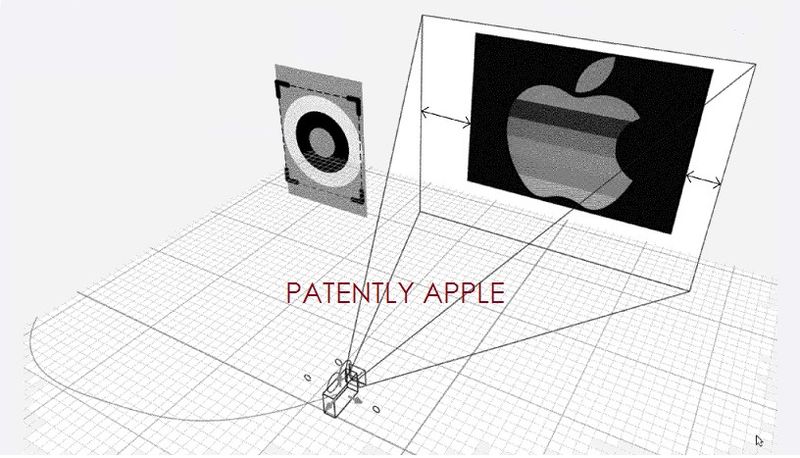 Apple Granted a Patent for the Magic Mouse

Apple was previously granted design patents for the Magic Mouse back in December 2011 and again in March 2013. Apple's third granted patent, which covers 30 patent claims, was granted today.

Apple credits Wayne Westerman and Rico Zorkendorfer as the inventors of patent 8,502,785 which was originally filed in Q4 2008. To review Apple's full patent details and legal claims, see Apple's patent.

Apple was granted five design patents today covering one version of the Siri user interface, a microphone icon, an older design of earphone, a font (not shown) and one for a mystery design shown at the bottom center. If you happen to know what the mystery design relates to, please send us a note in our comment area. 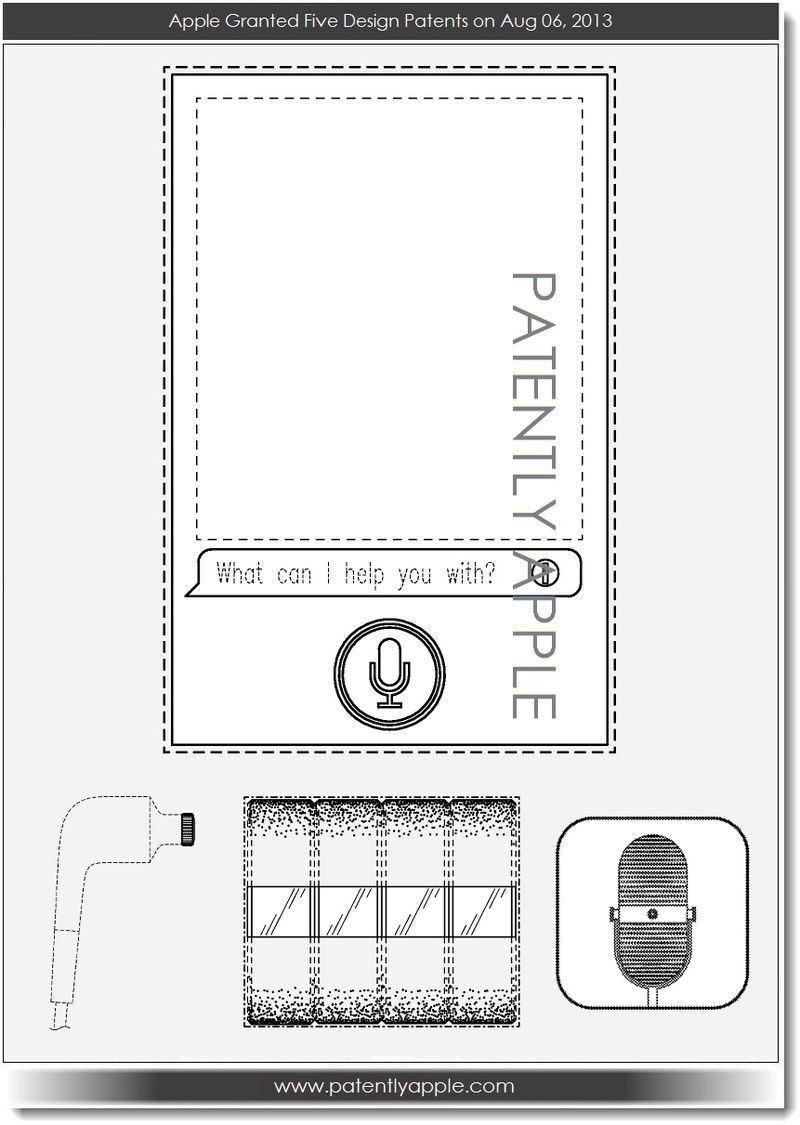 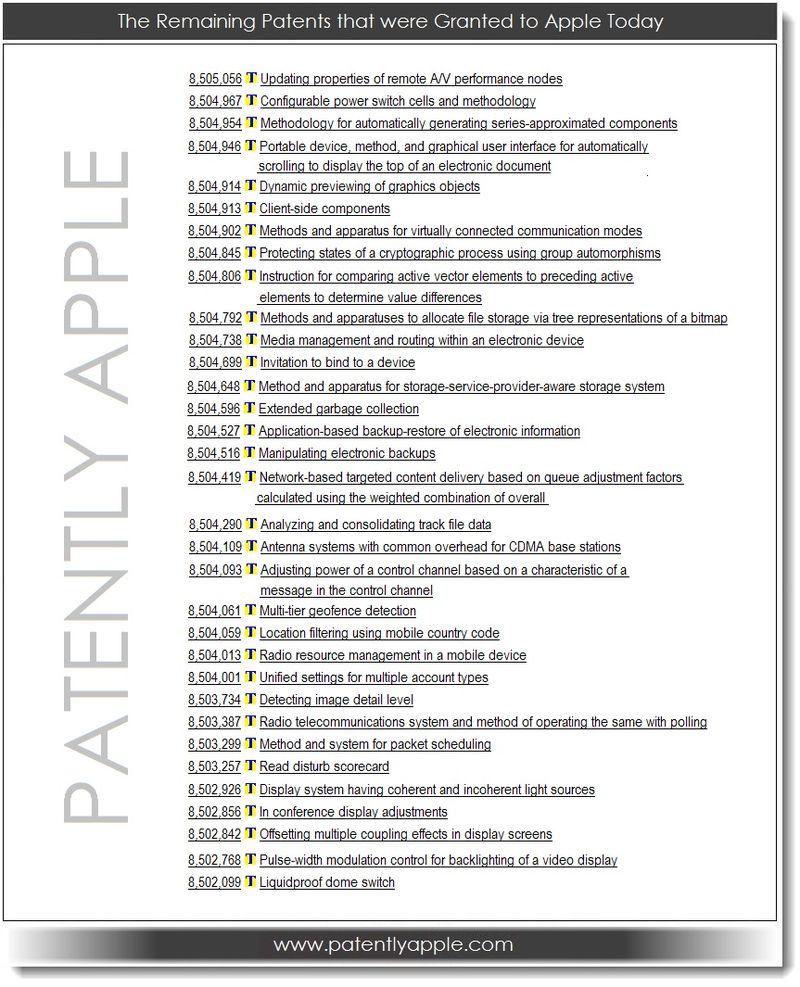 I would agree to this. It looks like the "cylindrical" style scroll wheel to me.

Expose is a solution that NeXTSTEP had built-in.

Never had a problem with NeXTSTEP window clutter. Hold the command key and double-click the active icon and all windows hide, except the App windows you want. Switch seemlessly between apps.

Expose is a mouse driven only solution to a problem better solved in NeXTSTEP.

For the requested inputs on "one for a mystery design shown at the bottom center. If you happen to know what the mystery design relates to, please send us a note in our comment area",

I think this is a wheelbased HMI that we see for example in the Clock App in iOS (ex. While setting time, hh, mm AM/PM)

It looks like the date scroll wheel to me.