On August 01, 2013, the US Patent & Trademark Office published a series of 20 original patent applications from Apple Inc. In this report we touch on Apple's newly designed Ultrasonic Bonding machine to improve future printed circuit board manufacturing as well as an OLED patent that's about improving the quality of this type of display that Tim Cook and company currently sneer at. Our report also provides you a list of twelve links to other patent applications that were published today covering a wide array of technologies including "context-based reverse geocoding" and technology related to LTE-Advanced which is the next wireless standard that Apple will be adopting for the iPhone either this fall or sometime next year.

You know Jony; he loves new toys that could make future devices better, even if we're not aware of the little tweaks made in the manufacturing process. Apple's latest process related patent covers a newly invented manufacturing tool capable of adhering the wires to the PCB pad in a reliable, repeatable way at a lower overall cost, without the need for volatile adhesives. 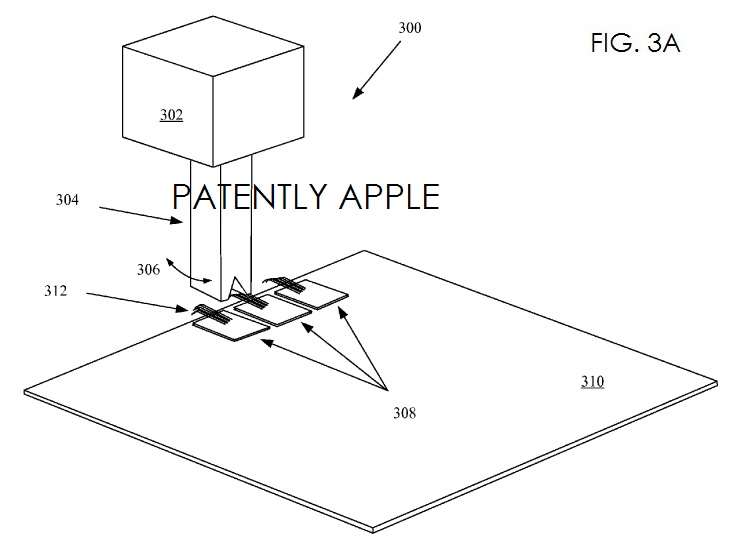 Apple's patent FIG. 3A noted above shows a perspective view of an ultrasonic welder. If this type of invention interests you, then check out Apple's patent application 20130193193.

Apple's CEO Tim Cook is on record as saying that he doesn't like OLED display quality. Cook, speaking at an investor conference hosted by Goldman Sachs in San Francisco in February, called the color saturation of OLED (organic light-emitting diode) displays "awful."

"If you ever buy anything online and really want to know what he color is, as many people do, you should really think twice before you depend on the color from an OLED display," Cook said.

Yet behind the scenes Apple filed for a patent about improving OLED quality. Why does it matter? Because one the strengths of OLED display is that they're superior for certain types of products requiring a flexible display such as Apple's invented wristband or iWatch.

Apple states in their patent that "because each OLED may emit its own colored light, OLED displays may be thinner and lighter than displays requiring a backlight. OLEDs may also be desirable because they may be fabricated on flexible or rigid substrates. OLED displays may also allow better viewing angles and better color than some liquid crystal displays (LCDs)."

Apple states that their invention generally relates to OLED displays and methods to adjust OLED displays to maintain a desired appearance.

Apple states that Photodetectors may be disposed in the OLED display with individual OLEDs or zones of OLEDs to adjust their emitted light. In an embodiment, each photodetector may detect light incident to the display. Such detected light may be from OLEDs of the display, from the ambient light, or both. Ambient light may affect how the light emitted from the display is perceived. 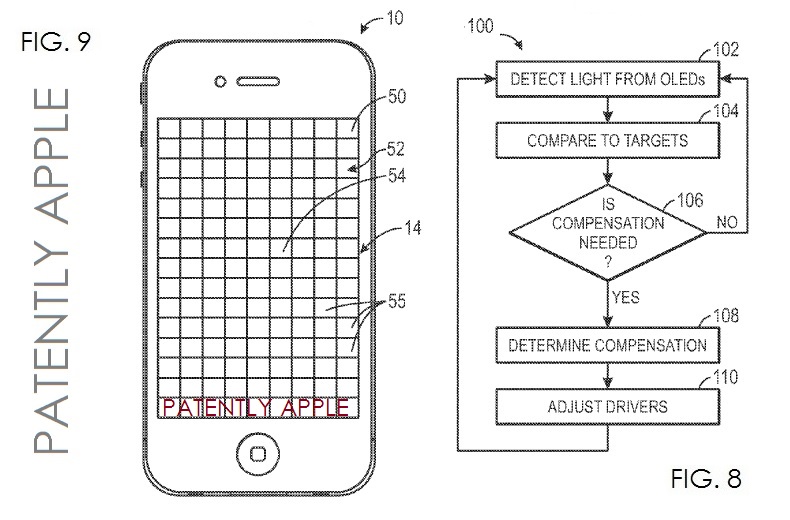 Apple's patent FIG. 8 depicts a flowchart of a method for operating an OLED display to compensate for aging OLEDs; FIG. 9 is a front view of zones across the display of a handheld device. If this invention interests you, then check out patent application 20130194199.

Some of the Other Apple Patent Applications Published Today

20130195218: Methods and Apparatus for Intelligent Scrambling of Control Symbols

Apple patent FIG. 4 of the '211 patent illustrates converting a grayscale image to an edge-detected image.