The Perfect Storm: All Eyes are on Apple's Strategy for China

During Apple's F3Q 2013 Conference call on Tuesday Tim Cook tried to explain away Apple's decline in China this past quarter as being attributed to Hong Kong being "an international shopping haven." That was the only reasoning given for a 20% decline in iPhone sales in Hong Kong. Cook later resigned to saying that he wouldn't get discouraged over a 90-day cycle that could have economic factors and other things in it. For being a statistics man, his response was a little vague if not odd.

The Top 10 Smartphone Shipments statistics published by TrendForce just prior to Apple's conference call clearly shows us another side of the story. It shows us that Apple's Chinese competitors are quickly gaining ground. Chinese OEMs Huawei, Lenovo, Coolpad and ZTE all gained ground in China without mention of a problem in the Hong Kong market. According to TrendForce's report, Chinese branded smartphone shipments have risen 44% compared to the numbers in 2012. 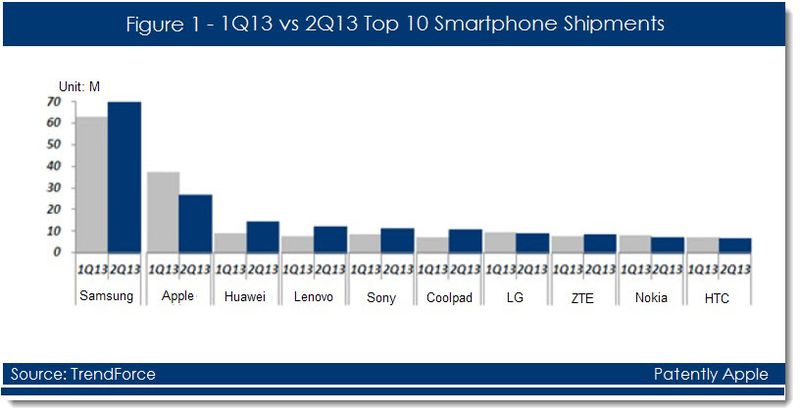 The TrendForce chart clearly shows that everyone but Apple grew their smartphone business last quarter.

It's All About China

Patently Apple reported on this current trend ahead of the pack back in May. The trend indicated that 55% of the Chinese phone market was for entry-level phones. At that time we also noted that larger 5 inch smartphone display models were on target to grow 16%.

In one of Bloomberg's Friday reports on this subject matter they quoted Neil Mawston, executive director at Strategy Analytics as stating that the current iPhone is under-performing and Apple is at risk of being trapped in a pincer movement between rival 3 inch lower end and 5 inch higher-end Android models.

Apple appears to be drifting into the perfect storm and to maneuver their way out of this is going to take a CEO with a steady plan to overcome the odds of being crushed in China. All eyes are on Apple's strategy in China.

In early January we were one of the first sites to report on a supply chain rumor that Apple was working on a new iPhone aimed at emerging markets. In that same report we also asked the question whether Apple would be joining the larger display trend. Both of these points are now pressing on Apple from every quarter.

In December 2012 we pointed to Apple secretly working with China Mobile and in early January China Mobile all but admitted to working with Apple but was barred from further details due to a confidentiality agreement with Apple. Cook also revealed that they would triple their Apple Store footprint in China over the next two years. During Apple's F3Q conference call, Cook toned down that forecast to double the stores in that same time frame.

Yes, all eyes are on Apple's strategy in China; even though much of it has already leaked out throughout the first half of the year. What it's really about now is how Apple intends to perfectly execute their plan in a way that could exact a Shock and Awe effect in China.

The simple announcement of iPhones being available on China Mobile's network will erase most doubt in the market about iPhones growth prospects in a flash. Combining that with a new entry-like mid-range iPhone model will spark a huge boost in sales with Chinese consumers.

The Mystery of the Next iPhone

The last punch in their knock out strategy will rely on Apple's next premium iPhone. It has to retake the higher ground away from Samsung that surprised the market with the leap to a 5 inch display last fall which most of the world applauded. So what the next iPhone delivers is paramount. And we can only speculate on what it could be. Will Apple adopt a larger display in the 4.7 to 5.2 inch range? Will they use a flexible display? Will they use another material like liquid metal? Will they introduce their iWallet with fingerprint sensor? Yes, the wait is killing us. What will Apple deliver this time around? It's the one part of their strategy that we're all still in the dark about and yet we know that Apple has to raise the bar high enough to send their competitors into chaos trying to copy it.

Apple's CEO Tim Cook told Walt Mossberg during his D11 Conference interview this year that the public loved surprises. Yes Tim, we do and hope to hell that the next iPhone will blow us away and take this device to a whole new level. Yet in context, it will be Apple's total strategy including China that the market will want to see answered at this event.

This is a perfect storm brewing and what comes out of Apple's next special September iPhone event will either deliver the rush of success or disappointment of defeat. C'mon Cook, show the world what Apple is really made of. Show us once again that the Crazy Ones in Cupertino can still rise to the occasion under pressure. Show us the team that Steve Jobs created still has the wherewithal to deliver a masterpiece once again. Apple has already given us a glimpse of what the Crazy Ones are capable of with their next generation Mac Pro; now let's see it duplicated where it counts most: on the iPhone.