At the beginning of the month, HP's Asian Pacific senior director of consumer PC and media tablets stated that HP is looking to re-enter the smartphone race and is working on launching a new device which will offer a "differentiated experience" to consumers. While we're not privy to what "differentiated experience" their smartphone will bring, their engineering team have indeed provided us with a clue about a possible associated product that has a powerful twist. If HP could pull it off just right, their smartphone project could be an interesting entry into the market when it arrives.

HP has come up with a nice simple idea for a future notebook or Ultrabook that will come with a built-in docking solution that could be positioned to replace the keyboard's numeric pad space. The design will provide a recessed space for docking a future HP smartphone. Of course the smartphone will have to be a fairly thin design if this is to be received as a "cool" idea. The all-day battery in the Ultrabook will be able to power a busy executive for the whole day and keep their smartphone charged at the same time.

It should be noted that HP's patent figure below is a patent application concept and not a design patent. So HP could theoretically place the smartphone dock anywhere within the notebook space such as replacing the traditional notebook trackpad. The smartphone's multitouch display could double as a trackpad. So the patent figure is just a concept just as the illustrated smartphone is – which could change in the final product.

Today, Wintel is pushing the next generation Ultrabook Detachable or Convertible as a 2 for 1 computing deal. Their thinking is that it's a tablet when you want it and a notebook when you need it. HP may be thinking of extending that idea to the next level.

Think about it. Why would HP be introducing a smartphone dock into a notebook when third party smartphone sizes are ever changing? 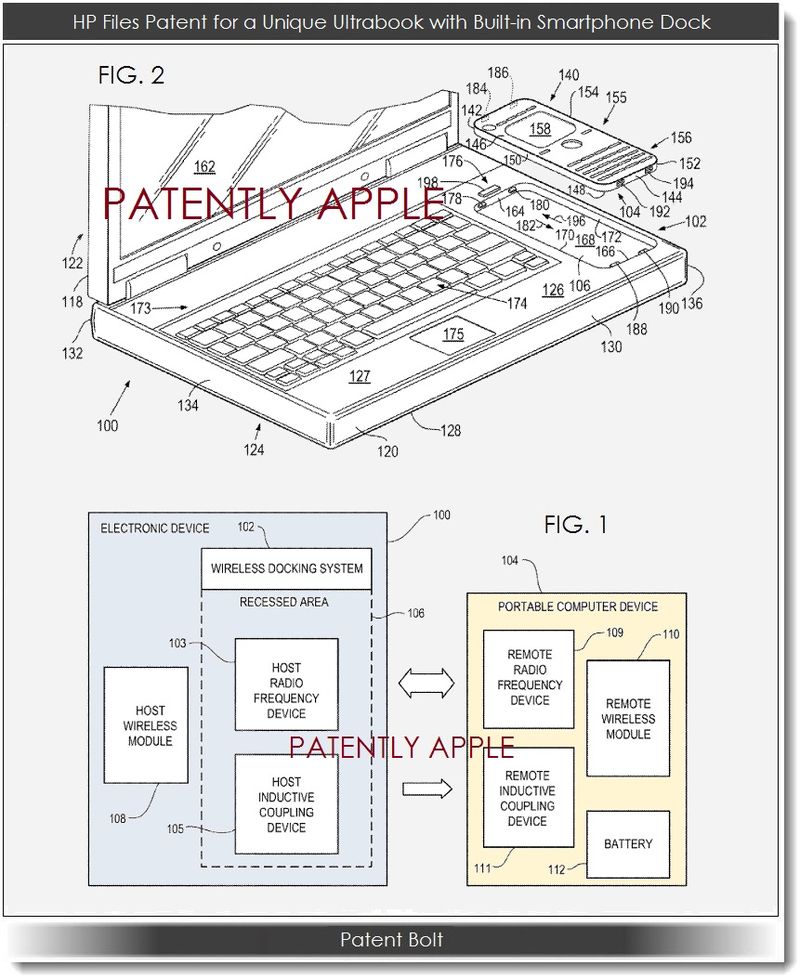 The twist is that HP is likely thinking of introducing a new hybrid notebook solution to the mix that would include a new HP smartphone as an all in one package in a 3 for 1 computer deal. The phone would perfectly fit into the dock and it could be priced whereby the phone would almost be free.

Secondly, all 3 devices would be powered by Windows and all conveniently synced and hassle free for the consumer right out of the box. What if they sell this 3-in-1 hybrid for the price of one iPad? Depending on the price points, HP would be able to cater to all three layers of the market (high, medium and low) by differentiating how smart their phone really is. 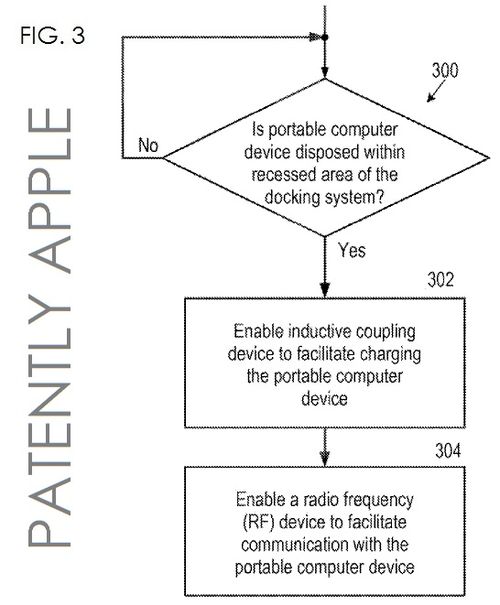 In 2007, Steve Jobs introduced the iPhone by saying that Apple's new device was an iPod, a Phone and an Internet Communicator. He repeated that message two or three times to make the point that Apple's new iPhone was in fact a highly sophisticated hybrid product. So combining certain products sometimes makes sense, even to Apple's late CEO Steve Jobs.

Sometimes combining certain products isn't confusing, isn't compromising and in the end is just a smart solution. The combination of products is what made the iPhone a smartphone at a time when most smartphones were really dumb. That's how Steve Jobs sold the iPhone.

Yet when Apple doesn't' want to compromise, for a million reasons we won't go into in this report, the combination of products simply becomes downright confusing, like mixing a toaster and a refrigerator. Yet on the flipside, some high level executive at Apple gave the okay to their engineering teams to come up with a backup plan just in case the Hybrid Ultrabook ever takes off like the 7" tablet did that Apple once dissed.

The point being that politics or personal views aside, the next generation Ultrabooks with a detachable display doubling as a tablet does make sense to many in the market and we'll see how well it takes off and over the next few years as people upgrade their older notebooks. Now add a possible smartphone dock into the mix and you may have a twist that provides yet another level of convenience to the new hybrid notebook segment.

HP Points out a Few Conveniences

This makes sense if you have a Windows OS notebook and Windows on an HP smartphone. This one OS solution may offer a compelling solution to enterprise users and IT departments handling security. So while it might not make sense to Apple's CEO, there's a business case for this kind of hybrid business tool going forward.

Additionally, HP makes the point that the communication link between the devices may allow the user to establish a phone call using resources of the notebook such as a microphone and speakers, and possibly use the screen and webcam for better video conferences.

And finally, being able to speak on the phone without the need of a headset while you're typing away on a document that you have a deadline to meet could be very convenient – especially if it's a video call that you could set up to show in the corner of the same screen you're working on at the moment. It's also easier to share documents in a conference call with this configuration.

For now it's just an idea on paper. Yet considering that it was an HP executive who opened the door to a new differentiated "device," to begin with, HP's new patent may in fact be providing us with one of several key ideas that HP could be considering to bring to market in the not-too-distant future. It's definitely an extension of their public statement.

I fully understand that this kind of product just adds another layer to Tim Cook's confusion, but HP's new idea has its place in a market where consumers and businesses are still trying to figure out what mobile solution works for them at home, in the office and on the go. It's an idea that not for everyone, but it could definitely find a distinct market niche around the globe. For the enterprise it's one device serving several computing needs at one price from one vendor that just happens to have one of the best corporate cloud solutions on the planet.

At the end of the day, sometimes hybrid solutions work and sometimes they don't. Could HP's new idea fly in this ever shifting mobile device market? Definitely, but it could equally die as quickly as Apple's hybrid solution, the defunct Boombox.

What about connecting an iPad or an iPhone directly to a Mac or PC via the Lightening connector?

This would offer more reliable and faster (USB 2) charging and data exchange between the iDevice and the computer.

I suspect that in the near future, Apple will announce USB 3 support for the Lightning interface -- this will increase the data transfer rate 10 fold, and the charging rate 9 fold.

With the accelerated rates, an USB 3/Lightning iPad or iPhone would be an extremely capable I/O device for a computer.

To answer your question:

Whether it's patentable, only time will tell.

I think if HP's former idiot of a CEO Leo Apotheker didn't kill WebOS 30 days after it's official release on products, they could have killed Android or at least stopped them from being number one. It was a crime that should have landed that CEO in jail instead of giving him a golden parachute. But that's a story for another day.

I think that Windows is the only viable solution in this scenario for sharing documents in the enterprise. Android can't handle legacy apps and WebOS has little to no following. Would I like to see WebOS resurrect? Yes, but it's not in the cards in the short term (if ever). Too bad.

Just wondering why you think HP would use the Microsoft OS and not implement the capable WebOS that they purchased from Palm?