According to the IDC's latest report, Apple posted its second-lowest year-over-year iPhone growth rate in almost four years as some buyers presumably held off on iPhone purchases in advance of an expected next-generation device launch this fall. Nonetheless, the 31.2 million iPhones Apple shipped last quarter was impressive as its flagship iPhone 5 model, which has been in the market for three quarters, was faced with additional global competition in the form of Samsung's Galaxy S4 and HTC's critically-acclaimed One models. 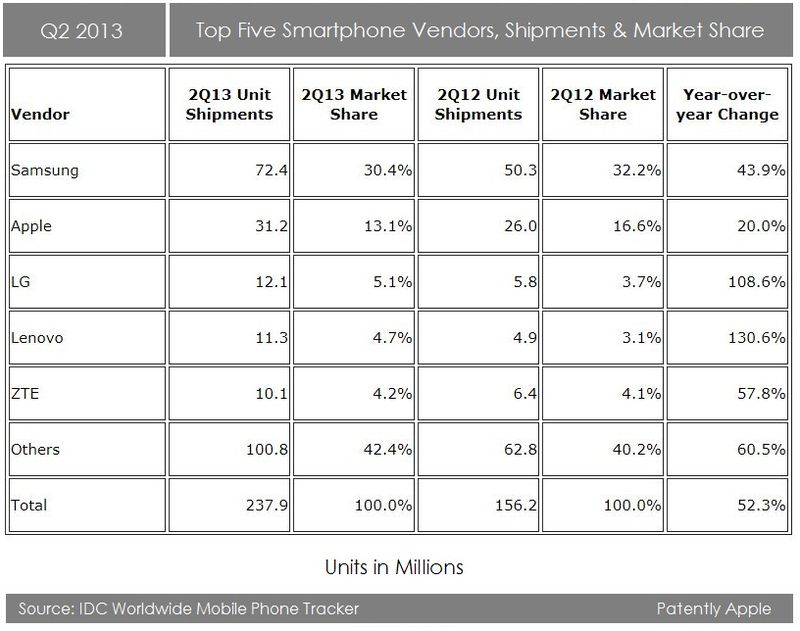 IDC's report further states that Apple's growth is likely to accelerate globally assuming it launches a lower-cost iPhone and continues to penetrate prepaid markets in the quarters to come.

IDC's statistics show that Apple increased their shipments year over year by 5.2 million units yet lost 3.5 percentage points in market share during that same time. In contrast, Samsung increased their shipments by 22 million units and gained close to 2 percentage points during that same time. LG grew 109% while Lenovo gained an impressive 131% during the quarter which put additional pressure on Apple.

ABI's senior analyst Michael Morgan stated in their report that "Despite concerns of premium tier smartphone saturation, both Samsung and Apple were able to deliver better than expected results in the second quarter."

The high end of the smartphone market continued to perform well in 2Q as Apple's iPhone and Samsung Galaxy S4 smartphones outpaced the overall market.

If the rumors of a mid-level iPhone materialize as expected, Apple will be able to significantly boost their market share over the next 18-24 months in an intelligent manner. Although profitability is far more important overall, market share plays a psychological role in the market that can't be denied.

Despite Samsung's lead with an army of models and price points to cover the entire spectrum of the market that looks good on paper, Samsung's Galaxy S4 sales miserably disappointed the market forcing Samsung to revise their quarter financials and lower Galaxy S4 expectations for Q3. And that's with Samsung spending 4.3 Billion on advertising last year to convince the world that they were number one in smartphones. Yes statistics count, but they don't always tell you the full story.

IDC Noted the Following: Data are preliminary and subject to change. Vendor Shipments are branded shipments and exclude OEM sales for all vendors.

With each statistic and headline of this samsung vs Apple parallelism, I'm reminded of the derivative Incrediboy (samsung) trying to match wits with the naturally and effortlessly superior Mr Incredible (Apple).