Apple Invents a Way to Restrict Interactions with a Touchscreen

On this holiday July fourth, the US Patent & Trademark Office published a patent application from Apple that reveals a method of restricting user interaction with a touchscreen. The invention could be used by teachers, parents or caregivers that require the ability to restrict access to specific functions of a device for a variety of reasons.

At times, it may be desirable to restrict interactions with the user interface of an electronic device. For example, a parent or teacher may want to disable certain icons on a touch screen, hardware buttons, sensors, and/or other parts of the user interface so that a young child can use a particular application on the device without accidentally accessing other applications and system functions or deleting files.

Similarly, a caregiver for a person with a cognitive impairment (e.g., autism) may want to restrict interaction with the device by disabling and/or hiding certain icons on a touch screen, hardware buttons, sensors, and/or other parts of the user interface that would distract the person with the cognitive impairment from the task at hand. As another example, a person may want to configure the device for a kiosk mode that restricts access to applications and system functions on the device. 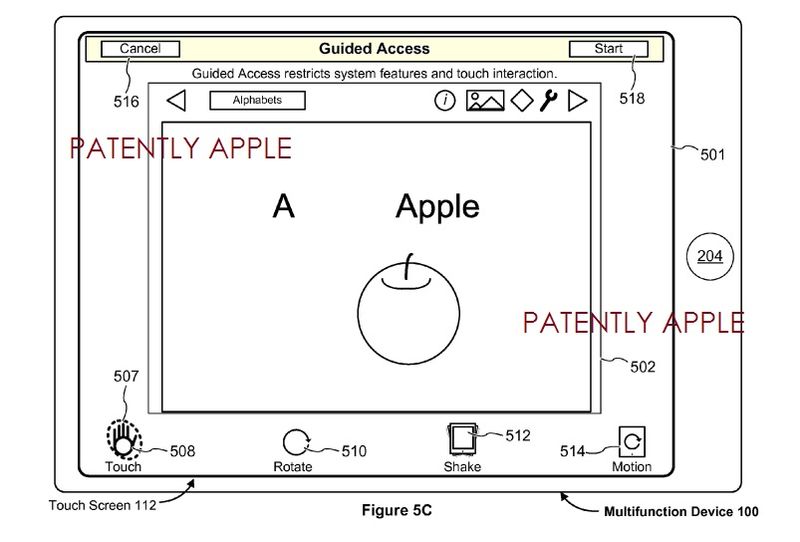 The Rotate Interaction Control user interface object # 510 causes the device to ignore rotation of the device while in the restricted interaction mode.

The Shake Interaction Control user interface object # 512 causes the device to ignore shaking of the device while in the restricted interaction mode.

The Motion Interaction Control user interface object # 514 causes the device to ignore movement of the device while in the restricted interaction mode.

Patently Apple wishes our US fan base a Happy Fourth of July Holiday. Cheers!