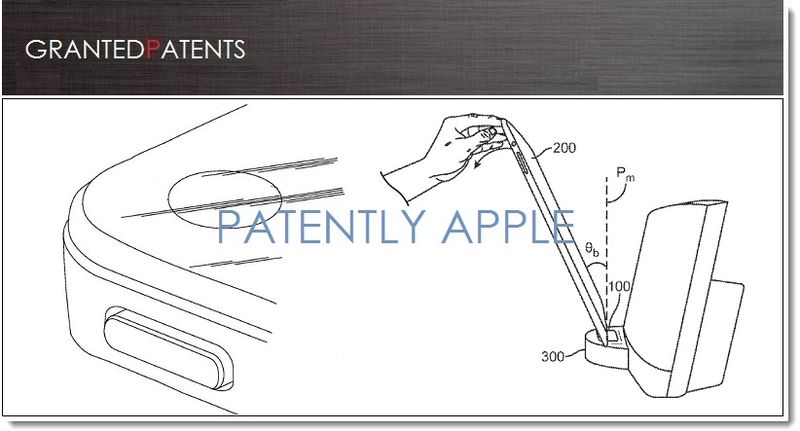 It's a huge day for Apple in respect to newly granted patents. The US Patent and Trademark Office officially published a series of 49 granted patents for Apple this morning. The patents cover a wide array of technologies such as Apple's lightning connector, the Mac mini, five camera patents and a few patents relating to the iPhone. We also provide you with two graphics from a recent European patent filing that illustrates the iPhone's face camera positioned in a new location. We close out our report illustrating five design patent wins for Apple and a full accounting of the patents that we didn't cover in today's report.

Apple has been granted a patent today for their invention relating to Apple's new lightning connector and Lightning to 30-pin adapter. The compliant mount may be used in a connection between a portable electronic device and another electronic device, such as a docking station as noted below. This is Apple's second granted patent on this technology that also covers bendable elastomers. Apple's first granted patent on this was published in May. 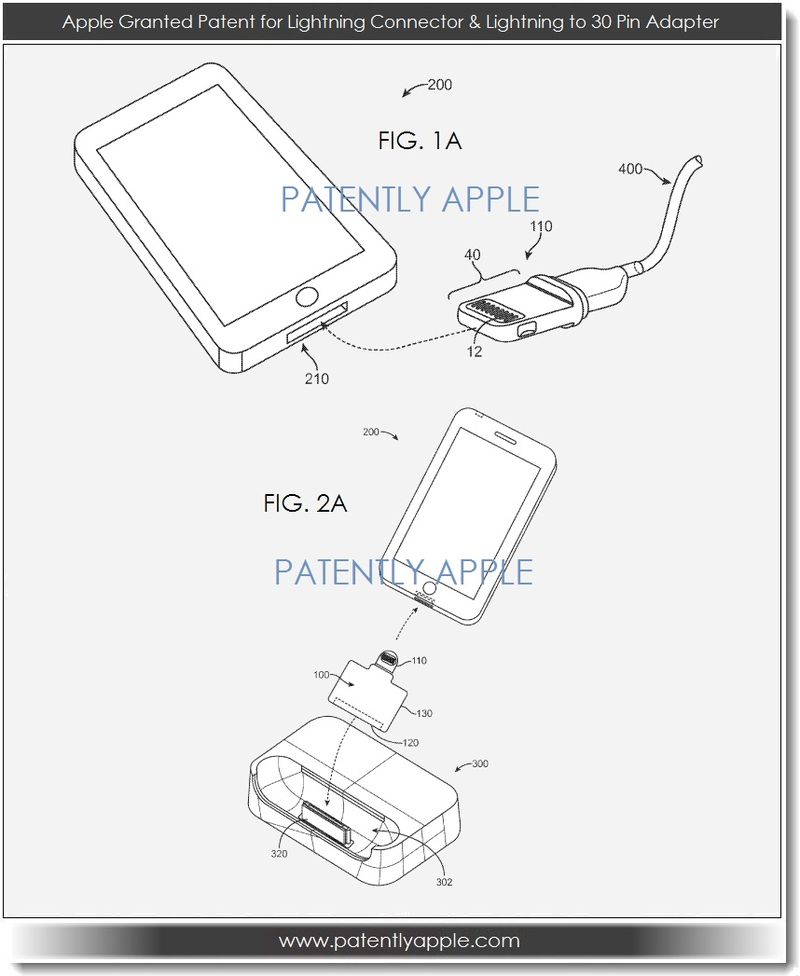 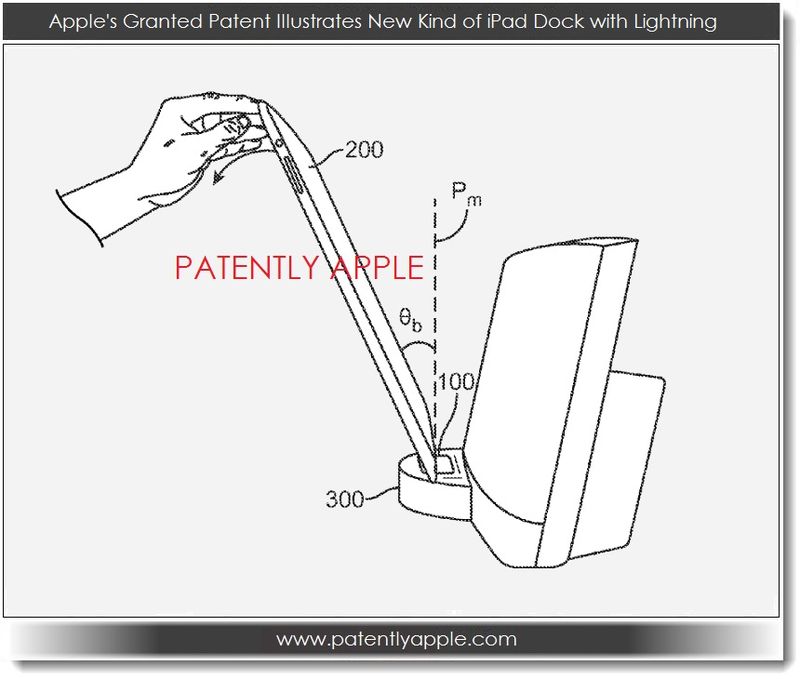 Apple credits Ian Colahan, Paul Thompson, and Michael Webb as the inventors of this granted patent which was originally filed in Q4 2012 shortly after the lightning connector was first introduced. To review today's 30 granted patent claims and details, see US Number 8,491,342.

Apple was granted a patent today for the Mac mini and its removable hard drive. Considering that Samsung was recently granted a design patent for a Mac mini-like device, it sure doesn't hurt to keep the patents coming should Apple need to sue the slavish copier in the future. 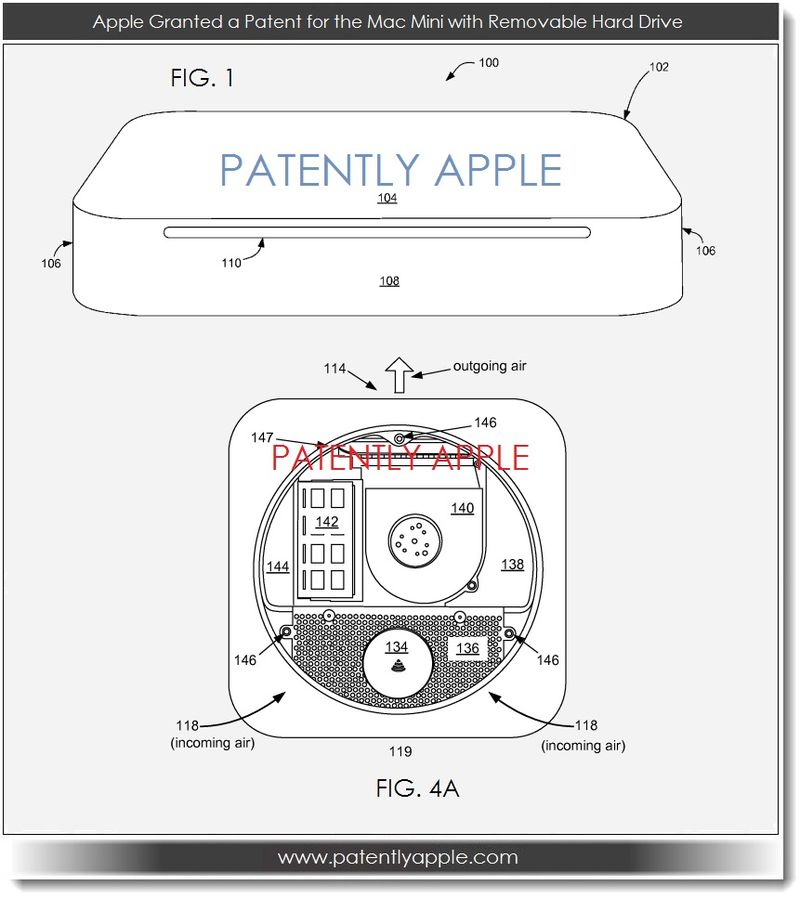 Apple credits Eric Knopf, David Tarkington and Houtan Farahani as the inventors of this granted patent which was originally filed in Q3 2010 and published today by the US Patent and Trademark Office. To review today's 19 granted patent claims and details, see US Number 8,493,727.

Apple has been granted a patent today for their invention related to providing a visual menu from a user's communications device to a communications device of a party that is placed on hold during a call. Why not entertain your friends, colleagues or customers with tailored content to view and/or listen to while you have them on hold. It's really a nice idea with a simple twist of original thinking. 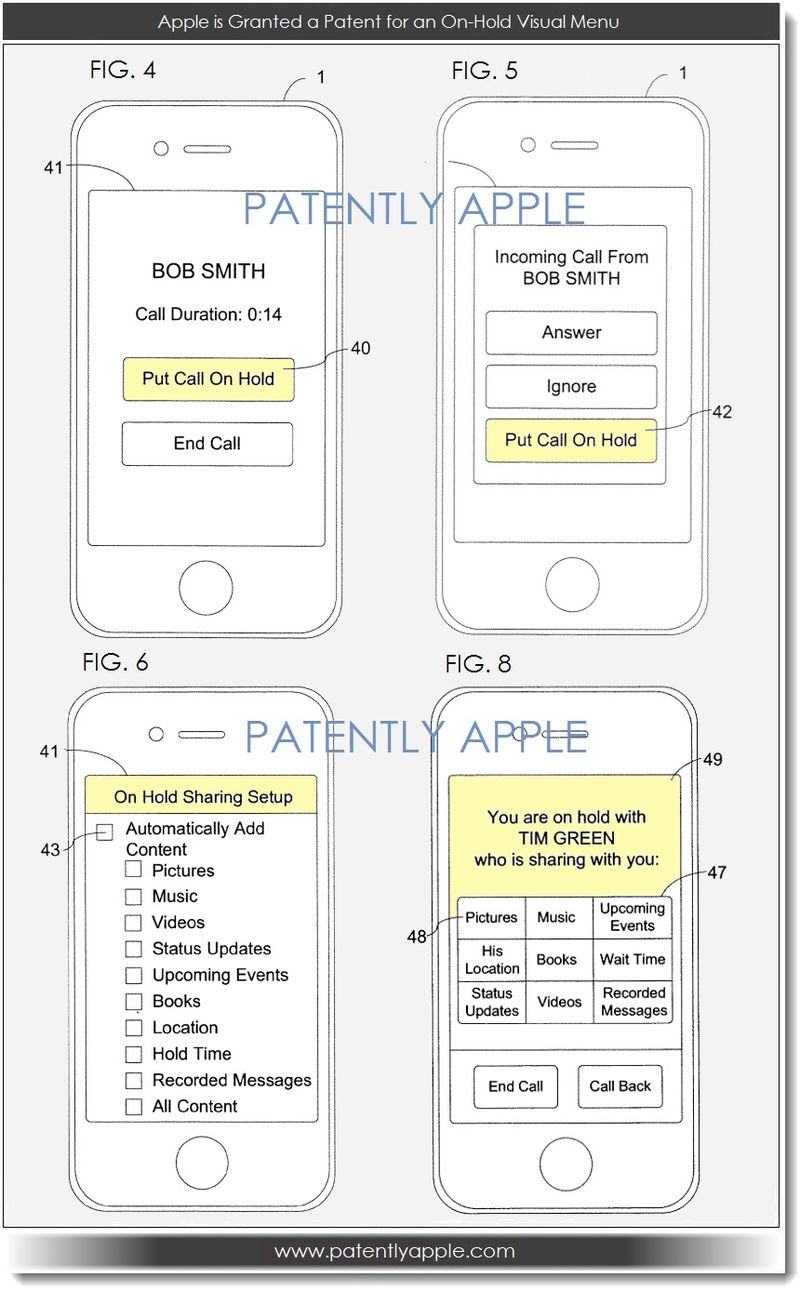 Apple credits Donald Pitschel, Imran Chaudhri, Freddy Anzures and Marcel van Os as the inventors of this granted patent which was originally filed in Q3 2011 and published today by the US Patent and Trademark Office. To review today's 26 granted patent claims and details, see US Number 8,494,123.

Since the iPhone's debut, Apple has placed a lot of energy upgrading their cameras. Every iPhone event advances the camera. Today, Apple was granted five camera related patents by the US Patent and Trademark Office. The five patents are titled as follows: 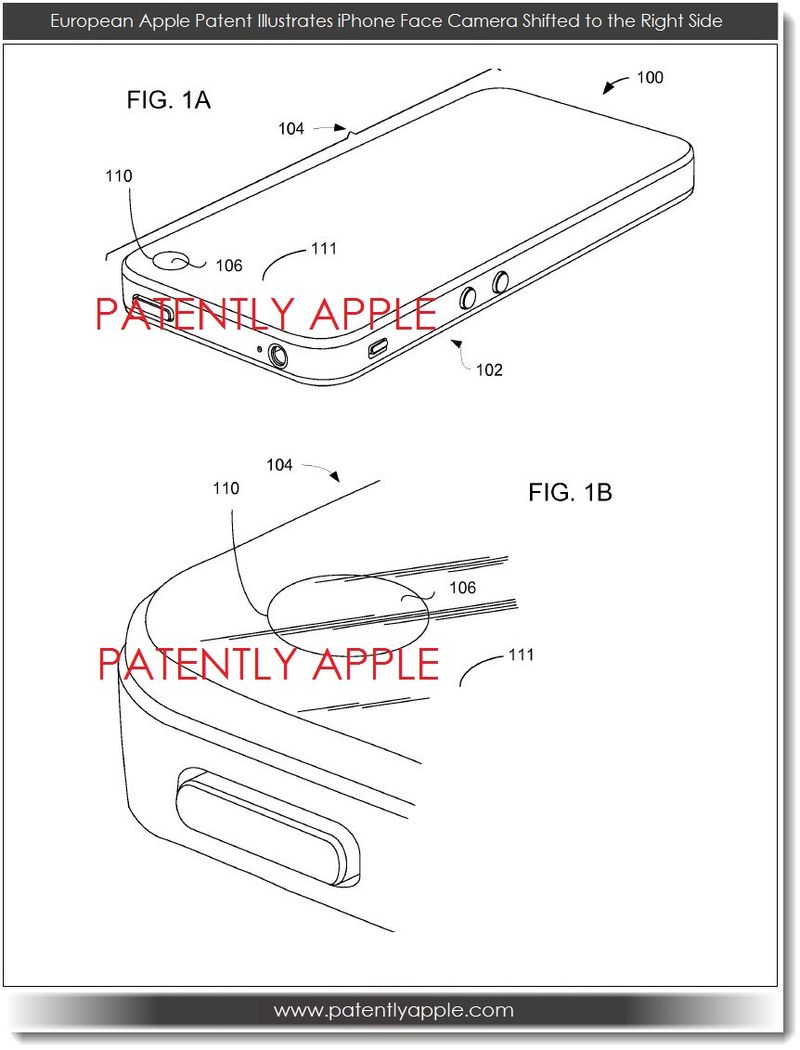 Apple filed a patent application in Europe under number WO2013106242 that covers a new technique for creating the iPhone's camera hole on the face side of the device as shown above.

The design involves a process for strengthening the iPhone's glass using a unique chemical bath. One of the listed advantages of the invention is improved image or video quality, which results from substantially reducing veiling glare. Yet the oddity in the patent application that stood out most was that the camera's face side aperture is positioned to the far right on the iPhone. This would align the face side camera with the backside camera. Whether this is something that Apple is seriously considering for a future iPhone is unknown at this time. 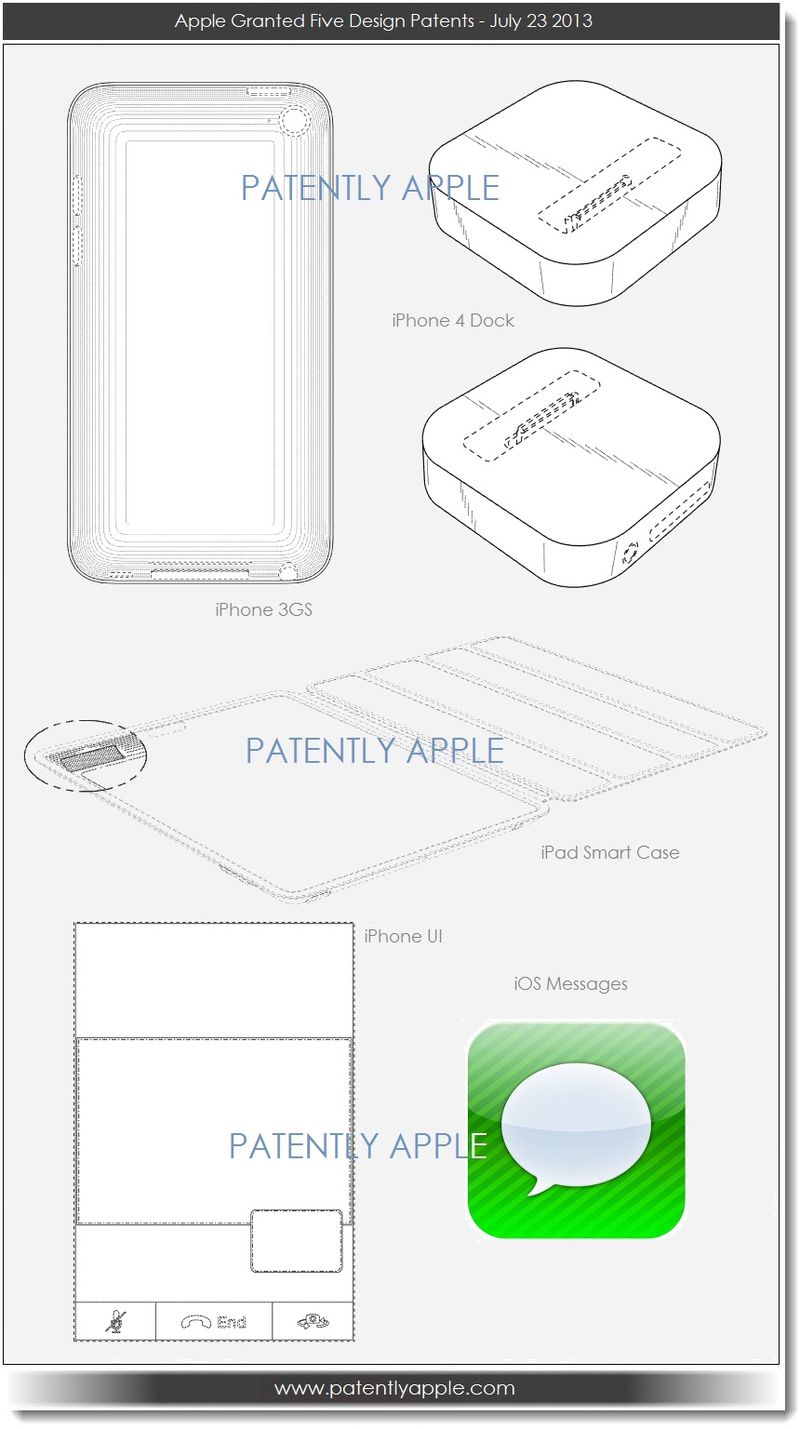 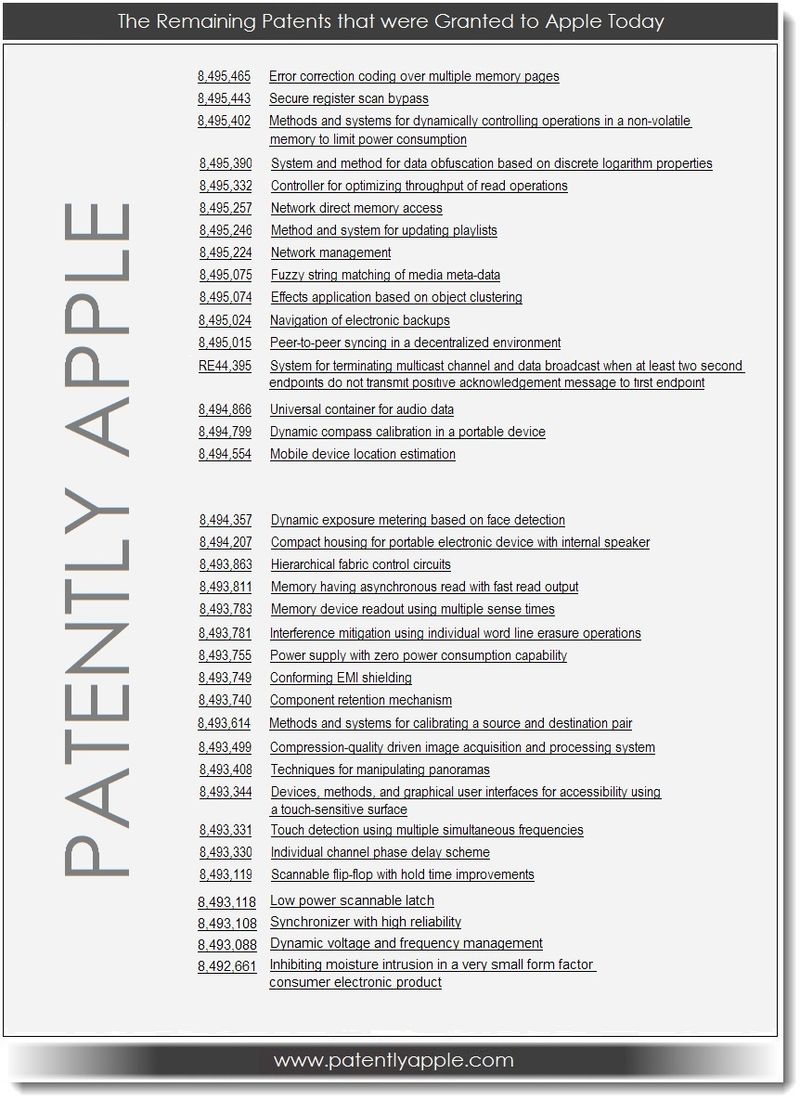