According to preliminary data from IDC, worldwide tablet shipments continue to surge, growing 142.4% year over year in the first quarter of 2013 (1Q13), Tablet shipments totaled 49.2 million units in 1Q13, surpassing that of the entire first half of 2012. IDC's stats show once again that Apple's iPad is the number one tablet brand in the world.


Apple outperformed IDC's most recent projections for the quarter, shipping 19.5 million units compared to a forecast of 18.7 million units. The company, which historically has experienced a steep drop off in first quarter shipments (following strong holiday sales in the fourth quarter), saw some smoothing of that seasonality this year. 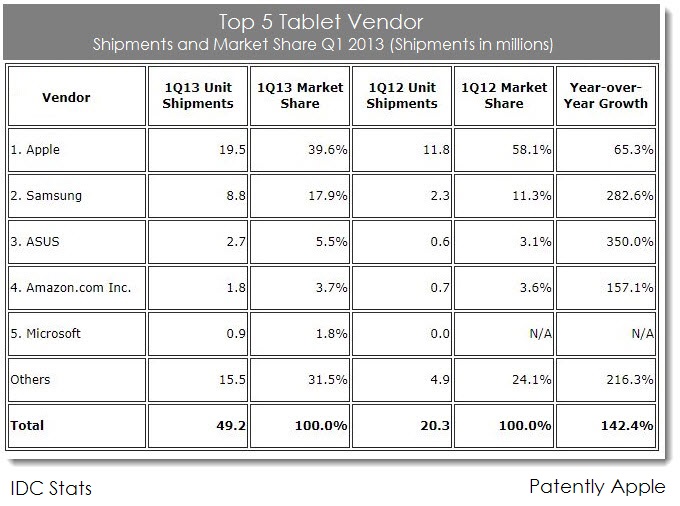 Tom Mainelli, Research Director of Tablets at IDC stated that "Sustained demand for the iPad mini and increasingly strong commercial shipments led to a better-than expected first quarter for Apple. In addition, by moving the iPad launch to the fourth quarter of 2012, Apple seems to have avoided the typical first-quarter slowdown that traditionally occurred when consumers held off buying in January and February in anticipation of a new product launch in March."

It should also be noted that recent statistics compiled by Chitika illustrated that Apple's iPad commanded 82% of Web Traffic in North America in March.

With stellar tablet growth year over year clocking in at 142%, we look back at comments that BlackBerry's CEO Thorsten Heins made yesterday during an interview at the Milken Institute conference in Los Angeles. Bloomberg recorded Heins as stating that "In five years I don't think that there'll be a reason to have a tablet anymore."

While Heins may end up being correct on his call in the long haul due to hybrid notebooks and Glass styled products coming to market, the timing of his statement in light of IDC's latest tablet stats puts Heins on a track all by his lonesome.

For now, Apple's iPad is still the king of tablets in the real world.

"According to preliminary data from IDC, worldwide tablet shipments..."

they are SHIPPING stats NOT SALES figures except for Apple.

Apple's numbers are sales as reported in their financial reports.

The other companies do NOT report actual sales

How did Samsung get such a high number?