Apple Patent May be Hinting of an iPhoto Upgrade for iDevices 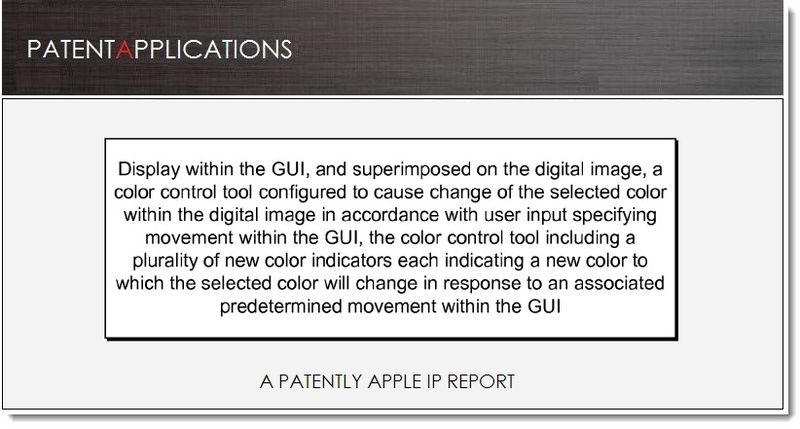 On May 2, 2013, the US Patent & Trademark Office published a patent application from Apple that may be revealing an update to iPhoto for iDevices. Apple states that their invention relates to performing on-screen image adjustments, for example, to adjust colors of photos by using color control tools overlaid on the digital images to be adjusted. It's difficult to assess if today's patent revelations cover the current version of iPhoto for iDevices or a possible upgrade. The patent graphics don't reflect the current tools. If you're a camera buff who uses an iDevice for your snapshots, then you may want to check this patent filing out to see if Apple is going to add any new tools that you've been hoping for.

Apple's patent relates to systems and techniques to intuitively and easily adjust colors in a digital image. In this fashion, users of image processing applications operated in accordance with the described technologies, among other potential benefits, can apply color effects, preset adjustments or both to digital images without having to know about color saturation, color temperature, hue or other notions of color science.

Additionally, the described technologies optionally can be integrated in a non-intrusive manner in a GUI of an image processing application running on mobile devices, for which display real-estate tends to be at a premium. For example, the described technologies provide a color control tool that can be superimposed on a portion of the digital image selected by a user for color adjustment, such that the color control tool contains indicators of available color effects and preset adjustments. In this manner, the user can provide input selecting both a color effect and its magnitude to be applied by the image processing application to the selected image portion by using the color control tool superimposed on the image portion to be modified. Typically, each of the available color effects and preset adjustments represents a predefined combination that includes at least two color transformations.

In general, one aspect of the subject matter described in this specification can be implemented in methods that include the actions of presenting, within a graphical user interface (GUI), a digital image including a plurality of colors, and receiving user input selecting a color within the digital image. The methods further include the actions of displaying within the GUI, and superimposed on the digital image, a color control tool configured to cause change of the selected color within the digital image in accordance with user input specifying movement within the GUI. The color control tool includes a plurality of effect indicators, each indicating a color effect or preset adjustment from among a plurality of respective color effects and preset adjustments to be applied to the selected color in response to an associated predetermined movement within the GUI.

In some implementation, the methods can include the actions of updating the digital image display in real time to show a result of changing the selected color in response to the received user input via the color control tool. In some implementations, the user input received via the color control tool further specifies a length of the movement within the GUI relative to the plurality of effect indicators, such that a magnitude of the change in the selected color is determined based on the specified length of the movement.

Apple's patent FIG. 1 shown below illustrates an example of a system 100 that includes an on-screen image adjustment environment. The system can be implemented as part of an image processing application executed by a computer system. The computer system can be a mobile device such as an iPhone, iPod Touch, iPad, MacBooks, digital cameras, media players or combinations of these.

The system can include a graphical user interface (GUI) that displays a digital image including a plurality of colors. The GUI can provide controls and indicators to be used by a user associated with the image processing application for specifying how to process the displayed image. The system can also include a plurality of utilities that carry out under-the-hood processing of the displayed image. 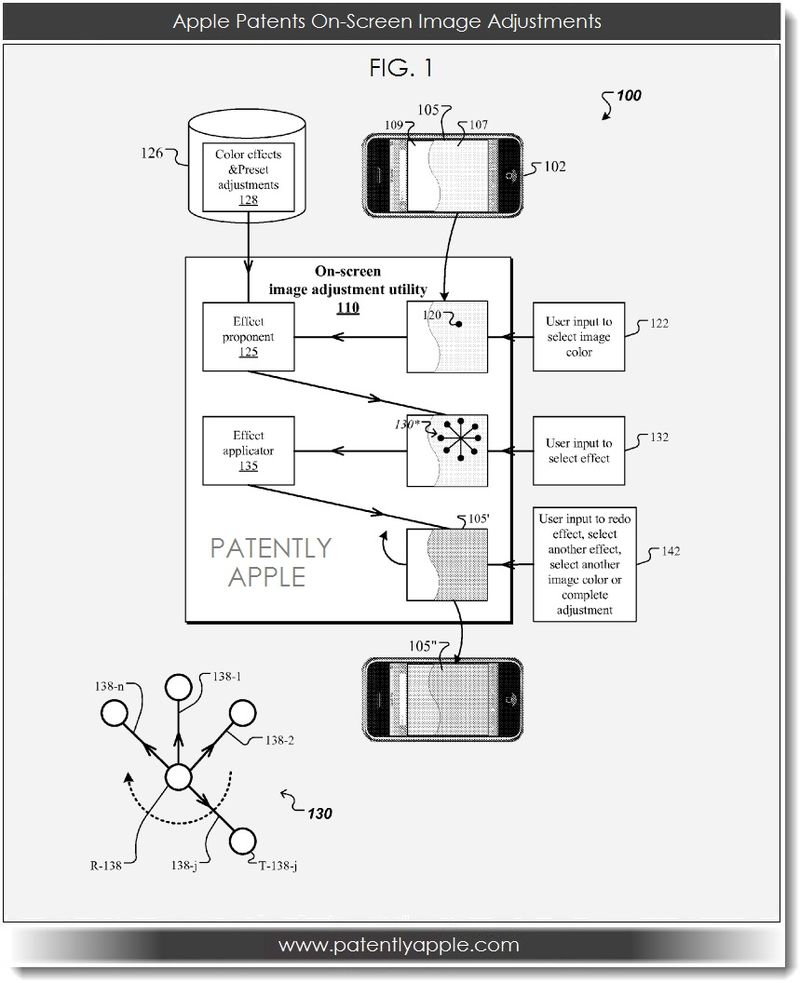 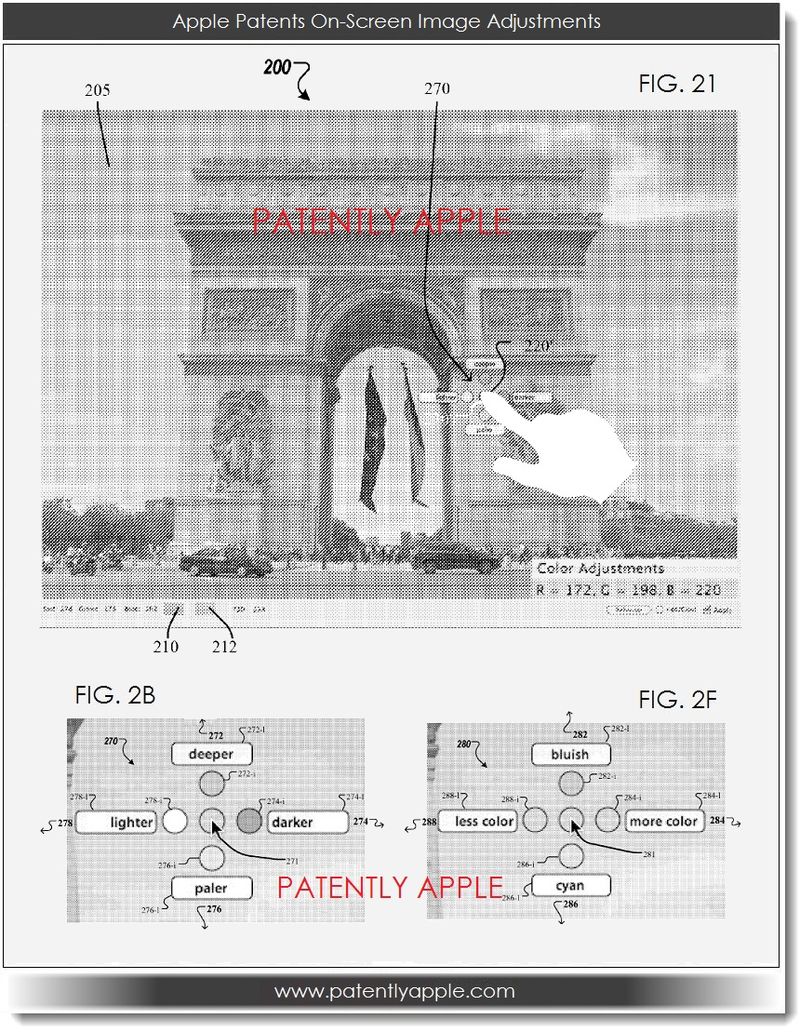 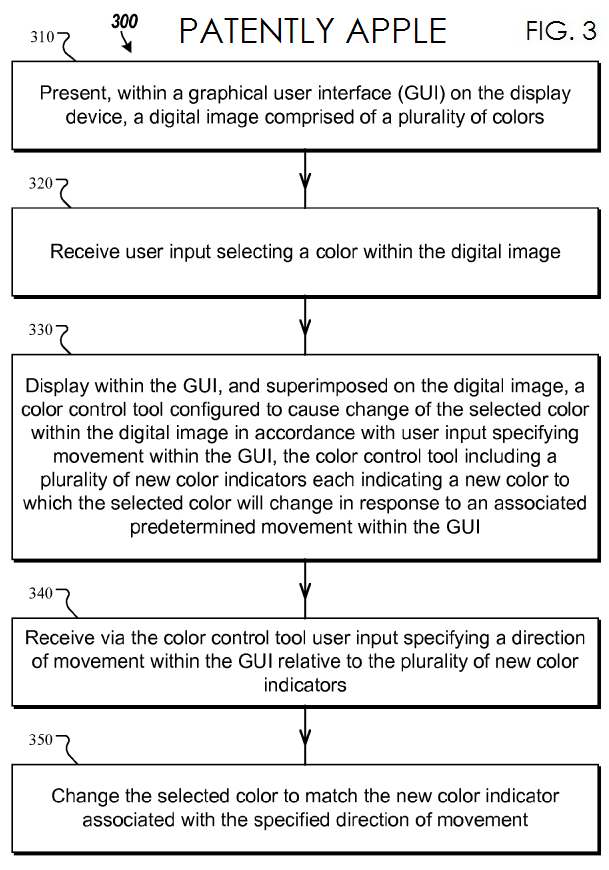 This is a very detailed patent that only camera buffs could appreciate. For those of you who wish to delve into this in-depth, check out Apple's patent application 20130106899.