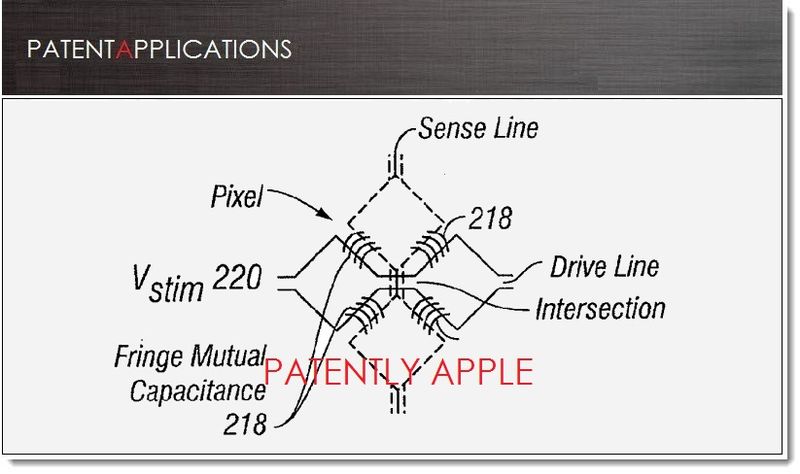 On May 16, 2013, the US Patent & Trademark Office published a patent application from Apple that reveals an all-new touch sensor panel design for larger displays. Today's touch sensor panels are designed like a checkerboard taking on a matrix of drive and sense lines arranged in rows and columns in horizontal and vertical directions. That may be fine for smaller touch displays but as the touch displays become larger such as those for a future MacBook or even an iMac, the current design becomes a drag on the speed of touch command execution. Apple's next generation touch sensor panel is likely to take on either a web-like design or one that incorporates thick diamond-like shapes so that the user's finger is more likely to hit the sensors faster and easier.

Part of Apple's patent background states that touch sensing pixels can be varied in size and/or spacing to enable touch sensitivity in large panels without increasing the number of drive and sense lines which can otherwise increase the processing burden and can cause negative optical artifacts when viewing the display device through the touch panel. However, increasing the size and/or spacing of the touch sensing pixels can negatively impact the resistance and capacitance (RC) time constant per pixel, thereby hindering touch sensitivity of the touch panel and limiting the speed at which the touch panel can operate. 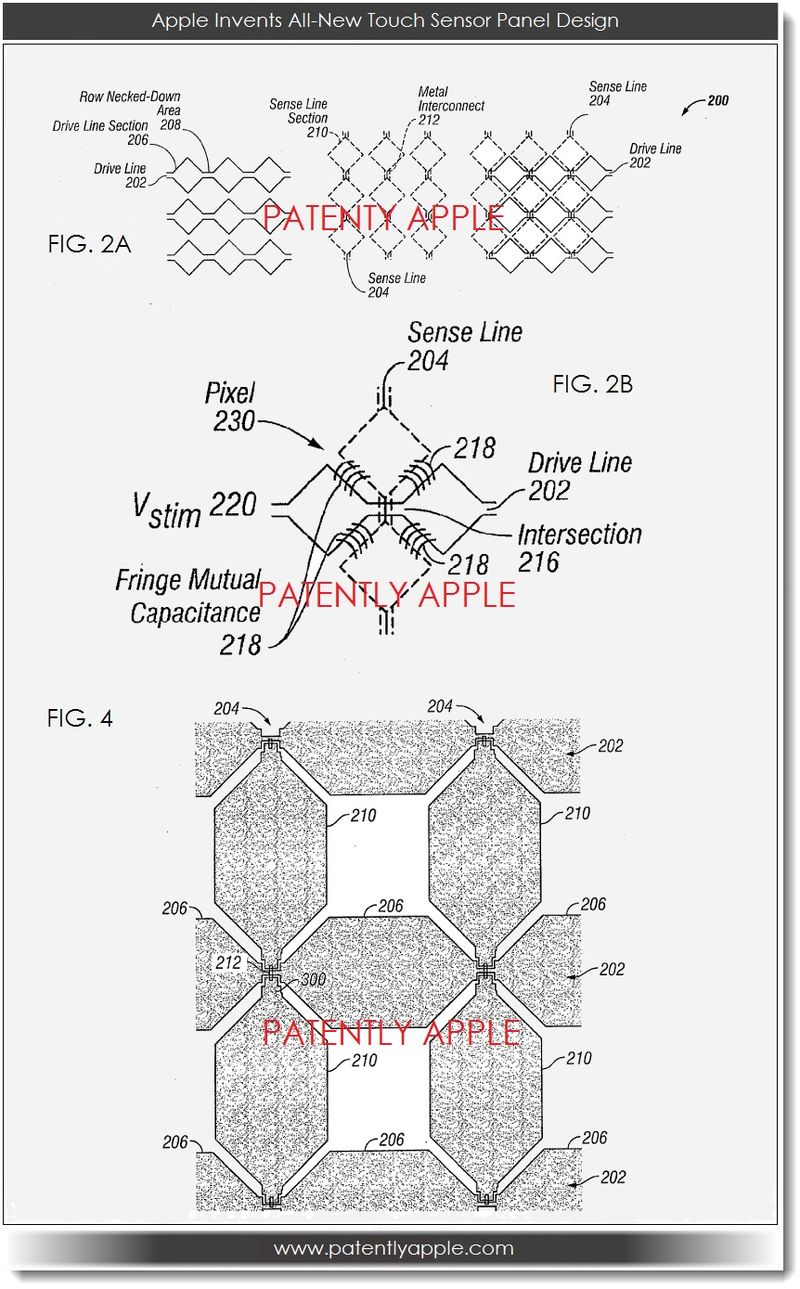 In April we posted a report titled "Finally, Apple reveals their Hybrid Notebook Tablet Details." The report, amongst other things, discussed the Notebook-Tablet hybrid device's touch display and its unique technique of using magnets to remove and reattach the display to the keyboard.

Today, the US Patent Office revealed a new patent application from Apple that's all about an all-new touch sensor panel design. You should take note that Apple's patent application was only filed four months ago and it's not associated with any other patent such as provisional patent, nor is it a continuation of another older patent. This is why this is a patent to take careful notice of.

Admittedly, it's an overly technical patent that only those in the field of touch displays could truly appreciate. Apple provides us with very little to grasp onto here for their reasoning for this new sensor panel design except for one tiny admission. The new design is to accommodate larger displays for a computer system which they spell out at the very end of the patent as relating to a notebook, a future MacBook (Air or Pro). Although the technology could also apply to a future iPhone and iPod touch, Apple's all-important "Patent Claims" give the "computer system" priority in sequence, which isn't accidental.

Additionally, in the very first paragraph delving into the details of their invention they clearly state that "This relates to the formation of touch sensor panels, and in some examples, larger-size touch sensor panels." That's very specific.

Later in the patent to further clarify that the technology applies to a "computer system" Apple states that a "Computing system can also include host processor for receiving outputs from processor subsystems and performing actions based on the outputs that can include, but are not limited to, moving an object such as a cursor or pointer, scrolling or panning, adjusting control settings, opening a file or document, viewing a menu, making a selection, executing instructions, operating a peripheral device connected to the host device."

And lastly, Apple ends their patent application with mention of patent FIG. 13(c) which states the following: FIG. 13(c) illustrates an example personal computer that can include touch sensor panel (trackpad) and display, the touch sensor panel and/or display of the personal computer (in examples where the display is part of a touch screen) including a touch pixel design according to the various examples described herein."

Considering that this is a patent application and not a design patent, Apple only has to convey the idea and not the design. This is a 2013 patent, so obviously the design illustrated below isn't about an old MacBook. It's just a standard conceptual graphic. The point is that the larger display of Apple's patent claims is in fact a notebook. 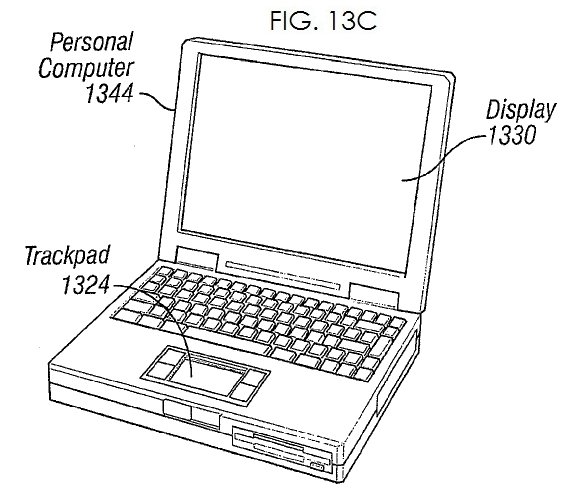 At the end of the day, we've seen two recent Apple inventions that support the design of touch displays designed specifically for a notebook-tablet hybrid. To accommodate such a design, Apple has had to rethink the touch sensor panel design and that's a great indication that this is a serious research and development project on the move.

Apple credits Seung Hong, Martin Grunthaner, Steven Hotelling and Lynn Youngs as the inventors of this patent application which was filed in January 2013 and published today by the US Patent and Trademark Office. 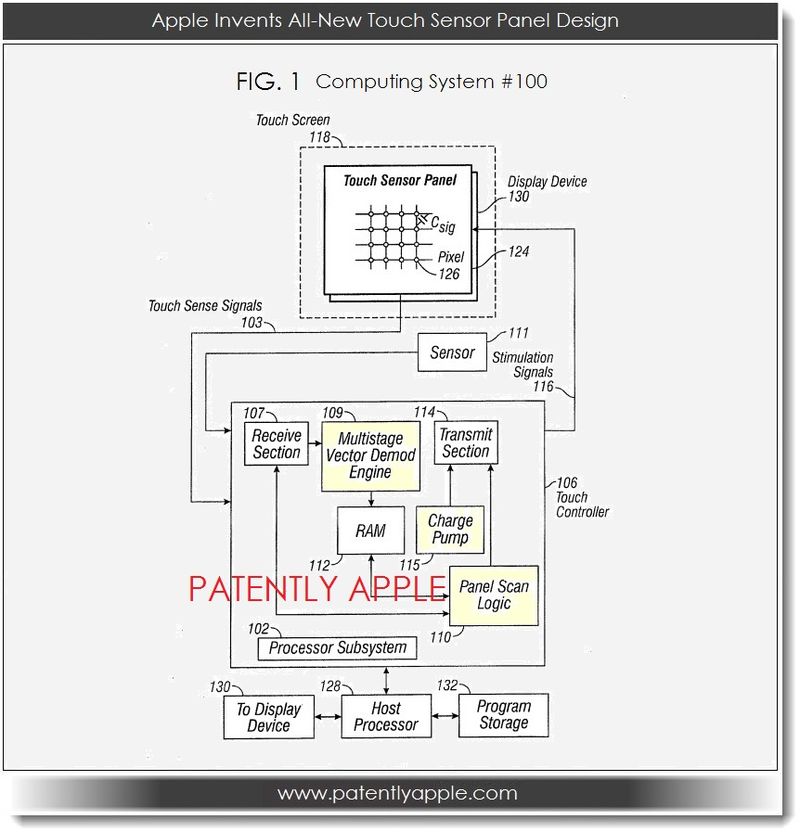 Why did Apple go with their own In-Cell display technology? Why was Apple first to the all-in-one desktop design that everyone is now copying? Why did they create the MacBook Air before anybody or the iPhone instead of a butt ugly dumbphone. They do it because it will provide a superior consumer experience. I have no idea why you even asked your question being that you've been around for a while, melgross.

Of course, there are large displays with touch screens now. Two that come to mind are from Dell and HP. This brings up the point of whether both of those companies have their own special technology for the touch, or whether they find the more usual tech to be sufficient. As I haven't tried those monitors, I can't say whether the sensitivity is sub par or not. But if not, then what's the purpose of Apple coming up with another method? Are they paying license fees they could avoid by owning their technology, even if it isn't superior?

Apple has loads of neats patent, but isn't putting them into products. Their senior management is retarded !