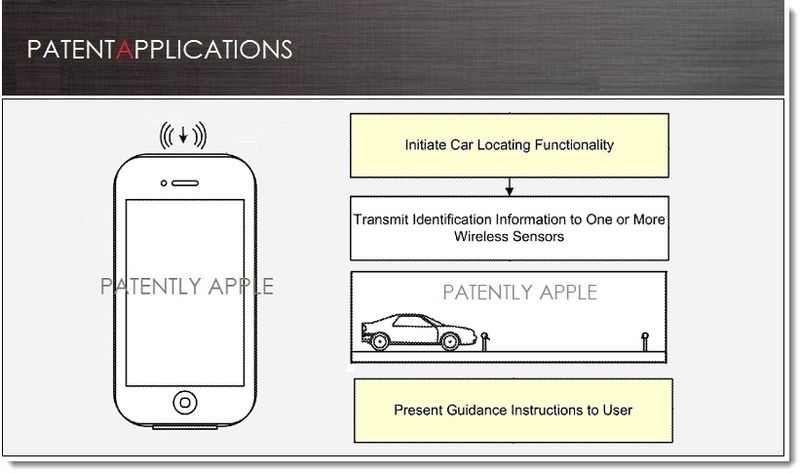 On April 25, 2013, the US Patent & Trademark Office published a patent application from Apple that generally relates to future iPhones being able to locate your vehicle in a multi-tiered parking lot. In fact, Apple states that a "parking location" can be any place where a vehicle can be parked, stored, or docked. For example, in the case of a boat, a parking location can refer to a berth in a marina; in the case of an aircraft, a parking location can refer to a location at a municipal airport (e.g., outdoors or in a hangar). The vehicle can go beyond a car and it could be useful in trying to find a bike that you've parked. This new parking system application is likely a sub-system of a broader application. Part one of Apple's future automotive-application was covered in our first patent report of the day titled "Apple Reveals Advanced Automotive Access & Control System." It's pretty clear that Apple's acquisition of WifiSLAM will definitely play a role in the development of this application.

Locating a Vehicle in a Parking Structure 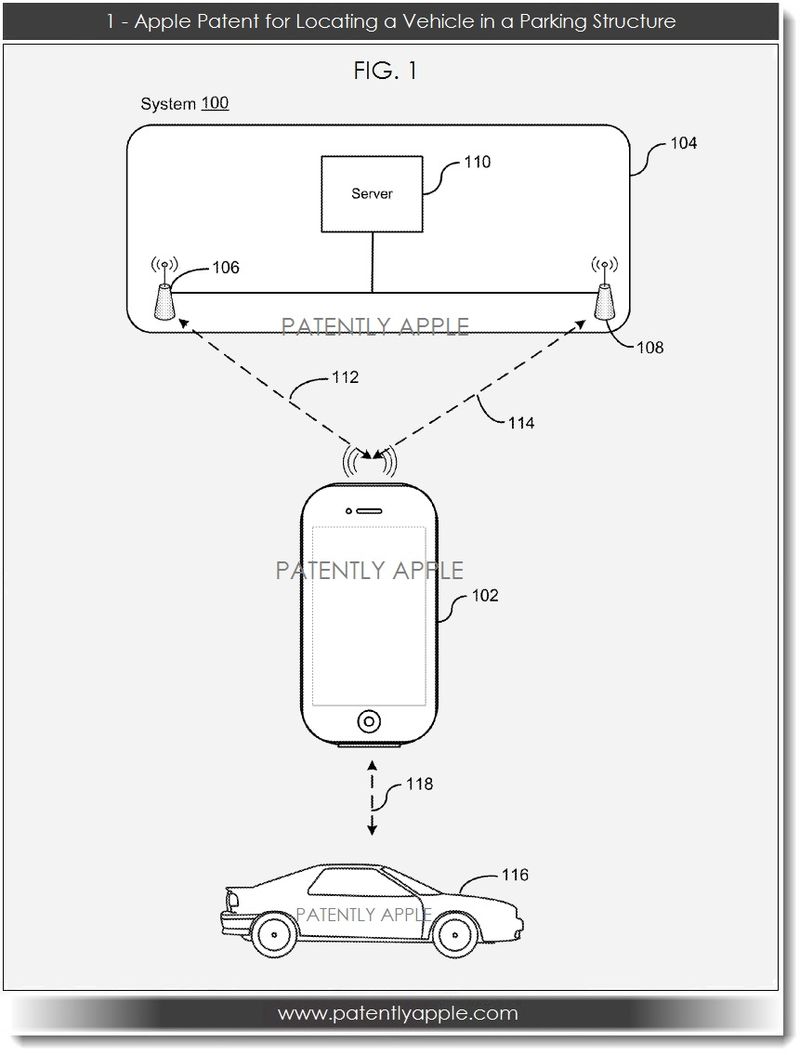 Apple's patent FIG. 2 shown below illustrates system 200 which includes a portable computing device 102, a parking system 104, and a vehicle 116. Apple notes that in some embodiments, the iPhone can include additional modules, such as global positioning system (GPS) modules, battery modules, motion detection modules, device orientation modules, magnetometer modules, three-dimensional gyroscope modules, connector modules, audio modules, three-dimensional video processing modules, acceleration detection modules, camera modules, and/or the like. This is where Apple's investment in WifiSLAM could come into play by allow the user to visualize their proximity to their car in the parking lot and guide them to it visually on their iPhone in real-time.

Apple states that a future iPhone with these capabilities will display a "My Car is Parked" or a "Find my Car" button on the iPhone's display to start the app which includes a 3D map and so forth. 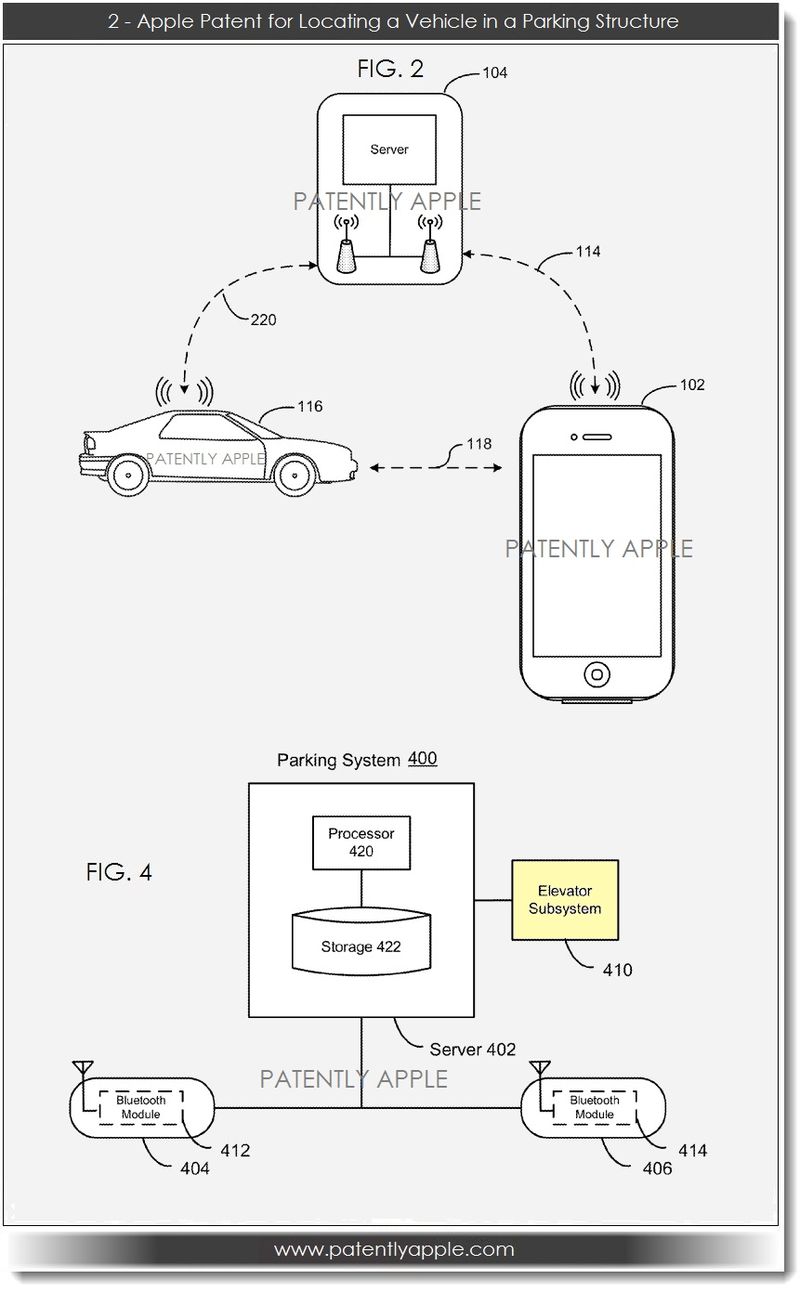 Noted below is Apple's patent FIG. 9 illustrates an exemplary configuration of a parking system. 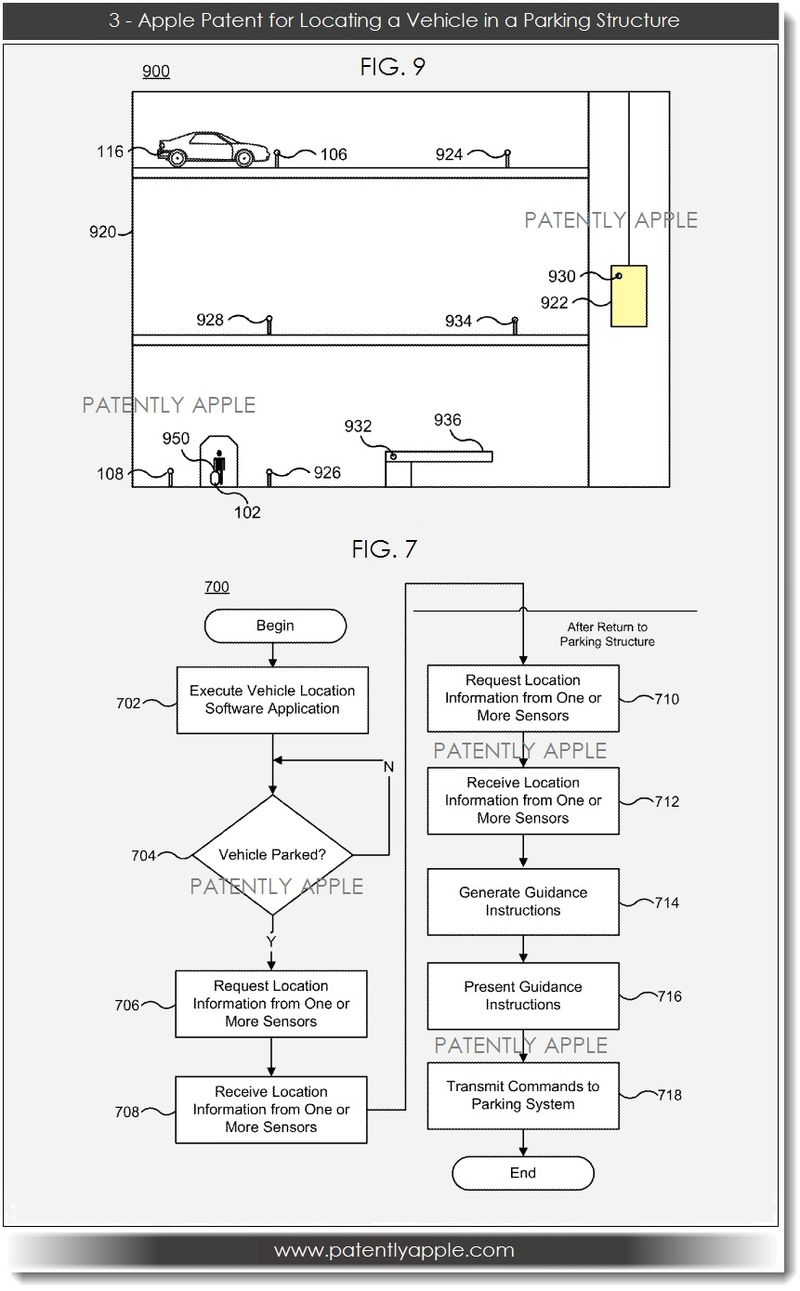 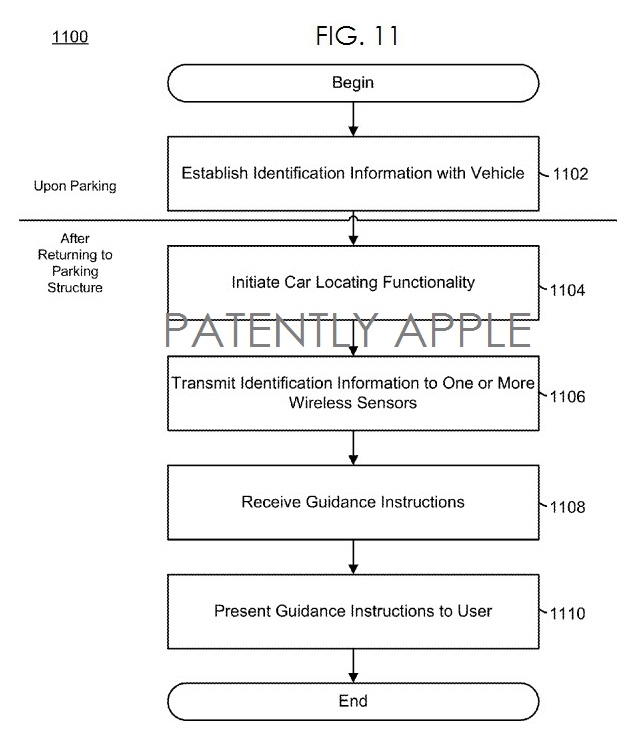 While Apple's patent focuses their application applying to a car, the fact is that Apple clarifies that a "vehicle" can be any suitable transportation machinery, such as an automobile, a truck, a bus, a tractor, a golf cart, a go-kart, a motorcycle, a scooter, a bicycle, a motorized bicycle, a boat, a watercraft (e.g., a jet-ski), an aircraft, a lawn mower, a snowmobile, and/or the like. A "parking location" can be any place where a vehicle can be parked, stored, or docked. For example, in the case of a boat, a parking location can refer to a berth in a marina; in the case of an aircraft, a parking location can refer to a location at a municipal airport (e.g., outdoors or in a hangar).

Apple credits Brian Tucker, Emily Schubert, Jesse Dorogusker, Joakim Linde and Stephen Chick as the inventors of this patent application which was originally filed under serial number 278035 in Q4 2011.