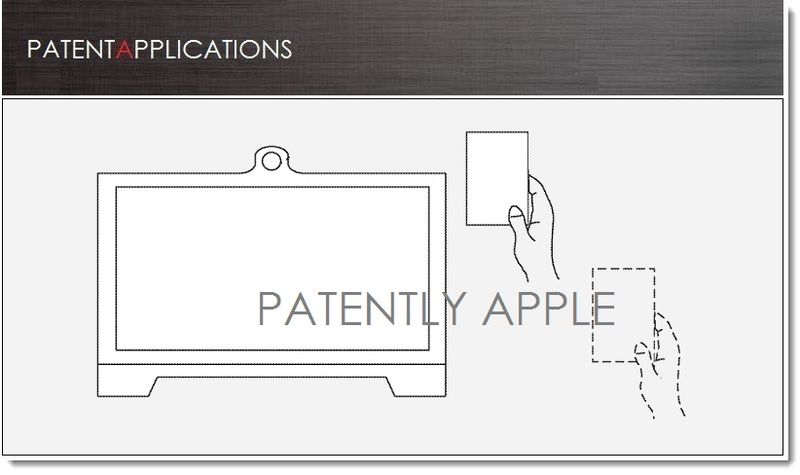 While such portability of media content provides some advantages, some challenges still remain. Interacting with portable media content may be limited; or may require too many manual steps for users; or may not always be intuitive, easy or convenient for users.

Thus, there is a need for improved techniques for interacting with media content.

Insertion or Importation of Media Content into Electronic Documents

Apple's invention pertains to improved techniques for interacting with one or more "handheld carriers" which Apple later translates as being iDevices such an iPhone or iPad kind of device.

A user interface (#120) may be provided by the iDevice for controlling the operation of one or more of a plurality of media activities. In various different media activities, using the user interface 120, a user may experience and manipulate media content in various different ways, or may experience and manipulate media content of different types or various combinations. 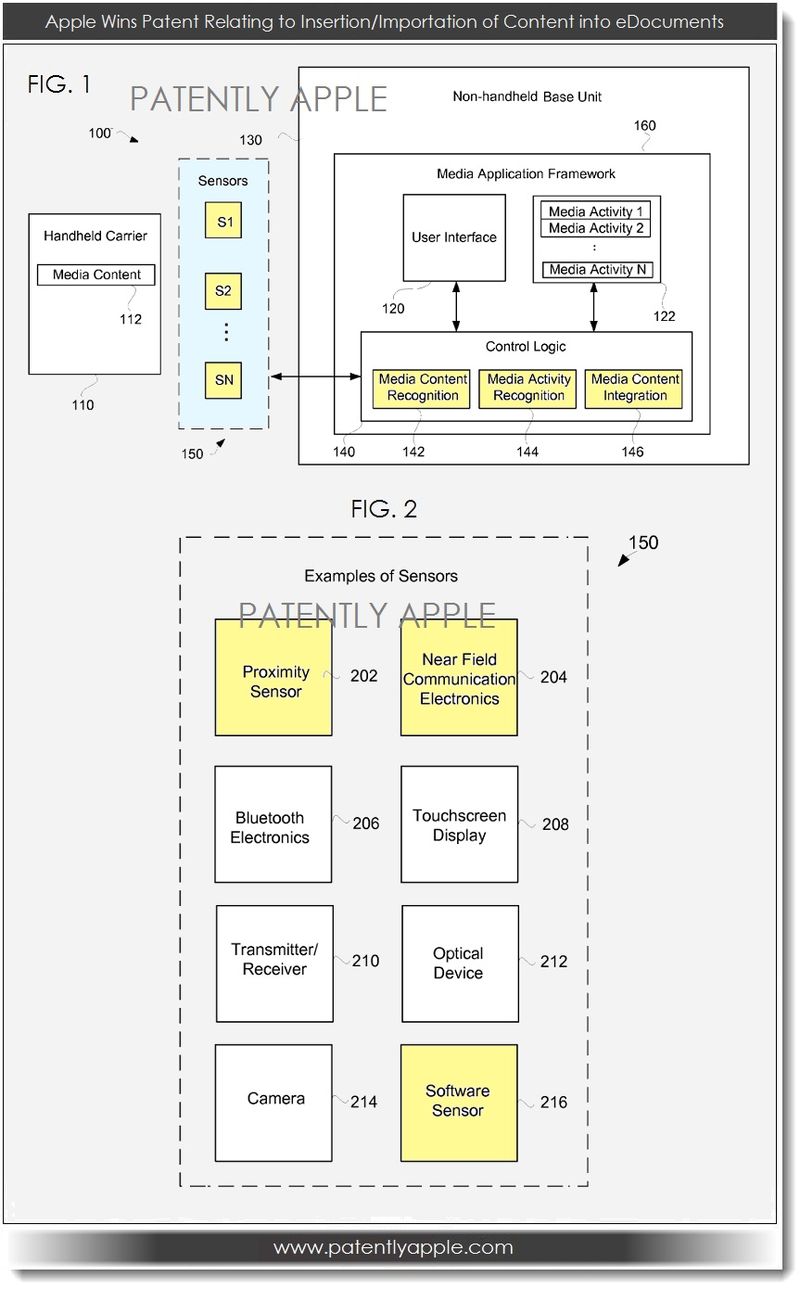 About the New Sensors

Apple's patent FIG. 2 noted above illustrates a block diagram of several examples of sensors that may comprise one or more of a proximity sensor (#202), near field communication electronics (#204), short range wireless electronics (# 206 Bluetooth), or an optical device (#212).

Media content, for example, a hand-drawn picture, may be inserted into the electronic document at the desired location. A mouse click (or suitable selection method) may be employed by a user, and a selectable menu option, for example, "Insert Hand-Drawn Pic", of a pop-up menu may be displayed adjacent to the desired location. Such menu selections, as well as other machine state aspects of the media activity may be sensed by one or more software sensors. 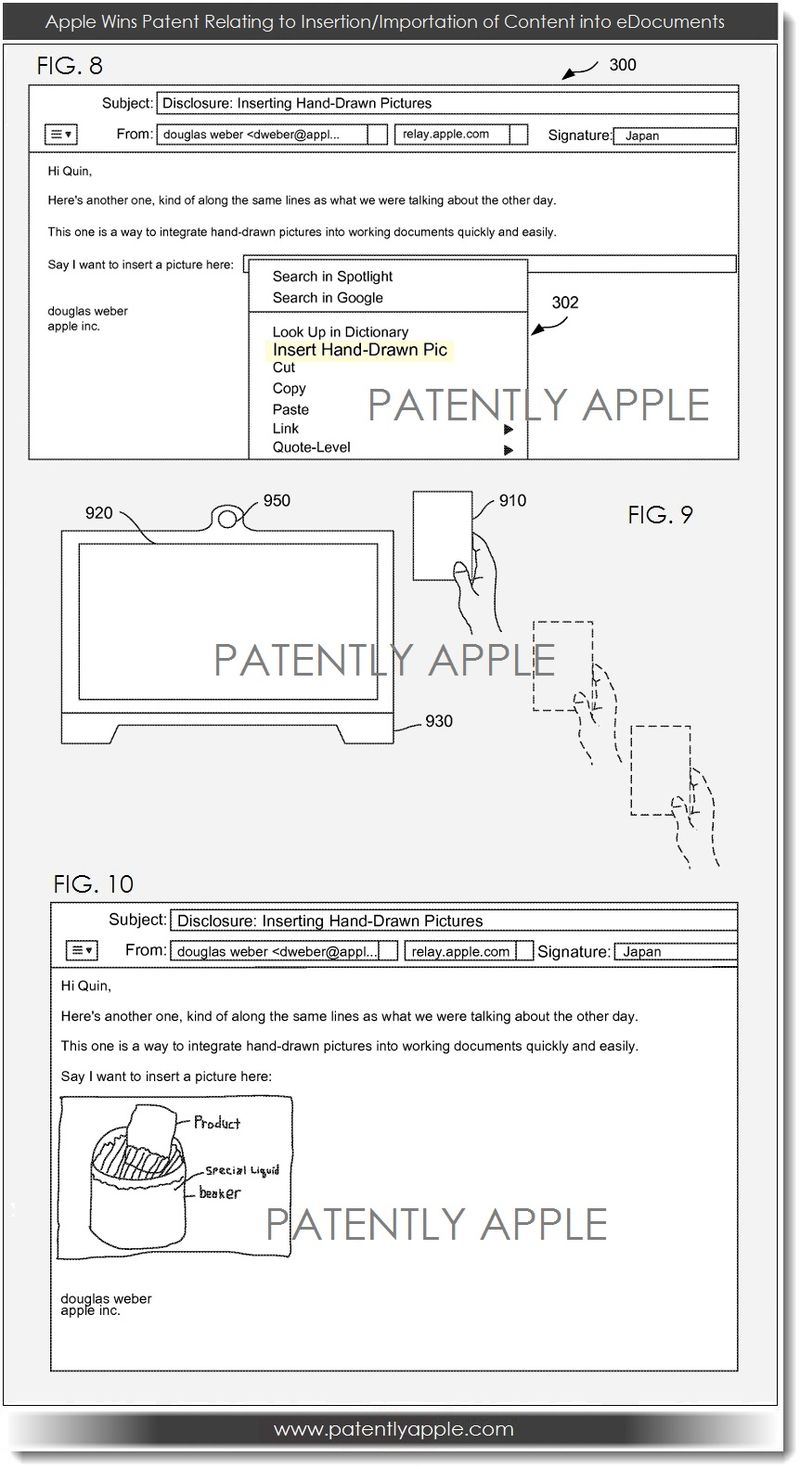 Apple's patent FIG. 9 noted above illustrates a simplified diagram of sensing an iDevice hosting media content with an iMac (#930). Remember, this isn't a design patent, so don't get caught up in the iMac's design in this illustration as it's only there as a base illustration to convey a visual of a desktop.

Elsewhere in the patent filing, they note that the user will have access to cropping tools so that an image can be straightened in the eDocument. Further, the media recognition component may include handwriting recognition software, for recognizing handwritten text of the media content that may be transferred.

And lastly, the new user interface may also comprise a haptic notification for notifying the user of the iDevice. Once the iMac has obtained the intended graphic that the user wants in their eDocument, it will send a message to the iDevice to initiate a haptic sensation to let the user know that the transfer has taken place.

Apple credits Douglas Weber as the sole inventor of this granted patent that was issued today by the US Patent and Trademark Office. Considering that the patent was originally filed in January 2010, it would mean that the application must have been made public in early to mid-2011. Translation: it would appear that Samsung may have "quickly" copied Apple's idea and brought it to market faster. So on paper at least, this would still appear to be a typical Samsung copycat move to me. How about you?

That doesn't make any sense no matter how convoluted the logic you present. Given that the GS3 was revealed on 3 May 2011 and it would have taken months to develop, test and implement S-Beam on the GS3 prior to the reveal on May - it would be impossible for samsung to have copied Apple.