Samsung Reportedly Making Last Minute Changes to the Galaxy S4's Display and Processor before Launch. The Question is why?

On February twelfth, Apple's CEO Tim Cook, speaking at an investor conference hosted by Goldman Sachs in San Francisco, called the color saturation of OLED (organic light-emitting diode) displays "awful." Tim Cook added that "If you ever buy anything online and really want to know what the color is, as many people do, you should really think twice before you depend on the color from an OLED display." That was clearly a shot at Samsung's OLED Display quality. Rumor now has it that Samsung may have decided to make last minute changes to the Galaxy S4's display and processor prior to its launch on March fourteenth. The question is why?


The Korea Times is reporting this morning that there will be a last minute change for the new Galaxy S4's application processor and display. The report states that "Market insiders overwhelmingly agree that a 4.99 inch full HD LCD panel will be used for Samsung's new model replacing the AMOLED panel beloved by the handset maker from 2010 with Galaxy S to its latest hit, Galaxy S3. The biggest reason for AMOLED being replaced by LCD panel is its problem with the low yield." Yet that's the rumor mill's spin on this. What's the true reasoning behind Samsung's possible display switch?

On a second front, we reported last week that Samsung was trying to start a platform war with Qualcomm and tried to attract a number of key smartphone OEMs to switch from Qualcomm to their new Exynos Octa processor. Yet officials from Huawei and ZTE commented during the Mobile World Congress in Barcelona, Spain, that they were unimpressed by Samsung's Exynos Octa, the first AP to have eight cores and are unlikely to purchase them. One Huawei Official humorously stated that "Only Samsung uses Samsung chips. We have our partnership with Qualcomm and our own chip business. We're really not interested in using Exynos."

While that was a huge slap in Samsung's face, they may have used that abrupt feedback to quickly make a last minute change to the Galaxy S4's processor so as to avoid criticism when their new phone debuts on March 14 in New York.

The rumor out of Korea this morning states that Samsung will use "Qualcomm's Snapdragon 600 Series application processor will replace Exynos 5 Octa. The LTE smartphones consume more electricity than the 3G phones, thus they require application processors with smaller power consumption for an extended use. The overall market opinion to Exynos 5 Octa was that its performance on the smartphones didn't meet such market expectation. Qualcomm's Snapdragon 600 is being mentioned to be the most probable substitute to Exynos 5 Octa for Galaxy S4."

Yet another rumor shows that Samsung may actually use both processors. The report states that the Galaxy S4 will run on Qualcomm's processor in the US while running on their Exynos in all other markets. We'll know for sure on March 14 when Samsung debuts their next generation smartphones.

In the end, we'll be closely watching to see if Samsung actually drops their AMOLED display in favor of an LCD Panel. It would be the ultimate admission that their choice of display for smartphones was in fact inferior to the iPhone's Retina Display. Yet somehow it's a little hard to believe that Samsung would ever admit to that, so we'll be watching for their marketing spin about the switch if in fact the rumor pans out.

In fact, there could be one possible twist to this story. The current invitation to the Galaxy S4 event illustrates a "4" in 3D. This could be a new Samsung smartphone feature that would justify their switch to a different display technology without having to admit to any of AMOLED's drawbacks. This is the one feature to watch for. Stay tuned, as we'll know how this all pans out in ten days' time. 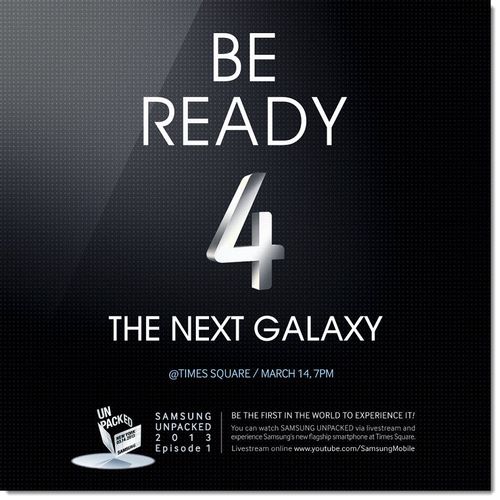 Another "We did it first!" gimmick to add to the Android camp. Rush a half-assed feature to market to claim "innovation" achieved. I wonder how many people will buy special glasses just to use "3D" features?

The reason why Samsung is dumping Amoled is due to the difficulty of achieving 1080p on small screens with Amoleds. Amoleds will make their return once Samsung figures a way to produce them with high yields.