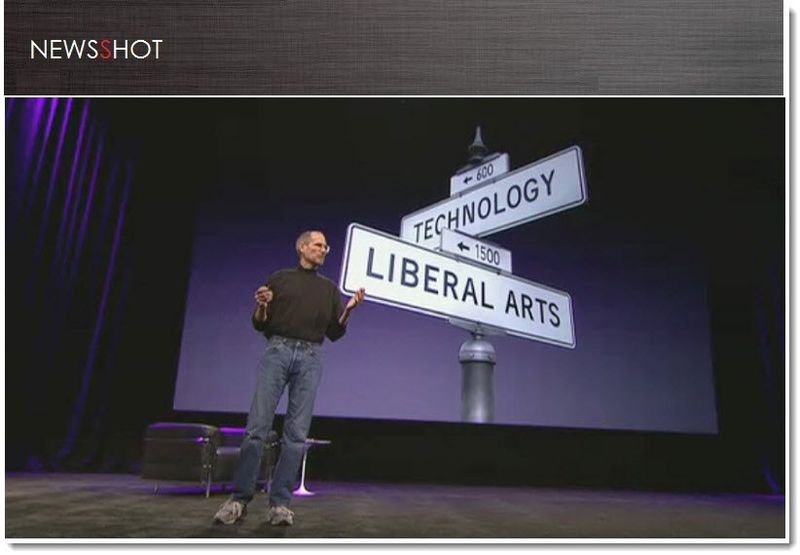 In March 2011, Steve Jobs talked about the crossroads between technology and the liberal arts. Steve Jobs stated that "It's in Apple's DNA, that technology alone is not enough. That it's technology married with liberal arts, married with the humanities, that yields us the result that makes our heart sing. And nowhere is that more true than in these Post PC devices." Steve Jobs brought this philosophy to the Original Macintosh team in the 1980's. That's why he emphasized that it was in Apple's DNA. Samsung's Shin Jong-kyun, mobile chief decided to insultingly use this philosophy in his failed Galaxy S4 presentation last week. They not only copy Apple's products but now attempt to copy, or better yet hijack Steve Jobs' philosophy which exposes the very depth of their envy of Apple's continuing success.

Shin stated during his presentation: "'Samsung has taken technology and innovation forward to help us get close to what matters in life, to help us live a richer, simpler and more full life." He added, "The Galaxy S4 isn't just a phone but the right communications tool that blurs technology and humanity."

The Korean Times sang Shin's praises for copying Steve Jobs this morning. They saw the New York event as a raving success like only a cult could. It may have been hailed in Korea, but it wasn't received well in North America.

But I'm always amazed at how this copycat company continues to believe they're the next Apple even though they create more talking stones than real smartphones. And when Samsung's leadership has to stoop to the level of actually robbing Apple's philosophy it truly demonstrates just how twisted and deluded they've become of late.

Samsung is a company who stabbed their partners Apple, Qualcomm, Google (with their upcoming Tizen OS) and more recently Microsoft who Shin thought to smack last week. Is this how a so-called technology leader is to treat their partners?

The bottom line is that we know what's in Apple's DNA because it's been there since the very genesis of the Company. On the other hand it's only recently come to our attention that the art of backstabbing and copycatting are the true traits found in Samsung's DNA. And while Shin thought that we wouldn't notice his attempt at stealing Apple's philosophy, we did, and it's time that someone in the press shines a light on this

Jack, thank you for your articles, for which I like Patently Apple more and more.

Special thanks for this report. It's just awesome! Haven't heard any of those arguments anywhere yet. Even respected resources shut their mouths on such topics. You don't. Thank you for that!

They just couldn't do a presentation in a worse way. Let me list some of things:
• CEO of Samsung self-portrayed as a ''new Steve Jobs'', just watch the moments when he appears from behind the curtain.
• The woman part portrays homewives that they dropped off college or high school because they get married or get pregnant early. Seriously, Samsung couldn't portray women more dumber than it did that night.
• People who presented features were mostly (if not all) actors. I don't know about the guy in the very broad ugly pants that explain most of the features, but rest were just bunch of fools.

Well I think, this is a result of competition among two companies to become the number one in the mobile industry.

Posting here from Seoul, where I'm a long-term observer of the scene. I agree with your sentiments, but would add that the Korea Times should never be taken as a fair barometer of Korean opinion. Their articles on Samsung have been over-the-top obsequious for many years. Judging from comments by netizens (in Korean) attached to articles and bulletin boards in the past few days, the preliminary judgement on the S4 ranges from mild disappointment to sharp derision. Right now phones from LG and Pantek appear to be riding high in the tech world here, and the iPhone is maintaining its very loyal fan base.
The Korean press has yet to report on the negative perceptions of the roll-out event, including charges of sexist portrayals and likely is at a loss how to understand U.S. press reaction.

Yes I saw that bizarre and ugly event - relive as I had no motivation to watch it live. After seeing it, I was quite happy not to have lost sleep to watch one of the most pathetic product launch I saw till date and that too from a multinational company. Last year I have seen almost every product launch from technology companies including, Windows 8 developer conference, but this is the worst of all. They said, they have a camera which can take audio before picture - I am emberassed listening to this!
Honestly, they go gigantic screens because they cannot fit in a strong performing hardware in a small screen at all.

Spirol, Thanks for your comment but I think that you've been watching too many Exorcist movies (ha!). I know that you believe that Samsung does no wrong and I appreciate your view to a point, but stop drinking the holy water.

Whenever there is an inflammatory post about Samsung - the worms come out of the woodwork vilifying the company and proclaiming it the antichrist.

A court in California disagrees with you.

Samsung is analysing the competition - there is no 'proof' of copying...

I guess you didn't pay attention to Microsoft's Surface introduction.
They also copied this and other this from Apple.

I have tried to be patient and to understand but hiring cheap celebrities
To lie on their blogs about Apple is the last straw.
I am done with this company. I will never buy any Samsung product again
Shame on them. An embarrassment to a formerly good company.

Is that Samsung' new copycat mantra? Who knew? To me it sounds more like a drug induced psychiatric treatment for Cultists. Oh the joy of copying and stealing ideas. Who cares who invented it, it's ours for the taking, the joy of taking. Never forget "the joy" of it.

Just sleep it off, you'll feel better in the morning.

It strikes me that you missed the point of the joy associated with discovering the new "real competitors don' look for cheaters, they race to the finish and lean into the tape."

This should be a front page story rather than the bought and paid for stories I've been reading about the G4 launch. Samsung = F-

Anytime a company that has the success that Apple has had can expect to be copied. Maybe Apple didn't expect if from partners like Samsung & Google. Especially since Google's CEO was on Apple's board of directors before that launched Android. That seems almost criminal to me, unethical at best.

At least Apple does benefit from the first mover advantage as they did with iPods, iPhones and iPads. It normally takes the imitators a few years to catch up. Apple just has to continue to innovate and patent what they can to slow imitators down.

Hopefully, Apple and customers will benefit from the competition.

I'd appreciate it if you'd add a postscript referencing the, what was it?, 189-page document in which Samsung's software/hardware engineers analyzed every single detail of the iPhone in order to copy it!

That was revealing about the company's DNA, for sure!