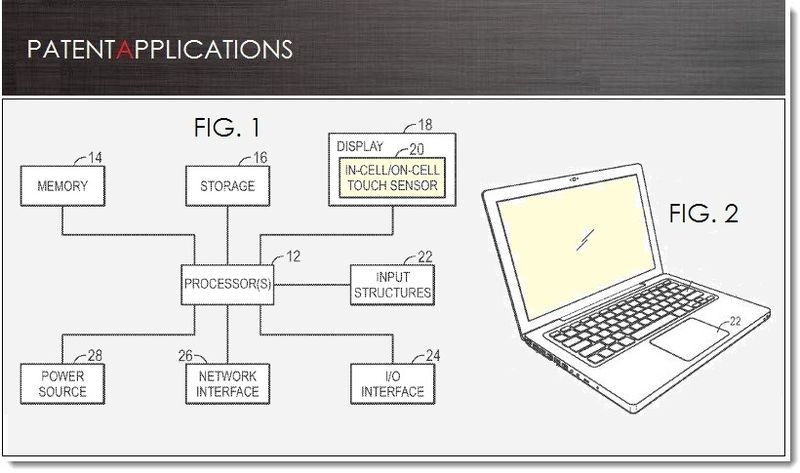 During Apple's iPhone-5 event in September 2012, Phil Schiller introduced Apple's new, highly advanced "Integrated Touch" display that was one of the upgrades that made the iPhone 5 so much lighter than previous generations. Today, Apple's In-Cell display patent application has come to light. Yet perhaps the real story here is that Apple has clearly stated that this technology could apply to Macs and went out of their way to list the MacBook Pro, MacBook Air and even a future iMac. So contrary to Tim Cook's adamant position that Apple has no interest in creating a hybrid MacBook-iPad variant whatsoever, today's patent filing shows that Apple's engineers were obviously given different instructions that contradict Apple's "marketing position." If the new Ultrabook Convertible segment becomes a run-away hit over the next 24 months, it's clear that Apple has a backup plan, just like they did when the 7" tablet segment proved to be the consumer's sweet spot. I personally have my fingers crossed that Apple will surprise us on this front sooner rather than later. Hey, a guy could dream can't he?

Is Apple Hinting at an Ultrabook Convertible Type of Notebook-Tablet?

Apple's patent filing specifically states that suitable electronic devices for In-Cell MultiTouch displays include "a notebook computer or a handheld electronic device." Our cover graphic illustrates patent figure two which clearly points to a MacBook as being a prime target for this technology. In fact Apple goes out their way to actually list a MacBook, MacBook Pro, MacBook Air and other computers such as the iMac. Can that be any clearer? Apple's patent FIG. 7 illustrated below is a circuit diagram of switching a display circuitry of pixels of an LCD; FIG. 8 is a schematic block diagram illustrating an in-cell touch sensor subsystem of an LCD.

Apple credits Youngbae Park, Cheng Chen, Shih Chang and John Zhong as the inventors of this patent application which was originally filed under serial number 213156 in in Q3 2011.